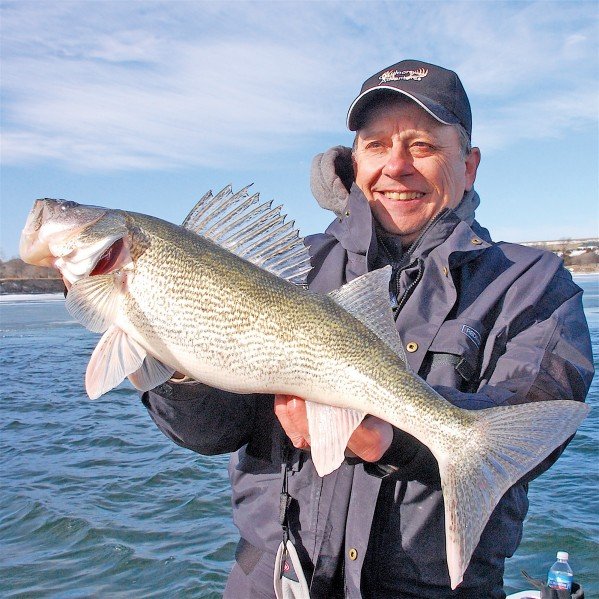 "Of the Outdoors" Columns | Gary Howey-NE. | Gary’s Thoughts from the Field

Early walleye fishing can be tough, with the heavy winds pounding the water, it seems to just guarantee a lack of success.
It doesn’t have to be that way as the fish are there, and they’ll bite if your presentation tempts them.
In a normal year, the warming water brought about by a warming sun and temperatures get things moving.
Find the warmest water in the lake and you will find walleyes, largemouth or smallmouth bass and panfish willing to bite.
I have a suggestion that has worked well for me over the years under the toughest of conditions. It works best when fish are relating to a depth change, going from shallow to the deeper water. in shallow water, it is the simplest of presentations.
It’s been my go-to set up since the 1970s. So, it is nothing new, I am afraid most angler have simply ignored or forgotten about it.
It’s the split shot rig is a simple hook on the end of your line above the hook, 15 inches above the hook I use a small split-shot
For walleyes, attach a medium sized minnow to the hook. For bass, either largemouth or smallmouth, use a small worm hook and rig a 4-inch worm (I prefer Berkeley Power Worms) rigged Texas style.
Pretty standard fare, but let’s take a look at the rig itself.
Years ago, we simply used an Aberdeen style gold hook, either a Mustad or Eagle Claw, in size four. That will still work just fine, but another hook option is the short-shanked, up-eye hook used most often for walleyes, I like to bait it with a smaller minnow.
There are a couple different kinds of split shots, with some come with short “ears” which can open the split shot after it is attached to the line. These are really handy, but those little ears tend to hang up when used on rock-rubble areas and while they do not snag up very often, the little pulses they send up the line as they tap the rocks is irritating. I much prefer to use the simple, round split shots, it tends to move across the bottom much better and will not pick up any weeds or other debris.
I think line is very important in the split shot presentation. Certainly, don’t use anything above six-pound test. There’s not much weight to get you down on the bottom so smaller diameter line is best, while it may be splitting hairs, I prefer fluorocarbon line, about ten feet not only because it is nearly invisible to the fish, but because it sinks monofilament floats. As I said, a really little detail, but successful fishing is often brought about by little details.
Another line which works well with this method is Fireline. I like Crystal in
six -pound test which in diameter is equivalent to two-pound-test monofilament. I don’t tend to use a fluorocarbon leader with this line, but if you prefer a 30-inch piece of six-pound-test fluorocarbon line attached with a pair of uni-knots will work well.
By the time you read this, most walleyes will have already spawned, yet you should still seek out spawning areas because not all walleyes spawn at the same time, and the smaller males will stay on the spawning grounds for at least a couple of weeks.
So, in natural lakes look for rock, rubble areas associated with the shoreline. Fish water from about four to ten feet. Slow is important this time of year and one advantage of the split shot rig is it will force you to fish slowly as you want to be on the bottom, with slow rolling techniques working the best.
Don’t work in a straight line. Walleye waters this time of year are very clear and even if they are not, walleyes will spook out from under a boat in shallow water. If you troll in a zig-zag fashion, you will be pulling your rig over water you haven’t covered with your boat.
For smallmouth, find a rock reef or rocky shoreline and cast the rig and let it settle to the bottom. Then slowly lift and drop all the way back to the boat. If you feel a fish, drop the rod tip, reel in the slack and then set the hook. Largemouth this time of year will be on flats with newly emerging weeds or clumps of still-green weeds from last year. Also look for them in shallow canals or shallow bays.
I prefer rather long, light rods for split shot rig fishing, with six-and-a-half-foot or seven-foot, medium light action spinning rod is perfect. The longer rod will allow you to hook fish better because a lot of slack can develop in this rig so the extra length can mean the difference between hooking up to a light biting walleye or missing the fish.
The drop shot rig is probably the beginning of “finesse” fishing applications, even though it was being used far earlier than when the word “finesse” was applied to fishing techniques. And this one is unique to upper Mid-West waters.