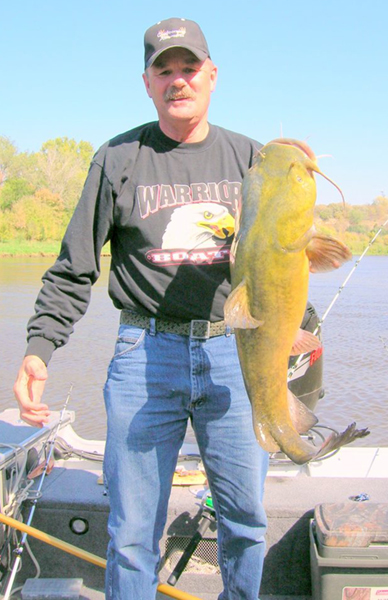 Coming in all sizes, in several places up to 600 hundred pounds, these hard fighting monsters of the deep are the bottom feeding catfish.

Catfish are a varied group of fish, named because of their barbells, resembling a cat’s whiskers; as they have poor vision, they use their tremendous sense of smell and taste to locate food, with taste buds located throughout its body, with the four barbels “whiskers” that surround their mouth having large concentrations of taste buds.

There are over two thousands varieties of catfish in the world, with the largest species located in the Mekong Delta of Southeast Asia these fish can reach nine foot in length and weighing over six hundred pounds, with a six hundred forty six pounder taken in the Mekong in Thailand, while Europe’s Wel’s catfish which can get up to 15 feet long and weigh 300 to 660 pounds.

Then there’s the South America’s Paraiba catfish that can get up to twelve foot long and weigh up to four-hundred fifty pounds.

In the U.S. there are three catfish anglers pursue, the Blue, Flathead and the Channel catfish. The largest Blue catfish taken in the states came from the Missouri River in 2010, it weighed in at one hundred thirty pounds while the largest Flathead catfish, caught near Independence, Kansas, was a one hundred twenty pounder.

Their smaller cousin, the channel catfish, came from Santee-Cooper Reservoir in South Carolina in 1964, a 58 pounder.

In Nebraska, the state record for the blue catfish came from the Missouri River near Decatur, Nebraska weighing in at one hundred thirteen pounds, while the flathead record is eighty pounds and was caught in the Loup Power Canal near Genoa using a Carp for bait.

The state record Channel cat came from Merritt Reservoir and was taken on a night crawler tipped the scales at forty one pounds eight ounces.

South Dakota’s state record blue catfish came out of Big Sioux River, a ninety nine pound four ounce fish, while the state record flathead tipped the scales at sixty-three pounds eight ounces and was caught in the Jim River as was the state record channel cat, a fifty five pounder.

What does the catfish eat, they’re omnivorous, and what they eat varies with the blue feeding on vegetation, clams, birds, snakes, frogs, muskrats, fish, aquatic insects, mulberries, and even corn.

Flatheads feed on insects, crayfish, clams, small fish, including sunfish, shiners, and shad, anglers after flatheads use livebait including bullheads, bluegill and other sunfish when baiting their set lines and when rod and reel fishing.

The channel catfish is not a picky eater, feeding on snails, insects, crayfish, algae, plants and stinky concoctions like Sony’s stinkbait.

You can’t believe everything you read about catfish, as most sources indicate that catfish are nocturnal feeders, feeding mostly at night.

Over the years, I’ve found that feed throughout the day, as my fishing partners and I have taken good numbers of channel catfish during the day, using stinkbait, crawlers and shrimp.

When fishing for catfish, it’s a good idea to use heavier tackle, on my catfishing rods, I use a larger baitcasting reel spooled with fifteen pound test and at time larger, a 3 ounce slider sinker, a good snap swivel and then depending on what species I’m after, for fatheads and blues I use up to a 5/0 circle hook for live or cutbait.

When after channels, I rig it the same as I would for the other catfish, only going with a smaller 1/0 hook or a stinkbait worm rig

Catfish like to set up around snags, out of the current around downed trees or in deeper water; we look for snags on or near deep water, where the snag above it creates a slack water pocket where the fish wait for something to eat.

I fan cast the area below the snag, working from the outside where the current comes up against slack water, towards the shoreline and once a fish catch, I’ll continue fishing that area and once it slows down, I’ll work my way along the snag towards the shore.

Once a catfish is on, they head for the bottom, many times into a submerged snag and if you aren’t able to pull them out, feed the fish line and many times they’ll swim out of the snag into the open water allowing you to bring the fish to the boat.

I’ve also drifted the fast water below Gavin’s Point Dam, using either my big motor or trolling motor to slow our drift, working the bait up and down.

We use crappie rigs baited with chicken liver or minnows and in order to keep from getting snagged, use a large rubber band from the bottom snap to the sinker, doing this allows us to not lose as much tackle as once snagged, you can simply pull back and if you’re lucky pop the rig loose, if not, you can break the rubber band and only lose your weight.

It’s a little tricky as the bottom below the turbines is rocky and you can lose a lot of tackle, if you let your rig drag on the bottom.

By fishing vertical, you can feel the bottom and when you do, keep bringing you rig up and down as you drift with the current.

You don’t need to fish from a boat to catch channel catfish as they can be caught from the shoreline, and because you aren’t fishing in heavy current, you aren’t going to need a heavy weight when fishing the slack water pockets from shore as there isn’t as much current in these slack water areas.

Excellent baits to use for channels are, stink baits, minnows or night crawlers, you don’t want to pack so much or too large of a bait onto your hook as catfish don’t attack the bait, they simply nibble on it, so you want to leave part of the hook exposed, allowing the catfish to nibble on your bait until it takes in the hook.

Some dislike catfish because of the barbs in their dorsal and pectoral fins as they do sting if you happen to get poked by them, to make the pain go away, simply apply some of the slime from the fish and the pain will quickly subside.

We fillet all our catfish using an electric knife, using a Mister Twister Electric Fisherman Knife, to begin with make your initial cut beginning right behind the gill, working along the bones until you get to the tail, flip the fillet over, then  slid the blade between the skin and the fillet.

The final cut is to remove the small amount of bones left on the fillet from initial cut and then, you’ll have a boneless catfish fillet.

Catfish are excellent eating, especially if coated with a light breading, salt and peppered to your taste and fried in oil or deep fat fried.

These fish are one of the most underutilized fish swimming in our waters, easily caught, making for some fine eating, so why not catch a few catfish and find out what you’ve been missing.