Calling turkeys is a learned skill By Larry Myhre 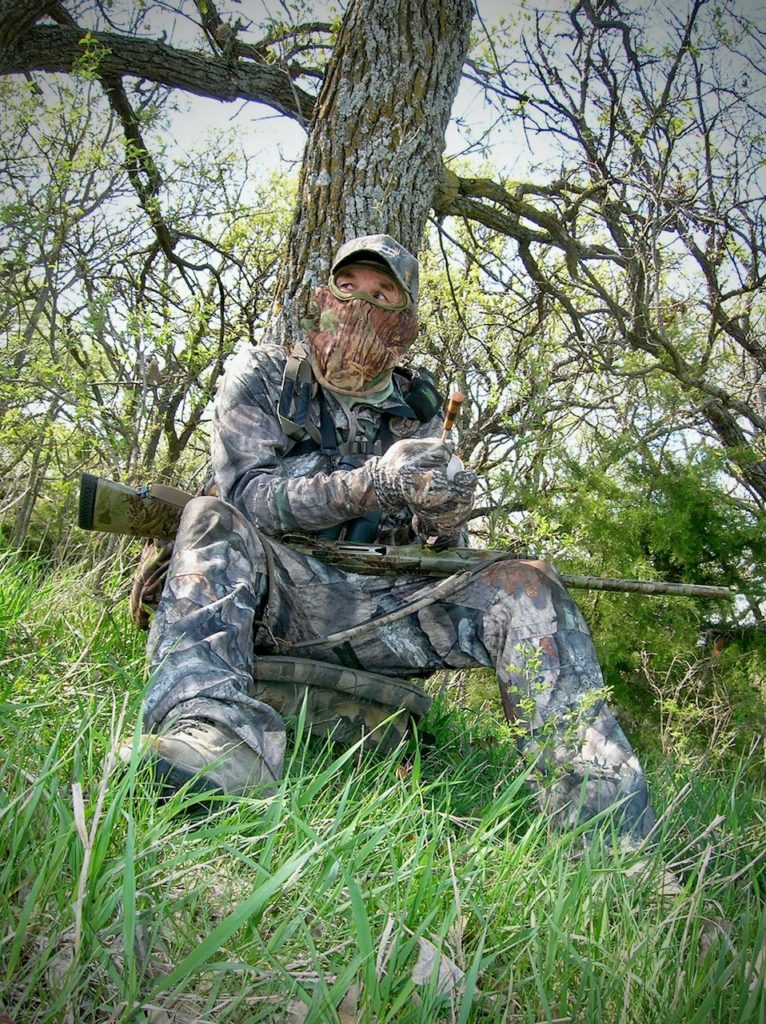 The slate call is one of the most effective turkey calls out there. It should definitely be part of your turkey calling arsenal. However, like most friction calls, it takes two hands to operate and tom turkeys can spot unnatural movement and run away. When a tom answers and begins walking in, switch to a mouth call. (Larry Myhre photo)

One of the biggest attractions of turkey hunting to me is the art of calling. Yes, I believe calling is an art form, and the better you are at it, the more your chances of success increases.

Having said that, it’s hard to make a turkey calling mistake. There are a few and we’ll get into those later. Also, don’t feel you have to be a virtuoso to be a successful caller.

I remember sitting in the woods several years ago and hearing a hunter approaching my set-up. The calling was pathetic and I remember feeling sorry for the hunter, obviously a beginner who needed a lot more time practicing.

Imagine my surprise when a hen walked in instead of a hunter. That was the lousiest turkey talk I had ever heard and it was coming from a real turkey hen.

I do think it is a matter of pride on the part of the hunter to be the best caller he can be. And today there is no reason not to be. When I started hunting, there was no internet. There were no turkey hunting shows on the television. You learned from books or from the writing instructions on the calls you purchased. There were a few cassette tapes out there you could buy with instructions. But today every possible type of turkey calling instruction can be found on the internet.

There are a wide variety of calls out there and most turkey hunters will have an assortment of them. The oldest call is the friction call. Many of the old flintlock shotguns have a spot on the stock where the finish was rubbed off. A hunter could chalk that up and scratch it with a peg to make turkey sounds.

That was probably the origin of the slate calls we use today. Slates are also known as “pot” calls because the slab of slate (or fiberglass or aluminum) sits on a shallow pot which amplifies the sound. You can make every turkey sound on these calls, and they are very popular. Downside of the slate is that it requires two hands to operate. One hand holds the slate, the other the “striker,” usually a wood or graphite peg which you must scratch along the surface of the call to make the right sounds.

One thing to consider when using these calls is that the closest to the edge of the pot you scratch, the higher the pitch. So, if you want to imitate a tom’s deep, guttural yelp, scratch near the center of the pot.

I’d guess the most popular turkey call is the box call. It’s real easy for a beginner to use and in the hands of a pro it makes really sweet turkey music. Box calls, as their name implies, is simply a slender box with a movable lid. By scraping the lid along the edge of the call you can make any sound the turkey makes. The lid, and the edges of the box across which the lid slides, must be chalked to get the best sound.

This is the “go to” call of most turkey hunters. All sound a little different depending on the wood they are made of, but I’ve never found one that didn’t make good turkey sounds.

Another thing to be aware of with box calls is that there are really two kinds and each has a distinct purpose. The regular box call is rather “boxy” and somewhat shorter than the other type, which is commonly called the boat paddle call. The box of this call is longer and more slim than the regular box. It sends out a higher pitched call which really carries through the woods. It is the loudest of all calls. Just the loud sound of one of these calls will often make a turkey gobble.

They are also the best call to use on a windy day when sound doesn’t carry as far. Always hunt into the wind while searching for a bird because you can hear he gobbles upwind a lot better than downwind and call frequently.

The downside of the box call is if it becomes wet, it won’t work. Many manufacturers offer waterproof calls which have always worked well for me as well.

The diaphragm call, also called the mouth call, is probably the most difficult to learn. It is a small, horseshoe shaped call with a latex reed stretched across it which will vibrate to make the sounds. Most hunters struggle a long time to learn to make the right sounds, but, like riding a bike, once you get it down it never leaves you.

The big advantage to the mouth call is that you never have to use your hands. If I’m on stand and a gobbler is coming in to my friction call, either slate or box, I set it down and get the gun up and begin using the mouth call to close the deal.

In fact, I keep a diaphragm call in my mouth the entire time I am hunting, even if I’m using another call while stalking through the woods. Changing up on calls is a good thing. Some days a gobbler will respond to one call better than another.

For beginners, a single reed call is a good place to start. These are the easiest to make sounds. As you get the hang of it, switch to a double reed. You may never use another. But, there are triple reed calls and more, each more raspy than the other.

There are many other types of turkey calls, but these are the most often used.

So what are some mistakes you can make when calling. Well, putting when you are trying to cluck. The putt is the alarm call of turkeys and it will send them running. Before you cluck make sure you are doing it right.

Calling too loudly to a close-in tom may send him running. When a tom is coming in, shut up. He has made up his mind and doesn’t need any more enticement.

Always use a variety of turkey calls. Same ole, same ole, will turn off skeptical toms.

But perhaps the biggest mistake is not practicing enough before your hunt. Calling is a learned skill, not unlike learning a musical instrument. You don’t have to be perfect, but it helps.