How Times have changed 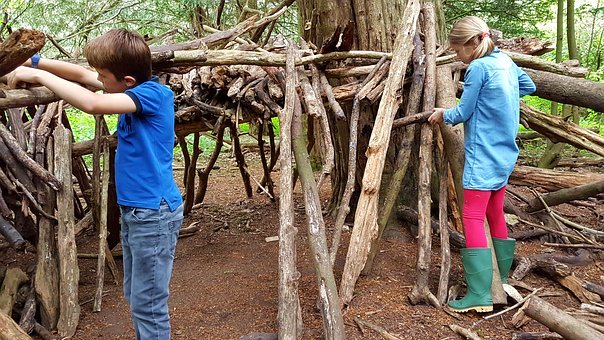 As a kid growing up, the author Gary Howey spent numerous hours along the Sioux River, only a block from our house, building forts, as these kids are doing, fishing and just goofing around. As long as we were home in time for meals and respected our parents and others there was no need for us to be supervised. (Bing.com contributed photo)

Time goes by so quickly it’s hard to understand the numerous things that are happening in our country today, things that didn’t seem to happen as I and other Baby Boomers were growing up.

When I was a youngster growing up in Watertown, S.D., things were different; we played outside, rode our bikes and generally didn’t need to be in the house until the streetlights came on.

My brother AJ and I spent a lot of time with our BB guns down by the Sioux River where we made our forts, fished spending numerous hours just being kids or hiked out to Lake Pelican and as long as we let our folks know where we were going and had a set time to be home for supper. We didn’t need to be supervised, and if we didn’t play by the rules, we were punished, sometimes by the paddle or would lose our freedom of being outside, being grounded and given extra chores to do.

When I entered Watertown Senior High in the 60’s, I had a school permit, and as I pulled into the parking lot, it was nothing to see shotguns and 22’s in the gun racks of the kid’s vehicles they drove to school as once school got out, there was plenty of time to road hunt pheasants on our way home.

Now days, we would have been in deep trouble even mentioning that we had a weapon in our vehicle.

Today, things seemed to be so messed up, teachers can’t fight back if attacked in school and there’re calls for defunding the police, with riots destroying some of our cities, buildings being burned, memorials being defaced or destroyed with businesses being looted while the police’s hands are tied, unable to do anything.

When I was young, we had respect for our teachers as I learned at a very young age.

I was having trouble figuring out one of my classes, so the teacher stayed after school to help me figure it out, things were going well, but after a half hour, I was stumped on one of the problems, with my teacher going over it several times and after a half hour or so, I told her I’d had it, and backed away from the chalk board, ready to leave, my teacher indicated I couldn’t go until I figured out the problem, I turned to walk away, just in time to have a chalk board eraser bounce off the board and catch me in the eye, my last words to her were,” you just wait till I tell my Mom & Dad, then you’ll be in trouble.”

I charged out the door and down the steps to freedom, where I told my Mother about it, maybe, not exactly as it happened, but close.

My Mothers first words were “wait until your Dad comes home” which I thought meant that Mom would Talk to Dad, I’d explain once again what happened and we’d go to the school where the folks would straighten out my teacher.

Nice Try, as once Dad arrived, and the folks asked me what I was doing after school, I did my best to explain to them it was cruel and unusual punishment.

Dad made a call to the school talked with my teacher, while I sat on a chair and was given the third degree by my Mother.

When Dad hung up, I knew I was in trouble as I had disrespected my teacher and if we had a wood shed, I’d be out there being disciplined.

As I went to my room, after being reintroduced to the paddle, I never ever disrespected anyone again.

In one of our larger cities, Seattle, having several blocks taken over by protesters and hoodlums, with the mayor, city council and police doing nothing about it, What the Heck!

What next, I’m afraid to even think about it, as the liberals are doing everything they can to destroy our country.

In the good old days, After we went through our hunter’s safety course where we not only leaned all the safety rules and some of the laws, we had the opportunity to shoot 22 rifles, with this class being run through our school system and we couldn’t wait until we were old enough to go hunting with our Dad.

We weren’t really hunting, more like kicking up and retrieving birds as all we could carry was our BB guns, but we felt that this was the next step to becoming a hunter.

We have a second amendment, the right to keep and bear arms, which allows us to protect ourselves and our family as well as giving us the opportunity to spend time in the field, target shooting or hunting.

As kids, we all had BB guns, we used them to shoot gophers, unprotected bird species and targets, If I or one of my friends in school went walking down the street now days with a gun, even a BB gun, the police phone lines would Lite up as the American public has been bombarded with propaganda about guns and even the mention of them causes a panic.

Each year in every state, thousands of individuals go out into the woods with guns, deer hunting, and no one gets shot, the reason for this is the fact that these hunters are law abiding citizens.

I’m so thankful that we live where we do, away from the big cities and all the trouble that comes along with them.

God forbid if the liberals in our country ever try to take away our guns, it won’t be pretty and with all of the junk going on now days, I’m dang glad I have my guns, not only to protect my home and family, but also my business.

By taking away our guns, the only ones who will have them are gangs, the outlaws, those who wish to get what another has, to rob and take another’s life, all of which will have obtained their guns illegally.

It’s a fact, that guns can’t kill people unless a human being is behind it and the strict gun laws we have now don’t seem to bother those that would do us harm, and with some of the loose judicial interpretation of the law, it doesn’t seem that there’s much punishment for those who do break the law.

Hopefully after the next election, we’ll have individuals that won’t put up with all that we have happening now

Gary Howey, Hartington, Neb is a former tournament angler, fishing & hunting guide, an award winning writer, producer, and broadcaster,  inducted into the “National Freshwater Fishing Hall of Fame” in 2017. He developed and was the Producer- Host of the Outdoorsmen Adventures television series for 23 years and is the Co-Host of the award winning Outdoor Adventures radio show. The new Outdoorsmen Adventures television series begins its thirteen week season on Saturday April 4 at 11:00 am on KCAU-TV, Sioux City, as well as on numerous Independent stations throughout the upper Midwest.  If you are looking for more outdoor information, check out garyhoweysoutdoors.com, outdoorsmenadventures.com and like Gary Howey’s Facebook page and watch the shows on the MIDCO Sports Network, News Channel Nebraska and on the Outdoor Channels www.MyOutdoorTV.com