Decoying Through the Ice Gary Howey

I was fishing on a farm pond northeast of my hometown and just had my Vexilar transducer placed into the hole over the top of six foot of water. The first thing I look for is the red marks on my locator screen, indicating there are fish below me. If I do not see those tell tale signs, then I have to do something to draw or decoy the fish in!

I always have two rods rigged and ready to go when I am ice fishing; one with bigger baits and another with the smaller lure, the first bait I put down will be a larger lure such as a Northland Buck Shot spoon. I’ll let it drop quickly towards the bottom, stopping it a couple of feet off the bottom , then allowing it to free fall and hit the bottom; raising it again, then slamming back into the bottom.

Now that I created a disturbance on the bottom, something the fish can see, it is time to get down to business. As the silt off the bottom settles down, a red blip appeared, indicating a fish has come over to see what caused the disturbance. I slowly raised the bait above it and the fish followed. I let the bait set there motionless and then jiggled it a bit. Wham, the fish hit and hit hard, I set the hook and it was all my little rod could handle as the fish peeled line off my reel.

I yelled for my fishing partner to pull the transducer out of the hole as I had my hands full fighting the fish, but before he could get there, the line wrapped and the fish, probably a big bass broke off.

Well, back to work, down went my spoon, setting just off the bottom and as another red blip appeared on the screen I raised and lowered my bait trying to entice the fish to bite, it would move with me, but not take the bait.
I quickly switched to smaller bait, tried the same trick and iced one of several Bluegills, which would soon be lying on the ice.

What I was doing was decoying fish under the ice, creating a disturbance in the bottom, drawing fish in, then taking the aggressive fish with a larger lure and once the aggressive fish were done biting going with a smaller bait to take those not ready to take larger bait.

Decoying fish is not something new, the first person I saw do it was Jim McDonnell, who is no longer with us and probably catching fish somewhere up above catching fish. He would use a spearing decoy to get things riled up and to draw fish into the area he was fishing. The first time I saw him do it, I had to wonder what was going on, but if it brings fish in and makes them bite, I’m all for it.

I do not carry a spearing decoy along with me, but when I first drop into the hole, I’ll use a larger baits, a Northland Forage Minnow Spoon tipped with a couple of wax worms. I’ll let it hit bottom a couple of times, stirring up the silt, drawing attention to the area and then bring my bait up higher, above the cloudy water and as the silt settles down, lower my bait towards the bottom.

With my Vexilar, I can see my bait and any fish that move in under the hole, once one appears, I’ll bring my bait up, hoping the fish will follow, if he does, generally he’s aggressive and will take the bait. If not, it is time to quickly pull the bigger bait and down size to a small Buck Shot Rattle spoon or similar bait.

I will let the bait down to the depths the fish are located and if he does not hit it, bring it up slowly away from the fish. Because the fish did not take the larger bait, I feel that it is more than they needed, so I tempt them with the smaller bait. 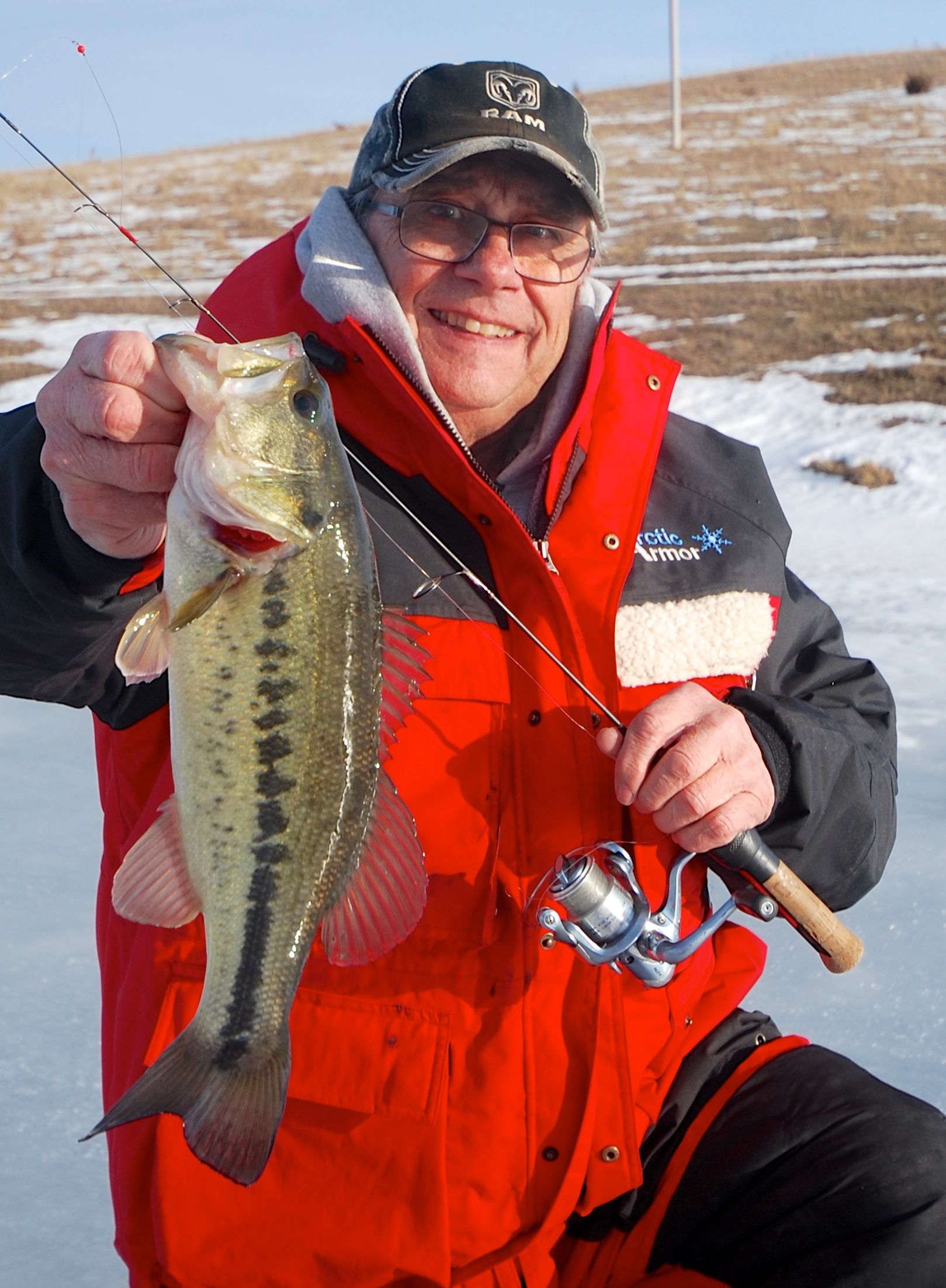 Once again, I raised the bait, let it settle, wiggled it a few times and the fish hit, Fighting the fish with my rod hand, I pulled the transducer from the hole and landed a nice chunky Bluegill.

This method has worked for me repeatedly, with the key, having two rods rigged, ready to go the rod with the heavier lure to stir up the bottom to decoy or bring the fish in and if that bait does not get a bite, getting smaller bait down the hole as quickly as possible.

As with any type of decoying, whether it be big game, birds, deer and even fish, it is much easier, especially when Ice fishing to draw them to you.

There is one other option; you could drill hundreds of holes, hoping to hit the right spot, the area the fish are using!