Dog Gone It! You & you’re Dog By Gary Howey

This is the time of the year, just prior to the opening of the first hunting season when hunters in  our area should take steps to make sure that their hunting dog’s are in good shape and ready when they hit the field on opening day.

Prior to the season, both you and your dog will need to do some walking and spend some time running and working with your dog, insuring your best friend is in shape and ready for that first long day in the field.

As anyone knows whose hunted behind a dog in good shape and well trained will realize, it’s not only an exciting experience, it’s more effective than simply wondering across a field hoping to stumble onto a bird.

Throughout the years, I’ve hunted over all types of dogs and really had some great hunts as well as some very frustrating ones, when a dog we hunted behind was not under control.

I’ve also hunted with all types of hunters, from the very new to the seasoned pro and found out some of these hunters could learn a lot about the sport by simply paying attention to their dog.

Take for instance one hunt in a huge CRP field where we were hunting with several hunters and their yellow Lab.

It’s a known fact that all dogs don’t work the same, they all work differently, some are in high gear, bounding through the tall grass while others will methodically work their way through the grass, their nose just inches off the ground trying to pick up the birds scent.

My dog had his nose to the ground, his tail whirling in a tight circle as he worked through the field, back and forth out in front of all the hunters.

Unfortunately, the owner of the other dog was always yelling at the top of his lungs, trying to get the dog to work in front of him and nowhere else. Which not only confused the dog, but it also let every bird within the quarter section know we were there.

The dog knew where the birds were and it wasn’t always in front of the owner. The owner thought he was a lot smarter than his dog and wanted it to hunt where he was hunting.

When the owner headed for the dog, he had one thing on his mind and that wasn’t to flush a bunch of birds but to reprimand the dog.

When he ran over to drag the dog back he stumbled into the birds the dog was working, totally screwing up our entire hunt and flushing the birds all around him, now well out of range of the rest of our group.

There are times when all dogs get out a bit too far and yelling at them isn’t what you want to do. I’ve trained my dog to respond to a whistle, not your regular whistle, I use a hawk call, the sound a hawk makes as he’s flying over. Not only does my dog respond to it, it also forces the birds to hunker down, as they don’t want to go airborne when predators like a hawk is flying over. 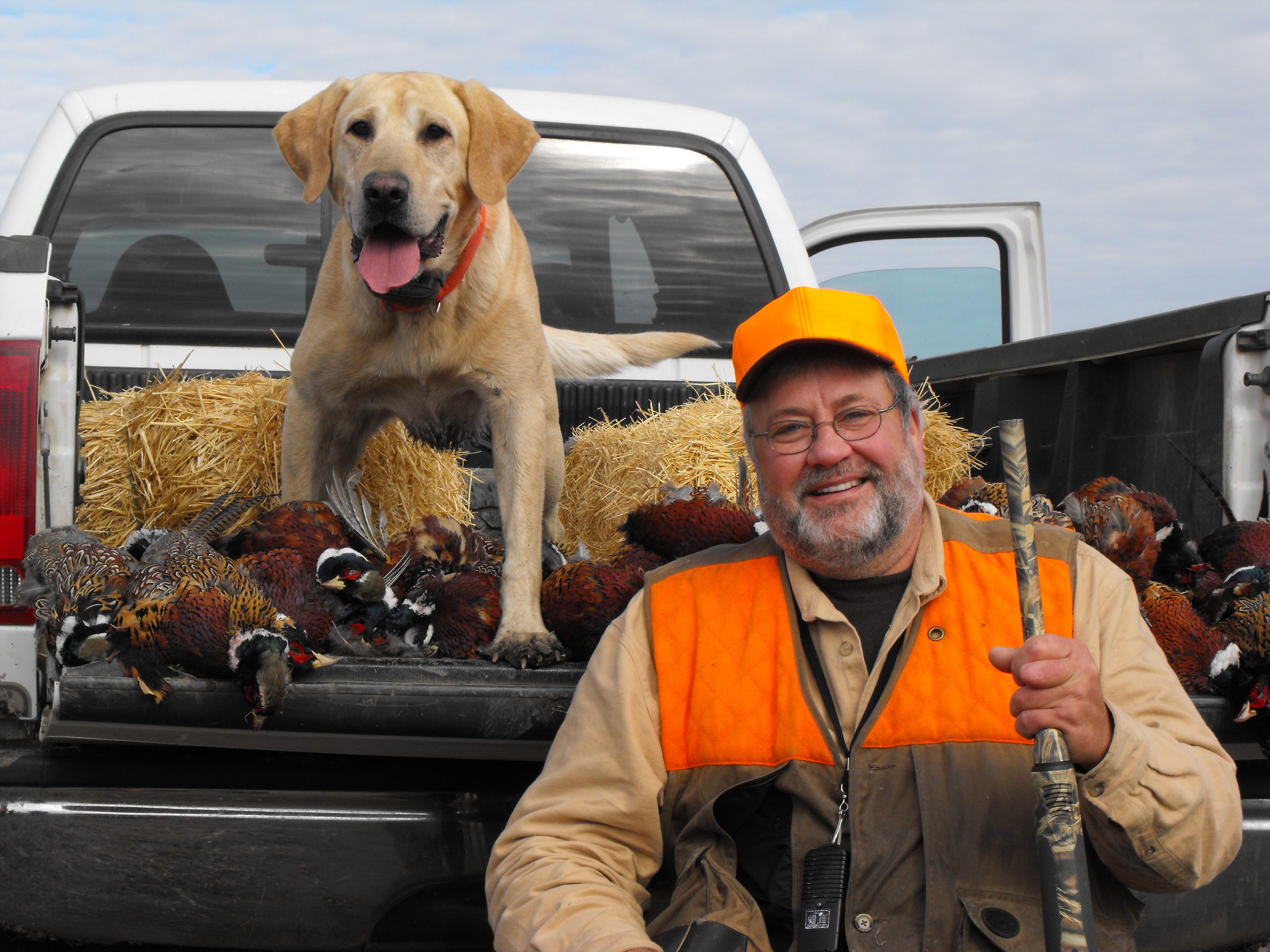 Dan Schiebout, Orange City, IA. and his Lab Magnum after one of our successful pheasant hunts in South Dakota.

There are times; we humans forget that even though we have a larger brain and can work out some of complex problems, other critters in the animal kingdom are better suited for some jobs than we are.

Over the years, after making many blunders myself, one of which was very similar to the hunter I mentioned above, I’ve learned to follow the dog, no matter what direction he’s heading.

A dog’s nose is a hunter’s best friend and by following the dog instead of forcing him to follow you, your hunt will be more successful.

There’s nothing that says we have to hunt our dogs straight across a field. In fact, it’s better, especially in the late season to zig zag across the field.  This makes the birds nervous and forces them to go airborne instead of running ahead of us.

As long as you have your dog under control, meaning he isn’t getting out too far ahead or flushing birds out of range, you can hunt a field anyway the dog wants.

I once hunted with a friend of mine whose black Lab would hit the field on a dead run with his owner right behind him.  This meant that both the dog and the hunter were way out ahead of the other hunters, which is not only a pain for the other hunters; it’s also down right dangerous!

On that hunt, the last I did with him, I had several suggestions as to what my friend could do to control the dog.  One was to use a training collar on the dog, which he thought was a pretty dumb idea.

My other suggestion was to sell me the dog and I’d shoot it putting it out of its misery. He wasn’t keen on that idea either!

As any good hunter should know, we need to start the dog with the wind in his face, and once you head him into the wind, it’s the dogs show.

Then, all the hunter needs to do is to get in behind the dog, keep him under control, shoot well and praise the dog even when he goof up..

Make sure your dog is in shape prior to the season, listen to what your dog is telling you when you’re out hunting and not only will you come out of the experience a more intelligent  hunter you’ll have a much more successful hunt!