For many anglers, this is the time for the slip bobber set-up, but over the past several years I have been using a method that just about everyone knows about but almost no one is using.

That would be drop shotting.

The method first burst upon the professional bass tournament trail probably around 20 years ago. Perfected in tough, clear fishing waters of Japan, the bass pros soon learned that it was a dynamite system over here as well. It was a closely guarded secret for years. But, eventually the word leaked out.

I don’t remember the year, but I was introduced to the technique by one of the pros at the Berkely Company. We fished West Okoboji and caught smallmouth, walleye, perch and crappie using the technique.

I could recognize the potential this system had for any of a large number of gamefish. In those days we simply used long shanked Aberdeen hooks and large split shots for weights. Although I rigged up a small plastic box just for drop shotting, I seldom used the system. That was a mistake. Over the years, special weights and hooks designed for this system were developed and are widely available today.

In case you are not familiar with the system, let’s go over it. It is your basic hook, line and sinker setup. You tie a hook on the line using a Palomar knot, which will cause the hook to sit out parallel to the line. You leave a long tag on the line and slip it through the eye of the hook and, let’s say 12 inches below the hook you attach a sinker such as a large split shot or two.

I’ll try to explain how to make this rig in more detail. You want the hook point to ride up, so begin the Palomar knot by passing the line from the top side down through the hook eye, and then bring it back through from the bottom, leaving a loop under the hook. Then, using the loop, tie an overhand knot and slip the hook through the loop it creates. Pull the knot tight. Next, pass the tag end of the line through the hook eye from the top side down, tighten it and attach a drop shot sinker or large split shot.

If the sinker snags up, it will simply slide off the line, so you will not lose the whole rig. 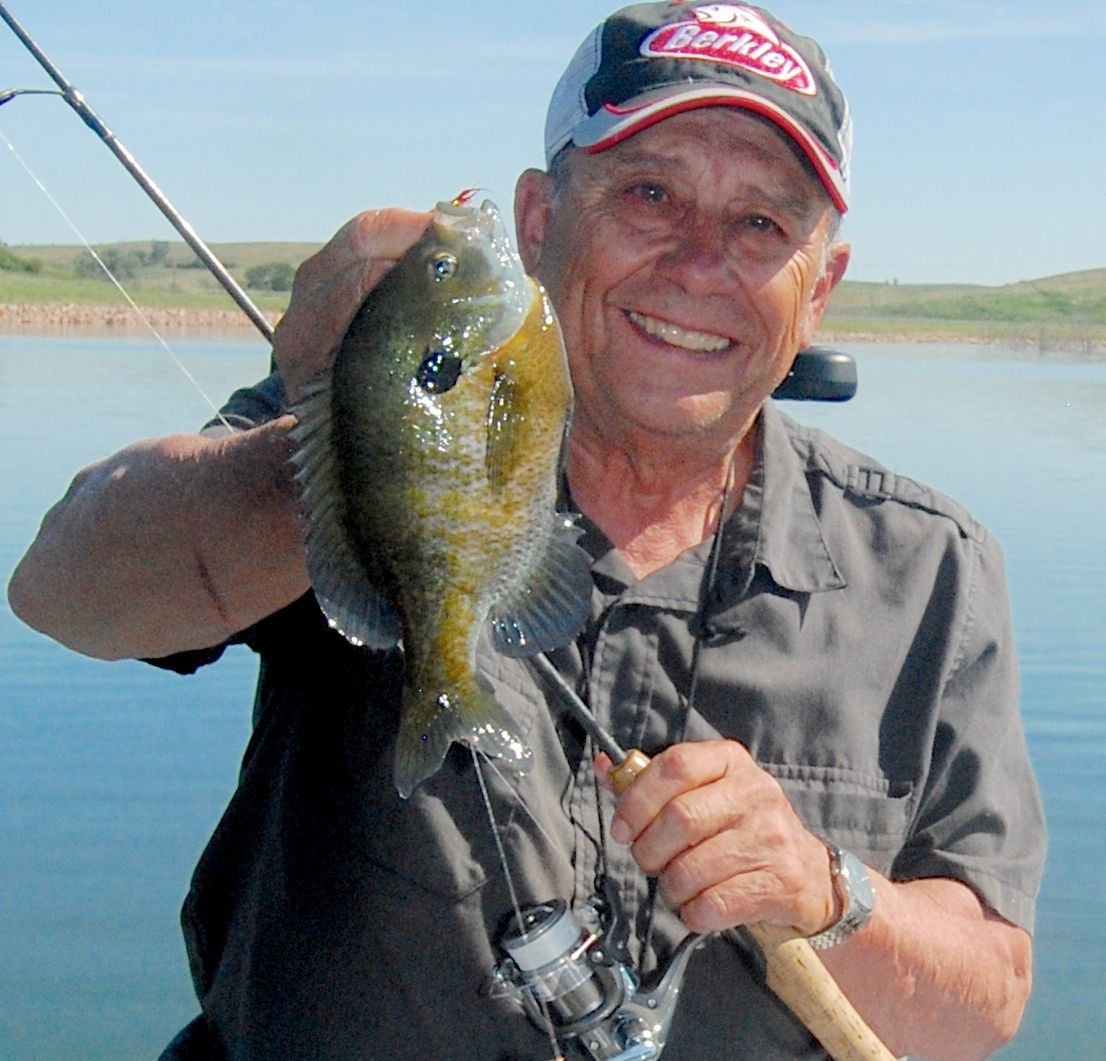 When fishing from a boat you present the bait in a vertical position, letting the sinker reach bottom, then you just hold the rig there and shake the tip of your rod. That causes your bait to wiggle and attract fish. You ease slowly around the structure or weed bed, keeping the sinker at or near the bottom.

The big disadvantage to this system is line twist. If you retrieve the bait slowly that will help. There are now special hooks designed with their own swivels above and below that mostly eliminate this problem.

While drop shooting was designed as a finesse fishing tool, it is a mistake to think of it in that way. You do not need to use the light line approach. I often fish it on 10-pound test line.

When fishing panfish this time of year I usually use six-pound test.

For panfish you can use the small plastic bodies often used for ice fishing and tip the hook with a grub or small piece of crawler. Since I tie flies I often tie up my own bodies on the size six Aberdeen hooks that I use. I like a body of black and yellow chenille, a wisp of fluorescent red floss for a tail and a black hackle palmered over the body. I also tie others in all black.

Some anglers use a jig for a weight rather than a sinker, but I think that is a mistake. You tend to snag up a lot more. If you want two hooks on the line, tie in another just above where you will attach the sinker.

While most anglers use the drop shot rig for vertical fishing, it can also be cast with success whether you are fishing from shore, a dock or a boat. Simply cast it out and let the sinker settle to the bottom. Drop a little slack into the line and jiggle it a bit, then slide the sinker another foot or so and repeat.

That method can be very productive for perch or other panfish along the shoreline. You can also fish it vertically from a dock and catch a lot of panfish.

But this time of year I’m usually out in a boat fishing the drop shot along a weed line or over a rock pile. Big panfish will be found in both places and the drop shot will be a key element in catching

More outdoor information can be found at http://siouxcityjournal.com/sports/recreation/outdoors

← Prev: Pre-Season Scouting A little thing that really Pays Off By Gary Howey Next: Dog Gone It! You & you're Dog By Gary Howey →