I like many other hunters throughout America were patiently waiting for the opener of the most popular game bird early hunting season, the dove opener, which would be September 1.

Scouting is an important part of any hunting and I had scouted for doves on every trip I made to the field.  Several of my game cameras were on covering my minerals licks in an adjacent field and each time I came into the field the fence lines between the two CRP fields were covered up with doves.

As the end of August started to draw near our temperatures surely did not feel like August, as the days were comfortable and the nights cool. Which is not good if you are looking forward to the dove opener as cooler weather, northerly winds and the threat of rain make the doves’ bunch up and if the weather persists, the birds may move out, migrating south to beat the cold weather?

When opening day finally arrived, and  as I waited throughout the day to get out and do a late afternoon hunt. All my dove hunting gear was loaded into my Dodge Ram pickup, but as the day drew on, the clouds started to build and a steady drizzle appeared, getting worse as the day drew on.

I’m not one to give up easily, so I stopped by the office to grab my rain gear and headed west out of town, hoping to see does piled up on the fence and power lines.

As I approached the field entrance, it did not look good as there were but a few birds to be seen and many of those that I saw were tweedy birds, not the doves I had hoped to see.

Topping the rise, I could see the refection of the farm pond off in the distance, but the fence line leading to it was barren, not even a single tweedy bird. “Oh Well” I came this far, might as well open the gate, go through the pasture and see what needed to be done to make the area I’d be hunting more appealing to the doves.

There had been cattle in the pasture, so the weeds along one side of the dam were tramped down or absent, perfect for the short-legged doves, as it allowed them easy access to the water.

All along the face of the dam, the doves favorite food had taken root with an over abundance of Hemp (Marijuana) and ragweed growing there, as doves love nothing better than to stuff themselves with these tiny seeds.  Because the water was close by, it should have been the perfect place for the birds to be prior to heading to their nighttime roosts.

When hunting I am a believer in decoys, but especially when going after doves as a hunter does a lot of moving when hunting these small acrobatic birds. If they come in low, they are almost impossible to see, so you are always cranking your head around, squinting you eyes, moving,  hoping to see them above the horizon as they come in. 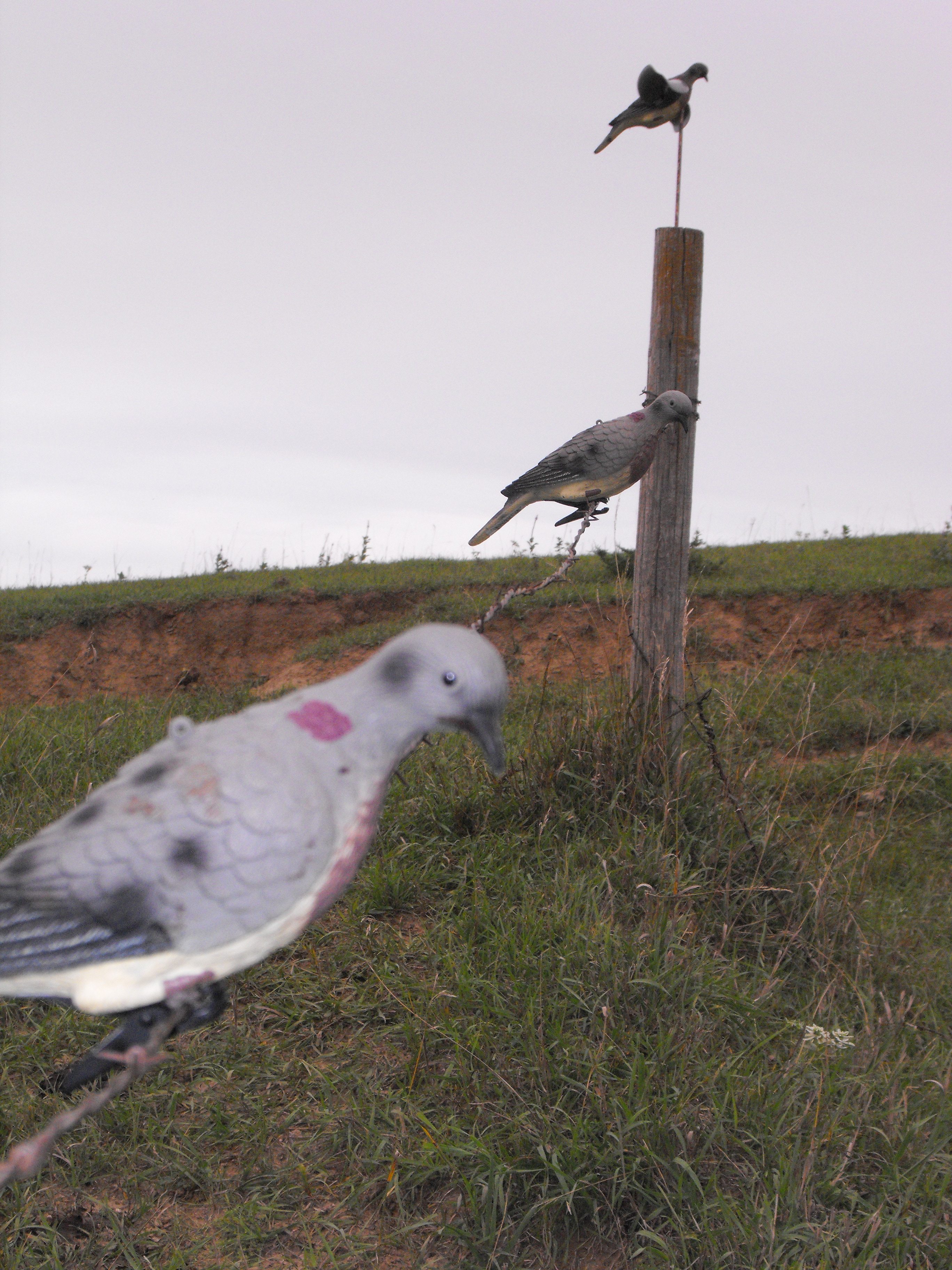 Using decoys, no matter what species you are hunting, allows a hunter more movement as the animals, the doves eyes will pick up the decoys and their movement well before they spot the hunter.

I you have a few decoys out, maybe, just maybe the bird will be watching the decoy and not the hunter.

I have used several decoys over the years, the type you clip on a fence or attach to a leafless tree, as well as the motion decoys. My first one was a well-advertised motion decoy, but needed to drag along a small battery to make it perform and I did not need any more things to tote into the field. The newer models of these now are powered by D-cell batteries and self-contained.

I use the wind driven decoys, as they are quick to set up and work well in even a light wind. I did replace the stakes with a couple of my old aluminum arrows as they were easier to push into the ground and the smaller diameter allowed my decoys to move from side to side easier.

If I’ am hunting along a fence line, which I like to do as it makes it easier for my clip on dove decoys and gives incoming doves a place to land.  If there’s a wood post with wire wrapped around it, I will wedge my arrow in between the post and wire and attach my wind driven decoy on top of it. Having the wind driven decoy up in the air allows incoming birds to spot it even when they are too far away from the water for a shot.

My wind driven decoy is on the uphill side of the post with one or two clip on decoys attached to the wire running down to the water.  The only problem I have had with these motion decoys is when the wind is blowing hard, they have a tendency to take flight and fly off the stake.

As the rain came down, I readied the sight for my next day s hunt, stringing some barbwire between a wooden post and several posts. I also took two large broken limbs from a brush pile and wired them to a couple of posts, one of which I would hunker down behind when i came back to hunt.

The only worry I had about this sight was the large pond as in most instances, the birds come in over the water with the majority of the birds you shoot end up splashing down in the pond. This and the fact that doves are not very big make them hard to find even in a heavily grazed pasture.

This would be the first year that I have ever been dog less having hunted without out my dog MO JO and he loved to swim out and retrieve the birds from the water. Because doves do not have much of a scent, unless they came down hard and left a feather trail, even the best dog would have trouble finding them.

The following day, Saturday the 2, looked promising, as the weather was forecast to be warm, which makes the doves come to the water more often as on a regular day when it is not overly warm, they do not show up until close to sundown on their way to their roosts.

The only problem with hunting on the second was that the Huskers played football at 7:00, which is about the ideal time to be hunting them.

I made up my mind that I would like to catch most of the game and after putting out my decoys, nestled in behind a wood post and the heavy branch I had wired there.

The first flight four birds caught me by surprise coming in behind me over the face of the dam, and almost colliding with my motion decoy. However, as they headed away, I managed to pick one of them off with my second shot.

A few more passed over the far side of the water as they glided into a tree on the opposite bank and as I sat there, watching them two more came over the ridge to my left and once again I took one bird on my second shot. I thought to myself, not bad one bird for every two shots as the average said to be one for eight.

Over the next hour and a half, a few birds dribbled in, not the bigger flights that I may have seen if I waited until the sun begun to set.  A man has to do what a man has to do in order to get along, so after bagging ten doves, I loaded up, headed for my shop, and cleaned the birds, soaked them in salt water, getting them ready for the pan and still made it home in time for the game.

The following afternoon after returning from the Newcastle Nebraska Labor Day Parade and Car show, I decided to give it one more shot, telling my wife Cindy I would be back by 6:30 to fry up the doves for supper, which really limited my time.

Fortunately, for me, there was not much of a flight, I bagged three birds with five shells, and walked back retrieved my pickup, loaded up, cleaned the three remaining birds and was frying them up by 6:45.

Doves, which are dark meat, need to be prepared properly and since the only way I had prepared them before was to deep fat fry them, I decided to “Wing” it, grabbed a bunch of seasoning from the cupboard mixed it with some flour and fried them up in some cooking oil over a low flame.

Served with some leftover potatoes and some of my wives cabbage salad, I have to admit, they were darn good.  I offered some to the wife and her comment was “I’m not going to eat those things”, to bad as that left more for me!

Dove hunting is a challenging sport, and an excellent opportunity for you to do some shooting prior to the game bird season.

One thing you will need to do before heading out to hunt these acrobatic doves is to purchase a lot of ammunition as every once in great while either the birds will fly into your shot or you will get lucky and be able to bag your fifteen-bird limit with a box or two of shells.

← Prev: Looking for Wildlife Hunt the Edges By Gary Howey Next: Don't Be Afraid to Try New things My First Deer Hunt By Gary Howey →