Looking for Wildlife Hunt the Edges By Gary Howey

Hunting was not a real big deal in my family, sure, we hunted as kids with our BB-guns and my Dad “Cal” and Grandparents, the Menkveld hunted pheasants but generally, it was on the opener or on the second weekend of the season.

There were a few times my Dad might hunt waterfowl with a family friend, where they hunted out of a ditch northwest of Watertown hunting geese, but that was about it.

Each hunting trip my brother A.J. and I made with Dad was an adventure even if we were there just to help push and retrieve birds, because we cherished every trip with him and the memories they created!

Our first hunting trips were when we were older, around ten, when we had the opportunity to be with Dad, on a pheasant hunt west of our hometown, Watertown, South Dakota.

This was back during the soil bank days when the pheasant population in northeastern South Dakota was unbelievable as they were everywhere.

These trips for us were more of a long hike than a hunt, but it was really something we enjoyed, as we had gotten big enough to hang out with Dad and the guys, to be part of something we had always wanted.

Before we could carry a gun and hunt, Dad wanted to make sure we knew how to handle a firearm safely and would need to go through the Hunters Safety Course. Back then, the course was taught through the school and once we graduated, we hoped to get a 22 rifle to hunt gophers.

As far as pheasant hunting was concerned, we would have to wait until we were older and had our own shotguns, as in our family there was only one shotgun, an old Winchester Model 97 twelve-gauge and for safety reasons Dad would not allow us to use it.

Dad introduced us to hunting on these trips and we were always looking forward to these excursions.

It was not that we were only excited about the annual hunting trip, but before we would meet up with the other hunters; we would always stop at Tinker Town west on HWY. 212 for an early lunch.

This was something special to us, as it was where we got our first “store bought” hamburger and a pop and had an opportunity to see the huge pheasant and burro statues they had there.

Sure, on these trips, we were not really hunting, just sharing the experience, as my brother and I were Dad’s bird dogs, flushing, running down and retrieving birds.

Even though I never had the opportunity to shoot a bird, I could not wait until opening day to spend some quality time with Dad in the outdoors.

After a few years on these trips, I realized that certain areas held more birds and because I wanted to be where the action was, I needed to be with the group of hunters walking those areas.

At times, there was not much difference between one location and another; maybe just a subtle change that held the birds.

As I grew older and started to hunt more, I would always look for these, hunting those subtle changes, as there was something, which drew both the birds and I to these spots.

These areas were not always the best habitat in the field, where the most cover existed and sometimes they would even be some of the poorest cover in the field, but they held birds.

I could not help but notice the same thing when I did some depredation trapping; some areas just had more sign with the critters using these areas more than others did, even the furbearers were relating to them just as the pheasants had. 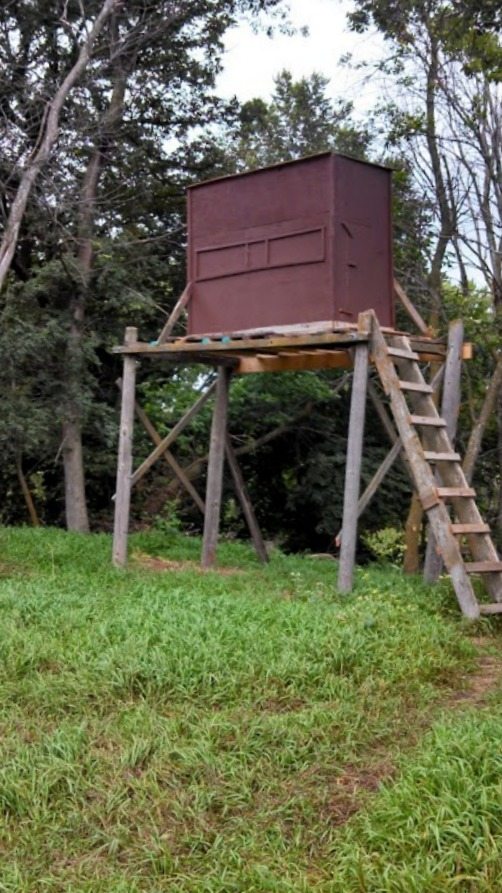 Elevated deer houses and stands set up adjacent to edge or a change in the way the field lies, as this one is with its three different edges allowing the hunter to see the deer using or traveling through the area.

These areas were always where the layout of the field changed, came up against open areas, or against another type of habitat, I referred to these areas as the edge, some type of a change or something that stood out in a field, something different.

It did not need to be a drastic change, just a change, as wildlife was attracted to these areas, just as I was.

It could be a location where cropland comes up against a shelterbelt where the there is an edge, or an open area where wildlife can make a hasty escape if needed or even the smallest difference.

It does not have to be a big change, where a crop butts up against a wet area, slough, or something as simple as a big cottonwood standing out in the middle of a pasture. It creates an edge or a change, these areas attract the animal’s eye just as it attracts ours, they are curious, and they have to go over to see what is there.

All wildlife relates to these edges, and it could be something as simple as a tractor or three-wheeler trail that runs along the edge of a shelterbelt or row crops.

Let us look at it further, say you are coming into an area, with a larger field of continuous grassland, good pheasant habitat.  Then there is an adjacent field that may not have the best cover, but there is a large tree standing in the middle with a few bushes growing around it, some low spots, which are mostly weeds, an open area that butts up against a fence line, a shelterbelt or some brush.

Even though there may be more cover in the bigger field, I would walk the field with the changes. Those with the edges and if my shooting was not the best and I did not bag my limit there, which was happens quite often,  I would move over to the bigger field as that would be where the birds that had moved to after being pushed from the edges on the other fields.

It’s a fact; a section of pastureland where everything is the same will hold less wildlife than a field with several edges.

When I was hunting upland game and had an option as to which part of a field I wanted to hunt or walk, you can bet that my Black Lab, Mojo and I would take the area with some type of land or terrain change, an edge. I have found these areas will always hold more birds, deer and other species of wildlife.

So if the edge or a change in terrain or the crop holds and attracts birds, it makes sense, if you are developing some type of land for habitat to attract and hold wildlife an edge effect should be figured into the plan!

Instead of planting one solid field of grass, why not mix in a strip of legumes, a tree planting, food plot, milo, corn or beans or some other type of planting that breaks up the field.

By creating these change in the terrain, the edge, not only will wildlife have what they need when it’s warm, they’ll also have everything they need once winter sets in.

Which means, your pheasants and deer, the critters you are trying to attract and hold will not need to go to the neighbor’s land for food, water etc? They will have everything needed on your land.  Because you will have, what the critters need, and your neighbors will not shoot those birds or that buck you have been watching.  They will be on your property in the excellent habitat you created with the changes in your field, edges that wildlife will relate to and use.

What you have also created is an ideal hunting scenario, because you know the critters will be moving along the edge of these areas and by hunting those, you will become a much more successful hunter.

At the same time you will have the satisfaction knowing this was something you developed, creating not only an area where good numbers of birds hatch and live, where the deer breed and raise their young and bed, you have created an area where with the proper management excellent bird populations and trophy bucks will be found.

It is simple, the edge attracts wildlife and by developing, more edges or changes in your fields, and hunting those, your success and enjoyment will increase with every season.