Drawing them In Exciting and Effective By Gary Howey

Nothing is more exciting than using a call to draw animals or birds in for a shot; it could be deer, waterfowl, crows or turkeys. When they turn and start moving your way, your heartbeat will quicken, your hands will start to shake and you will have trouble with your breathing.

It happens to even the most well seasoned hunter, it is a rush, you are fooling some of Mother Nature’s wiliest critters and even if you do not get the shot, just having the opportunity to draw them in is exciting!

My first attempt at calling would be for deer, it was my first deer hunt as I had gotten permission to hunt deer along a creek north of town. There was an old deer stand built in a tall tree along the creek. The first time I climbed it to see if it was a good stand, I was not sure if I had enough nerve to climb that high. Once I got up there, it was a great vantage point as I could see both sides of the creek as well as the ridge to the south.

It needed a little work, but once I had the stand beefed up, it looked like it would give me an excellent shooting platform, giving me the opportunity to take my first deer.

Back then, I read everything I could about hunting and the outdoors. I would have a stack of outdoor publications piled next to my chair in the living room where I read and re-read them.
In one of the magazines, there was a column on rattling deer in Texas. The sound would imitate two bucks fighting, it looked interesting, not to difficult and something; I could do and not screw up.

One of my friends loaned me a set of antlers from a deer he had taken years ago, which I tied together with some light cord. I practiced at home, thought I sounded good and patiently waited for the season to open.

When opening day came, I was ready, had my new 243 zeroed in, plenty of warm clothes and my hunter’s orange vest and cap.

I approached the tree where the stand was located a quietly as possible, with the sun beginning to make its appearance in the eastern sky. Then I did something dumb, I slung my rifle cross my back, had my vest stuffed full of extra gloves, stocking cap and had the rattling horns hanging around my neck as I started making the long ascent to the tree stand. Several times, because I was lugging so much stuff, about lost my balance, this was when i realized I should have brought along a rope to pull my gear up after I had reached the stand. 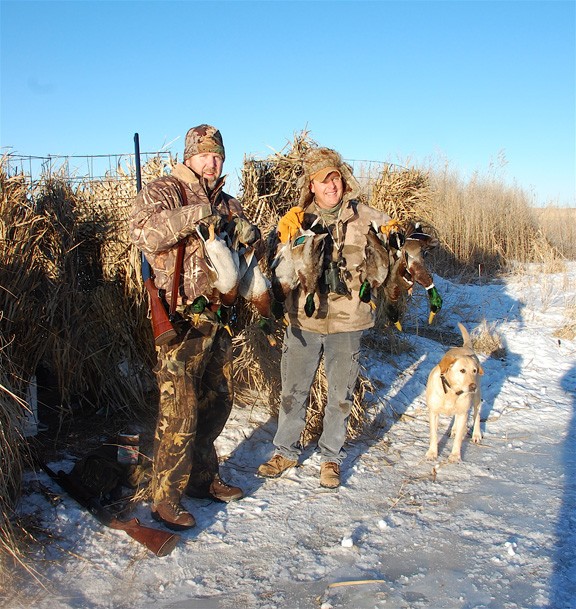 As I neared final steps leading to the stand, I spotted movement in the creek, with a good buck crossing just downstream from me. There I sat, hanging on for dear life, trying to figure out how I could get a shot and not fall to my death. I knew I was out of luck; watched s the buck disappeared into the trees along my side of the creek.

I finally made it into the stand and using my binoculars desperately searched the field the deer would have to cross to get to the next tree line. Seeing nothing, I thought I had missed my opportunity. With nothing better to do, I decided to rattle the horns together, if for no other reason the keep warm. I banged them together several times, took a break and did it again.
Then it happened, of to my left along the ridge, heading my way was the buck that had just crossed the creek. He was in no hurry, which was good as it gave me time to quit shaking and gather my thoughts.

Ever so softly, I tickled the horns together, giving the buck an idea as to where the fight was going on, yet not loud enough to give away my position. The buck kept coming drawing nearer and near with each step. At eighty yards, he made his final mistake, stepping into the open, giving me a broadside shot.

I was worried as I pulled the trigger as I still hadn’t gotten myself calmed down, the bullet impacted the buck a bit forward of where I wanted the shot to hit, he jumped and charged back into the trees.

After I quit shaking and calmed down, which gave the deer sometime time to lie down and succumb from its wounds, I made my way down the tree, where I started tracking my first deer.
It did not take me long to locate the deer as it has only ran approximately a hundred fifty yards before tipping over.

This was the first time I had called in anything and I was pumped, as it was much easier than I had thought. After that, I ordered my first deer grunt call and now I use an adjustable call that allows me to sound like fawns, does as well as bucks.

My next attempt was to call turkeys, which took me a little longer to master, as setting still on the ground for extended periods was not exactly my cup of tea. I finally got it figured out and 108 turkeys later, love attempting to convince a big Tom that what he hears is his next love.

Mastering a duck call is something I am still working on. One of my first waterfowl hunt was done with Badger Bailey and Dar Rakowsky, Crofton, NE. and later with Bill Christensen, Hartington, NE. who all could sweet talk even the wariest mallard into range.

Now days, there are DVD and videos which make it easy to learn how to make the correct sound, to sound like a mallard hen , goose, doe or love sick hen turkey, allowing you to learn their sounds quickly.

Needless to say, I am hooked, finding it much easier and exciting to call game, as when a big tom gobbles and comes strutting in or mallards and geese set their wings, making their final approach to the water, it is a sight you will never forget.

Now, when I head into the woods and the blind, I will have my calls with me, there are times. especially in the duck blind where my hunting partners have indicated they would do the calling as some of my duck calls do more to give my partners a headache than to draw in a duck.

I am still working on the duck call, but I will not miss an opportunity to call the game in as it adds a completely new dimension to my time in the woods and in the blind.

← Prev: At ice-out, crappies are the first to bite By Larry Myhre Next: 5 “MUST-HAVES” IF YOU WANT TO SEE MORE WILD TURKEYS →