This column reprinted from the Sioux City Journal.

It was going to be a warm day, but that breeze ruffling the leaves of cottonwoods along the bank of the Missouri River would make it seem a lot cooler.

Pat Carter, of Elk Point, S.D., pushed his boat out into the current of the whispering Missouri and jumped aboard. With the bow pointed upstream he put the hammer down and we were soon on our way.

We had launched at the Sloan, Iowa, boat ramp and our plan was to motor upstream a few miles and begin drift fishing our way back.

Earlier that morning we had stopped at Browns Lake to pick up our bait. After a few throws of the cast net around the dock it was apparent that we would have to launch the boat and pursue the huge schools of newly hatched shad we could see riffling the surface of the quiet water.

It took just one cast.

When Pat lifted the net into the boat it was gleaming with young-of-the-year shad, each about 2 inches long. He dumped hundreds of them onto the floor of the boat and we began filling plastic zip bags with them. We would have plenty of bait for the day.

Our hope was to land one of the big blue catfish that we know inhabit this river. There apparently are not very many of them, but they do exist.

Of the 30 teams that weighed fish at the recent Cat Attack catfish tournament, of which Pat is the director, only two blues were brought in and those by the same team. The biggest of the two weighed 30.05 pounds and took second place big fish behind a 35.50 flathead.

When Pat killed the big motor and dropped down the bow-mounted electric, we began to cut up the bait. The electric motor would keep our bow pointed upstream and slow our drift somewhat as the current moved us downstream. 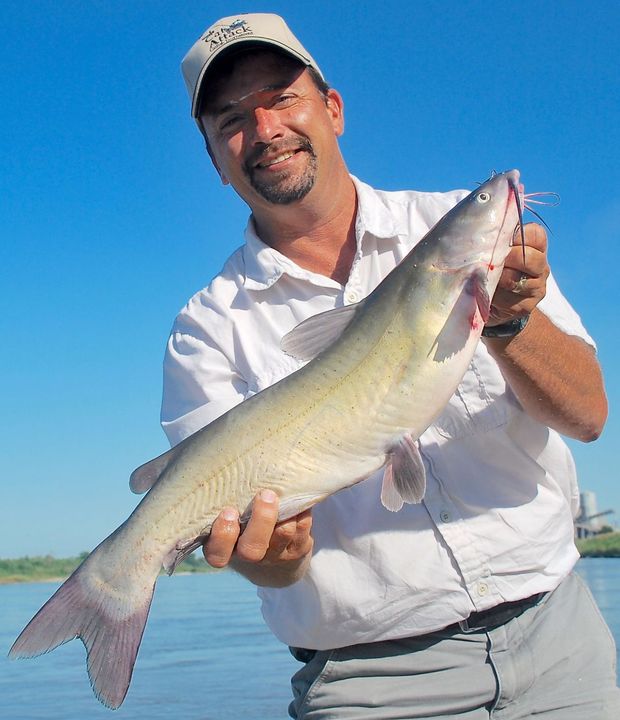 For drift fishing, we use three-way rigs, a 4-ounce sinker on a foot-long dropper and a leader of about 30 inches of 40-pound mono.

As we began bouncing our baits downstream, it wasn’t long before Pat stood up and began watching his line. Then he set the hook and the rod bent over.

I grabbed the landing net and we soon had a 6-pound channel cat in the boat. We made a quick photo, released the fish and got back to fishing.

Before long my rod bent down and I began reeling against the fish. The circle hook had done its job. The fish was hooked well in the corner of the mouth. He went back to the river, too. We would not keep any fish this day.

We landed a couple of more channels, and then Pat’s rod bent double.

I thought it was a snag for sure, but suddenly the line was alongside the boat, and the fish was going to my side. I began reeling in fast, but it was too late. The fish let go, and when Pat reeled in, my line was tangled with his.

Now that was a big fish. Surely it was one of the big blues we were after.

It was actually the second big fish Pat thought had hit his bait. A few minutes earlier another fish struck but came unbuttoned right away.

The Missouri River is home to three species of catfish. Channel cats and flatheads are the most numerous, but it seems a growing number of blues are also showing up in our area.

A 10-pound channel cat is pretty big for this section of river, but the flatheads are monsters. Flatheads in the 40- to 60-pound range are caught here every year.

Just a couple of weeks ago, an Iowa Department of Natural Resources research team shocked up a flathead that, if caught by hook and line, would be a new state record. The fish came from behind a wing dam in the Sergeant Bluff area.

When we ended our fishing about 4:30 in the afternoon, we were far below the Sloan boat ramp. All told we had put 12 channel catfish in the boat but the elusive blues avoided us.

But there’s always next time. A good day on the river catching nice-sized channel catfish is tough to beat, really.

More outdoors information can be found on Larry’s page siouxcityjournal.com/sports/recreation/outdoors/