For those of us who have counted the days until the pheasant opener, your wait is up!

Reports indicate that the pheasant numbers in Iowa, Nebraska, Minnesota and South Dakota are up, these states are really crowing about their increase in pheasant numbers.

The mild winter and decent spring, as well as some improvements in habitat have helped to bring pheasant numbers back up.

I have hunted pheasants in the upper Midwest most of my life and especially in South Dakota, as that was where I grew up. If you are looking at pheasant hunting in South Dakota, you will not need to worry, as the number of birds in the state, their state bird, the Chinese ringneck pheasant are unbelievable and there are more birds there than anywhere I have ever hunted.

Over the years, I have hunted with hundreds of hunters and was surprised how some went charging into the field with no plan and at times, “No Clue.” Then there were those, who amazed me, these hunters looked each field over, hashed things over and made a plan, before heading into the field, approaching each field differently.

Here are a few tips that I have learned over the years helping me to become a more consistent pheasant hunter. 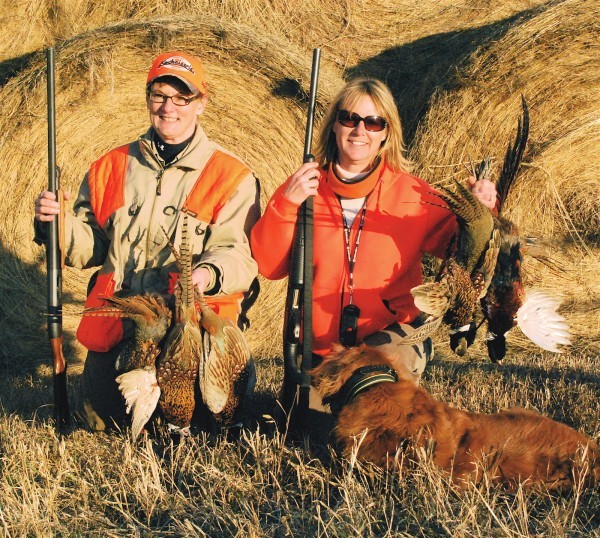 • Once you arrive at the field you plan on hunting, keep the noise to a minimum as all wild game has a very acute sense of hearing. This means, do not slam your car door and you will need to keep your dog under control.

• If you use a whistle to control your dog, do not keep blowing on it, as this will surely put the birds on alert, as the blast of a loud whistle is a foreign sound to them. If you need to use a whistle, try using a hawk call as it is a familiar sound and many times when the birds hear it, they will hunker down, allowing you to get closer before they burst from the cover.

• Let your dog do the hunting, follow him wherever he leads you, as his sense of smell is the key to locating the birds.

• In the early season, you will run into many young birds, which hold tight, allowing you to get close enough for a shot, so you will not need a heavy load, as you would during the late season. Six shot is a good load to use at this time of the year and as the season progresses you may want to go with heavier loads.

• I go with a 5 shot year round as I hunt from the opener until the end of the season and the 5 shot works throughout the year.

• Even though it’s early season, take your time hunting, as there is no need to rush.

• Stop occasionally so your dog can work the area, if you aren’t hunting with a dog, it is still a good idea to stop as this makes those birds hunkered down around you nervous, thinking they have been spotted, forcing them into the air.

• Use wingmen and blockers, as even early season birds will run ahead of the hunters. Wingmen should be 15 to 20 yards ahead of the walkers on either side and blockers will need to spread out at the end of the field you are hunting.

• Blockers need to approach the end of the field quietly, getting into position well before the walkers start moving.

• Make every effort to find downed birds. Other hunters in the group should spot for the hunter and dogs searching for the bird, guiding them into the general area the bird went down, narrowing the search area, making it easier to locate downed birds.

• Think safety first! Be sure you know where the other hunters are.

• Everyone in your hunting party should wear hunters orange, as it makes it much easier for others to see you and in many states and it is the law.

• Use the Blue Sky method and do not shoot at anything not high enough for you to see Blue Sky under the bird.

• Never shoot at a bird on the ground, as many times a hunting dog will be right behind the bird.

• Call the bird so other hunters will know if it is a hen or rooster.

Much of the success when hunting early season depends on how much un-picked corn remains in the field. If there is corn still standing in the fields, you can bet that that is the first place the birds will go once the first shot goes off.

At one time, it was an easy task to walk the corn as the rows were wide, weedy and the corn was short. Now days, rows are narrow, clean and over six foot tall. If you hunt corn during the early season and you want to get a shot, you best be either a wingman or blocker.

Those hunters pushing through the corn are just going to be drivers, driving the birds in front of them to the wingmen and blockers.

I hope that we will all have a successful and safe pheasant-hunting season, see you in the field!