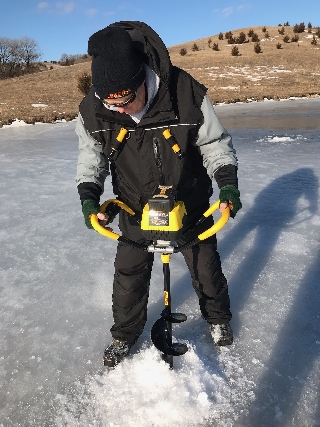 First Ice can be very productive, and very dangerous, before venturing out, make sure you have good clear thick Ice. The author took this and several other crappies during first ice, with 4″ of good ice. (Outdoorsmen Productions photo)

Every year around the first of December and in some years earlier, people start calling the office asking about ice fishing and where they’re biting

I do my best to try and keep on ice fishing and ice safety, especially in The Glacial Lakes and Prairies of northeastern South Dakota

With the cold temperatures that have been coming and going, you’d think that there would be some pretty good ice being made somewhere and building on bodies of water that aren’t snow covered, but on those ponds and lakes that have snow piled on them, you need to be especially cautious.

Snow covering the unfrozen ground does the same thing on the ice; it acts as an insulator, not allowing the cold temperatures to get down and freeze the ground or the water.

The ice may look strong or be solid along the shoreline where the snow has blown clear, when in fact there are probably areas on the lake that have very little ice because of the snow that covers it.

I had an experience with snow piling up against the cattails on slough years ago west of my hometown, Watertown, South Dakota, we weren’t ice fishing, but it was a lesson that I won’t forget.

We were pheasant hunting and our group had just come out of an unpicked cornfield that ran up against a slough.

In the fresh snow we could see pheasant track heading out into the slough that we followed, as I came to snow that was packed against the cattails, I attempted to step over the snow on the thick ice.

I’m long legged, yet couldn’t make it all the way to the clear ice and stepped on the edge of the cattails.

Putting pressure on my lead foot on the snow, it along with the ice gave way and I was belly button deep in subzero temperature slough water.

Thank God, I had other folks with me or I may have been there until spring.

I may not be a rocket scientist, but falling through the ice because of snow on it, once was enough to let me know to “Never” do it again.

Before heading out on any body of water to ice fish, we all need to be considering the potential dangers we might face.

Ice color is a good indicator of the ice strength; anyone heading out onto any ice covered body of water should look for clear blue ice, as it’s the strongest as it’s created by a sustained freeze.

Black, gray or honeycombed is the most dangerous, as it has repeatedly frozen and thawed, with discolored or dark spots indicating thin ice, open water, or the location of moving water, such as a spring, all of which are dangerous.

I mentioned earlier, that snow cover insulates the ice, inhibiting solid ice formation and making it almost impossible to judge the diameter of the ice under the snow.

Other areas that may also have thin or unsafe ice, is around icehouses, fishing piers and bridges as these  absorb the sun’s heat, increasing the melting around their edges, creating thin ice and at times open water.

Dead , dark vegetation also has the ability to absorb heat from the sun, with rotting vegetation creating its own heat, with the water around it may not be too thick.

Where fish, muskrats, beaver and other animals swim under the ice can also weaken it.  This is especially true in shallow sloughs, lakes and rivers.

Moving water weakens ice approximately 15% and wind creates a pumping action that forces water through the breaks and cracks enlarging them and making them larger over a short period of time.

When crossing ice on foot and you’re not sure of the thickness of the ice, slide your feet instead of stepping, as this helps to distribute your weight more evenly.

It’s also a good idea to carry an ice chisel, such as the Jiffy Mille Lacs Ice Chisel to check the thickness of the ice as you work your way across the ice.

Another good idea is to carry along a cord attached to large sharpened nails or a screwdriver.  This can be worn on around the neck, used to pull you back on the ice if you should happen to fall through.

Once out of the water onto the ice, roll away from the hole instead of standing up, helping you get to thicker safe ice.

A general rule of thumb when it comes to just how much ice it takes to support you and your equipment on clear-blue ice formed under ideal conditions see below.

If there is less than two inches or less of ice, it’s best to Keep Off, with four inches supporting a group of people walking single file.

You should have Five and a Half to Six inches to support a snowmobile or ATV, with Eight to Twelve inches good ice needed to support an automobile.

If you plan on driving on the ice with a pickup or truck you” need Twelve to Fifteen inches of good ice.

Earlier in the winter, first ice, I like to double the above thicknesses just to be on the safe side.

Early Ice fishing can be very productive and with the fishing very productive, but before wandering out onto the ice to early, can lead to a disaster, so don’t rush to get on the ice.

Cold weather and ice will be around for way too long and no fish is worth putting your life in danger!