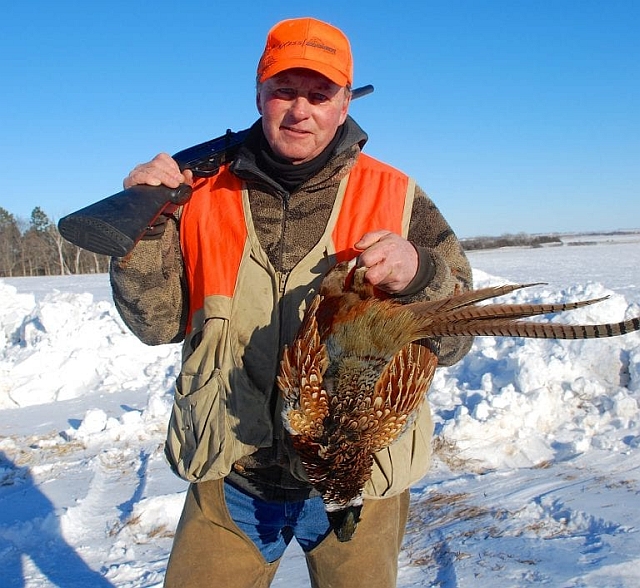 It may be cold and windy, but hunters like Chuck Stone, from Watertown South Dakota know that some of the best pheasant hunting of the year will happen during the late season when the birds are in large flocks. (Gary Howey Photo)

As we head into Christmas and the New Years, the pheasant hunting is going to be different from what it was during the early season. Most of those young, foolish roosters have been bagged.

With the colder weather you’ll find that they’re now in larger flocks and that the remaining birds have been educated.

These larger flocks have more eyes and ears to detect danger so it means that slightest noise will send the entire flock winging its way the off into the horizon before the hunters get close to them.

Late season is when you’ll need a well-trained dog, not one you have to yell at every couple of minutes to keep him close.  You’ll also want to avoid the guy who continually blows on their dang dog whistle trying to control their dog.

These birds can hear as well as the dog and the first time they hear someone yell or hear a whistle blast, they’re on the move.

After hunting with a hunter who was always on his whistle continually, I did a little researching as my first dog had a tendency to work too far ahead.

The sounds that other wildlife makes are well known to the birds and because hawks are thick in the upper Midwest, pheasants know when they hear a hawk call; they best not go airborne as it would mean instantaneous death.

I trained my last lab using a hawk whistle, when he heard it; he stopped looked back and followed my hand signals. This meant that I didn’t need to yell at him to get his attention and the pheasants that were in the area would think that a hawk was nearby and stay put.

Even if these late season don’t flush way ahead of you, some will more likely run instead of hiding hoping that you’ll walk past them.   They’ll move out at the first indication of danger and take wing when they are frightened or run out of cover, which is usually 100 plus yards from the hunter.

Late season birds are no longer scattered here and there throughout the habitat, as after the first snow all of the birds will head for the heavy cover for the rest of the winter.

They like to be close to their food source and the heavy cover that gives them protection from the heavy snows and cold winds of winter.

If they have a food source close to where they roost, it saves them energy, not having to travel longer distances to get to their food source.

Shelter-belts, near cattle feedlots, in sloughs and in farmstead shelterbelts, areas that offer the birds some protection and food is where you’ll have most of your luck this time of the year.

There are a few ways to outsmart the late season cacklers!  You’ll need to hunt quietly, keep the commotion to a minimum.  Walk slowly and if you’re hunting with a dog, give the dog time to “Root” out the birds that are holding tight.

Don’t make the late season mistakes that some hunters do and that’s to move through an area too quickly!

You’ll want to slow down as the birds are tucked into their snug roosts and not anxious to get out into the cold windy weather, so they may just set their, hunker down and let you walk past them.

Take your time, follow your dogs, allowing them to locate and the work the birds.

If you’re hunting without a dog, don’t walk straight through the field; walk from side to side, zig-zagging your way through it.  This way you’ll cover more ground and apt to come across a running bird that might be trying to get around you.

From time to time you’ll want to pause for a short period, this makes those birds that might have hunkered down in the thick cover extremely nervous and by stopping, they might flush thinking they’ve been spotted

Hunting the late season, you may want to go with a tighter choke in your shotgun as many of the shots you’ll be taking will be long ones and a tighter pattern can be a real plus.

I also go with heavier shot as the season winds down. As the heavier 4 or 5 shot gives me a little more knock down power at longer ranges.

Late season hunting takes place in December or January, depending on the state you’re hunting and the weather at this time of year can be unpredictable.

On one weekend, it may be sunny, windy and 40 degrees, but it can change quickly this time of the year, so if you’re traveling away from home to hunt late season, you’ll want to have clothes for both warm and cold weather conditions.

One of the nicest things about hunting late season is that there’re fewer hunters, finding a place to hunt isn’t as hard as it would be during the first part of the season.

From Our house to yours, the Howey family wishes you all a very merry CHRISTMAS and a Happy and prosperous New Year!