It’s November when in a normal year with cold weather when people those die hard ice anglers are looking for a place to ice fish.

Not this year, as the weather we’ve in early November was so unseasonably warm, we haven’t had to field many questions about ice fishing.

With the warm weather, not too many folks are thinking about ice fishing as it may be awhile before we get any good-safe ice in South Dakota, Nebraska and Iowa.

Before the colder temperatures arrive and ice starts to form, it’s not a bad idea to refresh our memories when it comes to ice safety.

It’s just common sense to be in a hurry to get out on ponds and smaller lakes or before heading out on any body of water to ice fish, as there is always a danger when it comes to ice.

Ice color is one of the best ways to see if ice is strong enough to hold you.  Look for clear blue ice, which is the strongest because it’s created by a sustained freeze.

Black, gray or honeycombed ice is the worst and unsafe because of repeated freezing and thawing. Discolored or dark spots are a good indicator of open water, thin ice, or possibly a spring, all of which are dangerous.

If there’s snow on the ice, it acts as an insulator, not allowing solid ice formation and making it almost impossible to judge its thickness.

Snow piling on the unfrozen ground does the same thing to the ice, not allowing the cold temperatures to get down and freeze the ground or the water.

Sure, ice may look solid, especially along the shoreline where the snow has blown clear, when in fact there’re probably areas on the lake having very little ice because of the snow covering it.

Anything on the ice, icehouses, fishing piers and bridges absorb the sun’s heat and increase melting.  Vegetation will also absorb heat from the sun, and rotting vegetation can create its own heat as can fish, muskrats, beaver and other animals swimming under the ice can weaken it.  This is especially true in shallow lakes and rivers.

Any moving water weakens ice approximately 15% and wind creates pumping action forces water through the breaks and cracks enlarging them and making them bigger. Be especially careful if there is a windmill or other type of aerator on the pond as these have outlet pipes under the ice creating moving water, which will weaken the ice.

If your crossing ice on foot and you’re not sure of the thickness of the ice, it’s safer to slide your feet instead of stepping, as this helps distribute your weight more evenly. 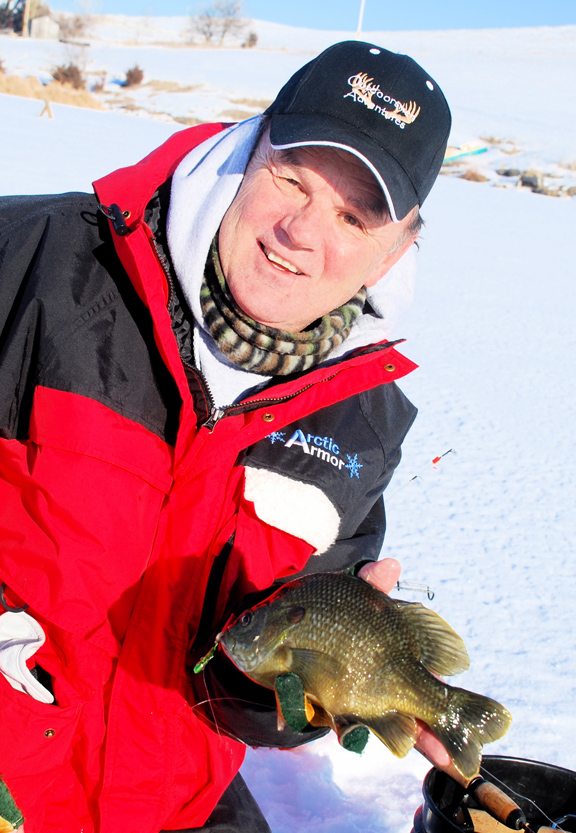 Early ice can be some of the best fishing, author with a nice bluegill taken during early ice last season/ (Larry Myhre Photo)

It’s also not a bad idea to carry an ice chisel to check the thickness of the ice as you work your way across the ice.

Another good idea is to carry along some sort of rescue equipment in case you break through the ice. Frabill’s makes ice picks worn on the outside of your clothing, not tucked away in a pocket and hard to get at. In between the two ice picks is 72 inches of stretchable cord connecting the two retractable, hand-held spikes. A durable guard, activated only with downward pressure, which covers the spikes, and used to pull you back on the ice if you should happen to go through.

If you do fall through the ice and once you’re back on the ice, roll away from the hole instead of standing up, this helps you to get to thicker safe ice.

Below are a few general rules of thumb as to how much ice it takes to support you and your equipment on clear-blue ice formed under ideal conditions.

(Earlier in the winter, it is a good idea to double the thickness to be safe).

If someone falls through the ice, remember to Reach Throw, Go.

Early Ice fishing can be very productive and a lot of fun, but heading out onto the ice early, before good ice forms can lead to a disaster, so do not rush to get on the ice.