Early walleye fishing success is about timing By Larry Myhre

For those chomping at the bit to go walleye fishing, your best bet is fishing along the Missouri River.

Pre-spawn walleyes will be staging below the dams all up and down the river. And anglers will be there in big numbers to take advantage of the bite.

For natural lakes, it is still a bit early. Iowa’s best walleye lakes, West Okoboji, East Okoboji and Big Spirit, are closed to walleye fishing at this time. The season doesn’t open until May 2.

In lakes like Storm Lake anglers are working the shallow gravel and sand points and flats looking for the male walleyes that move into those areas in a pre-spawn run.

While you can be effective fishing from a boat on a lake like Storm, or many of the northeast glacial lakes of South Dakota, wading fishermen often have an edge. That’s especially true of the locals who know their lakes like the back of their hand. Generally small jigs from 1/16th to 1/8th work best at this time. Try fishing a plain leadhead tipped with a small fathead minnow. You might be surprised.

But what about opening day on the Okobojis?

Chances are the fishing will be tough. I used to open the season there every year for a number of years, fishing in the Fort Dodge Messenger’s Walleye Tournament. Headed up by my late friend Bob Brown, the Messenger’s sports editor, the tournament was more of a social gathering than anything else.

The only decent walleyes caught were taken by anglers fishing Big Spirit Lake from the midnight opener into the early morning hours. I have never cared much for night fishing, so I spent opening day on East Lake, Minnewasta and Upper Gar.

I’d chase the small males still resting on the spawning areas or concentrated by current. I fished 1/16th ounce jigs as well as split shot rigs and minnows. And I usually caught enough to win the media division of the event.

I’d rate mid-May to late May as one of the best times of the year to catch walleyes in the Iowa Great Lakes region. It always seemed that two weeks after the opener walleye limits of nice fish became common. 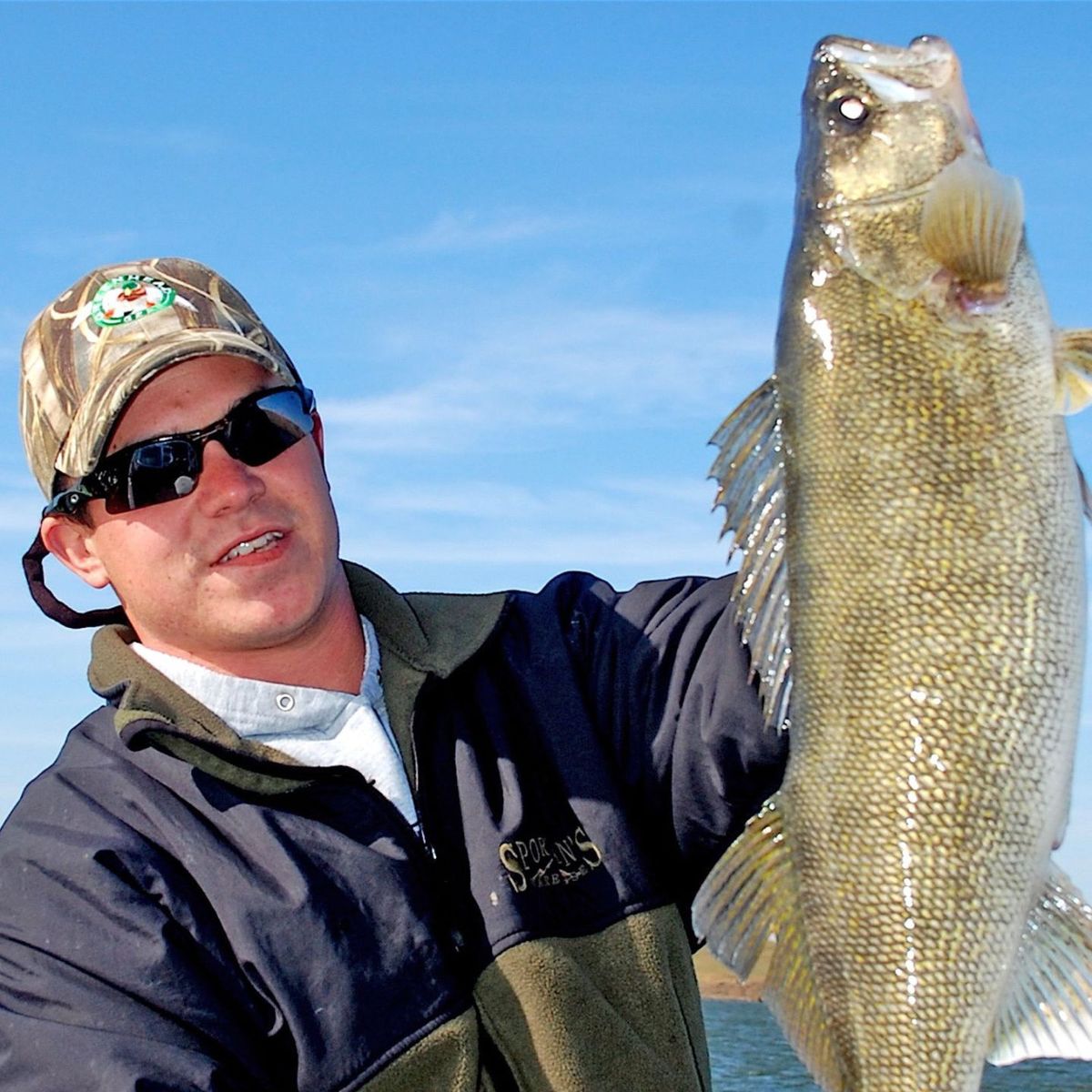 In the South Dakota Glacial Lakes region, this spring hot fishing will occur in late May and early June. In the mid- to northern lakes of Minnesota the best fishing will be in June.

The walleye spawn in the Iowa Great Lakes region hits its peak usually somewhere around the third week of April. The little males will be arriving on spawning area shortly after ice-out. The females will stage in nearby deeper water. By far, the majority of spawning takes place at night. The females will move in, disperse their eggs and move back to their deep water holding areas. It takes the big females about two weeks to recover from the rigors of spawning and to begin actively feeding once again. The males will stay on the spawning beds and not move off until the water begins to warm, weed growth begins and baitfish become active.

Once the weedlines begin to form, the walleyes will move in. The best presentation will probably be a Lindy Rig and a minnow. I prefer shiners about 3 to 4 inches long at this time if you can find them.

They are difficult to keep alive, but cool water and plenty of aeration will help. Also, don’t crowd them. Use two or three baitfish containers instead of just one.

I often like to hop from lake to lake at this time in both northeast South Dakota and in Minnesota.

Regardless, all boaters must keep in mind the special regulations throughout our four-state area to control the spread of invasive species.

These threats of our resources are real and spreading fast.

Among the vegetative species are brittle naiad and Eurasian water milfoil.

Zebra mussels, another devastating invasive, have been identified in the Okoboki/Big Spirit chain of lakes as well as Lewis and Clark Lake in South Dakota.

I strongly advise anyone fishing or boating in any state to take some time and study the invasive species laws. Many of these laws are relatively new.

In Iowa, as well as most other states, you must clean visible aquatic plants, zebra mussels, and other prohibited invasive species off watercraft, trailers, and equipment before leaving any water access.  Water must be drained from your boat, livewell, bilge, and portable bait containers before leaving any water access. Drain plugs must be removed at the water access and remain open while transporting boats.  Any unwanted bait must be trashed. It is illegal to release live bait in a water body. If you want to keep your live bait, you must dump the water and replace with tap or bottled water.

Bighead carp and silver carp are rampant along the Missouri River and its tributaries all the way up to Gavins Point Dam. Early last fall I ran up the mouth of the Big Sioux to the Interstate bridge. My depth finder showed a consistent depth of eight feet. The silver carp were so thick the depth finder could not read through them. Occasionally one of them would jump, but I think the majority were too deep to react.

Early walleye fishing can be some of the best of the year, but timing is important on every body of water. Get that figured out and you can have excellent walleye fishing from late winter through June. If there is a secret to fishing success, that might just be it. Fish the peaks.