Walleyes/Sauger Throughout the Spawn By Gary Howey

This week’s column, will deal with one of the upper Midwest most popular gamefish, the walleye and their smaller cousin found in the Missouri River, the sauger.

In the spring, walleye and sauger will be located near where they spawn. The males made their migration up river during the late fall to the dams, where are congregated in the deeper slack water.

During the pre-spawn on a reservoir or lake, look for them in the deeper water that lies adjacent to gravel and rocky areas.

Fish in both the lakes and rivers will locate very close to the areas that warm up the quickest, where they will spawn.

In most bodies of water, these warmer water will be located on the north or west shorelines.  These areas receive more sunshine during this time of year and because of this, they’ll warm up quickly.  Look for them in the shallow water areas near the rock rip rap shoreline as these areas as the rocks will retain the heat longer.

The males are always the first to arrive and these large schools of smaller aggressive fish are prowling the area waiting for the larger females to arrive. They would have moved up earlier, when the water temperatures were just a few degrees above freezing.

The females will come into the area as the water temperatures near 40 degrees. Since there are not as many females located in the area and are not as aggressive as the males, you are going to catch more of those smaller males than the larger females.

Females don’t have to move around as much as the males, so they’re using less energy, needing to feed less often. The females will be located deep throughout the pre-spawn, occasionally moving shallow to feed and then moving back into the deeper holes or other slack water areas to rest.

You’ll find them resting behind sandbars and islands, out of the main current.  A week or two prior to the spawn, when water temperatures warm, they’ll begin to move shallower and start to feed more aggressively, preparing for the spawn.

During the pre-spawn, both male and female will roam around the shallows during low light periods, moving back deep as the sun appears.

In most of the areas we fish, spawning will occur when the water temperatures reach 40 to 48 degrees, when the females move shallow, to six foot of water or less to spawn.

These spawning areas are located where the gravel or a rock bottom is about the size of your fist.

On my home lake, Lewis and Clark, the water temperatures are fluctuating a lot, up to 41 degrees, then, because of the snow and cold weather back down to 38. 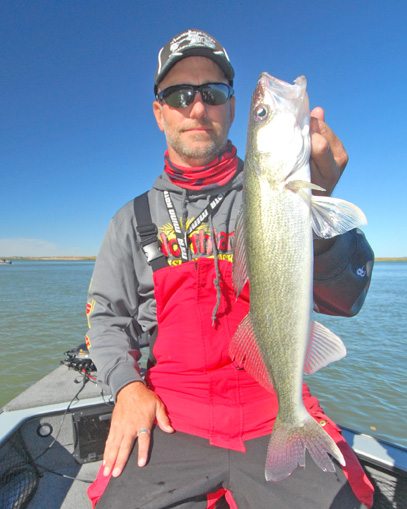 Just like other animals in the wild that don’t breed at the same time, all walleyes/sauger won’t be spawning at the same time, as on some parts of the river or a lake, the spawn may have already begun while in other bodies of water it hasn’t happened yet.

Walleyes are random spawners, where they deposit their eggs into the rock and gravel and from that point on, the eggs and later on the fry are on their own.

In many areas like our Missouri River, an untimely drop in water levels can mean the entire years spawn could be left high and dry and wiped out.

On a lake and reservoirs, the spawning beds are located in areas exposed to the wind, as walleye eggs require aeration in order to hatch. In the Missouri River, wind isn’t an important factor as the continual current flow aerates the eggs.

Catching walleye and sauger during the pre and post spawn period requires patience and a lighter and smaller tackle than you would use once water temperatures warm up.

Light jigs (1/4 ounce or smaller) tipped with small minnows, attached to a light limp line work well when jigged vertically or drug slowly along the bottom.

Since the fish are lethargic this time of year, when get a bite; it is not a bad idea to drop back on your rod, or release line, allowing the fish to inhale your bait before setting the hook.

Another piece of tackle you might want to use in the spring is a stinger hook.  Stinger hooks are a small treble hook and a short piece of mono or leader material attached behind the jig.  The stinger hook allows you to have an additional hook in the tail of the minnow.

Stingers are important when fishing during the pre and post spawn, as walleye and especially sauger are notorious for grabbing the tail of the bait, holding on, just short of the hook.  The stinger hook catches many of these tail-biting fish as it hangs down behind the jig.

A lighter, limper line allows the bait to descend quicker, allows your bait (jig & minnow) to appear more lifelike and reduces the coils that would be present with heaver line, making it easier to feel the fish picking up your bait and to set the hook.

Since you will probably, fishing some of the cleanest water conditions you’ll fish all year and because fish are cold blooded, they’ll be moving super slow in cold-water conditions and having more time to look at your bait.  You’ll want to slow down your presentation and at times, many strikes will happen when your baits aren’t moving at all.

These rigs are basic, consists of a small hook (or double hooks for warm water fishing) attached to a monofilament leader.  The leader is then hooked into a swivel with a sliding sinker above the swivel.

With these rigs, you can feed the fish line when you feel a pick up, since the fish feels very little resistance; they are less likely to spit the bait.

After a couple of seconds, reel up the slack and if you still feel the extra weight on the end of the line, set the hook.

This is the time of the year, when the simpler the better is best!