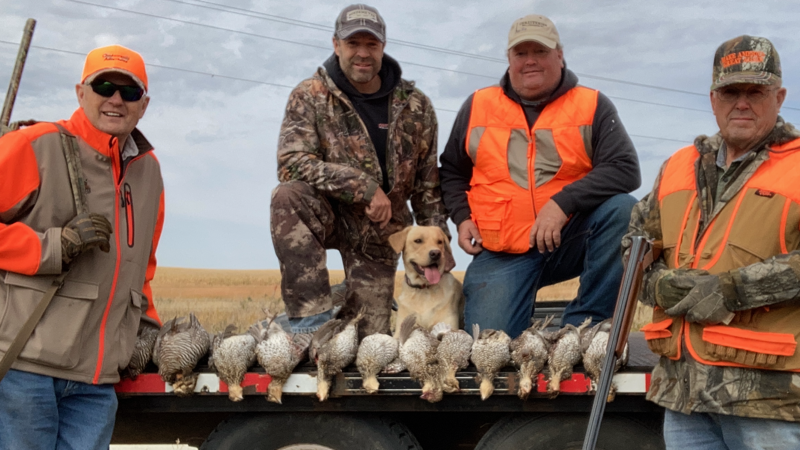 It was 6:00 am as Cody, Carly, Bill Christensen and I, along with Cody’s Lab “Trump” headed from Hartington, Nebraska west towards the Springview, Nebraska area to hunt sharp-tail grouse and prairie chickens.

The conversation on the way, dealt with the grouse hunt, our upcoming deer hunt and of course, well drilling and irrigation, as when father Bill was ready to retire, the Christensen boys, brother Casey and their families took over Christensen Well and Irrigation.

Grouse hunting can be an exciting hunt, but you best be prepared to walk several miles as the birds are generally in the prairie grassland or along the grass corners of irrigated cropland and once you’ve busted a covey of grouse, it’s not unusual for them to glide a long way before setting back down.

They’re more of a western bird, with their numbers increasing as you get into the short grass prairie regions of the central to western states.

If you’re going after grouse in South Dakota, the grasslands of central and western part of the state, is where you’ll find both prairie chickens and sharptail grouse.

You’ll find a few coveys of grouse east of the Missouri river, but the best hunting is farther west, with the birds, not as abundant as those found in the counties of the west-central part of the state.

Hunters using dogs, will have the best opportunity to get into grouse that will hold tight, especially on those hotter days with a light wind, allowing the hunter to get close enough for a shot.

Even though they’re birds of the prairie, when it is a warm sunny day, you’ll find the birds seeking the shade of the cedar windbreaks, where you can hunt then just like you would hunt pheasants.

Grouse and their close relative, the prairie chickens are strutters and dancers where each spring they return to the lek, their dancing grounds as they do their best to entice the female to accept them.

They lay from nine to a dozen eggs with an incubation period of twenty-one to twenty-three days and when they hatch, where they’re stay with the hen, during their nesting period that’s seven to ten days, the chicks are covered downy feathers, able to follow their mother and feed themselves.

Both the grouse and prairie chickens are strong fliers and it’s not uncommon for them to fly long distance, several miles, both flying and gliding to get away from danger or to a favored food source.

While hunting in the Ft. Pierre National Grasslands, south of Pierre, South Dakota, one of the areas with excellent grouse populations, it’s wasn’t unusual to come across hunters from numerous states including Minnesota and Iowa who were hunting grouse during the late season with their hunting dogs during the morning and then pursuing pheasants during the afternoon.

In South Dakota and Nebraska, you’ll find grouse in their native habitat, the prairie grasslands three-fourths of the year, but as winter arrives, they’ll travel great distances, moving east from the prairie short grass habitat to areas with better, denser winter cover.

As in South Dakota, grouse hunters in Nebraska will find both the greater prairie chicken and the sharptailed grouse, with the prairie chickens found from the Sandhills up into the northeastern part of the state as well as south into the south-central and south western Nebraska.

In the Cornhusker state, grouse are found in the grasslands from the Sandhills to the panhandle, where you could run into both the prairie chicken and the sharptail grouse.

As our crew made our way west towards Springview, we drove out of Cedar County, into Knox, then Boyd and into Keya Paha County, and  as the sun appeared, as a brilliant orange ball in the eastern sky behind us, it was a good sign, indicating that this would be a day for me to remember as it was my first upland game bird hunt of the year and my first grouse hunt in over ten years.

As we slowed down, coming off the blacktop, making the turn onto the gravel road leading to the fields we planned on hunting, three grouse greeted us, not far off the highway in a harvested soybean field, along with one setting the powerlines, as I felt that it was a good indicator there had been an excellent grouse hatch in this area.

We’d hunt the grass corners of the irrigated fields, which gave the grouse areas  to rest and feed on rose hips that were scattered throughout the grass, as well as hunting along the edge of the unharvested corn ground where the birds were feeding and then moving into the grass to rest.

Cody and Carly would be on our wing, along the unharvested corn and the grass, while Bill and I worked the grass along the corner below them.

Bill and I made contact with our first grouse, coming out of the grass onto a harvested soybean field where several grouse were feeding out in the open.

Looked to be a no brainer, figuring that these may be young bird as only untested grouse would be in the open like that and if we were lucky, we may get close enough to them for a shot.

Making our way slowly through the grass into the field, we hunkered down hoping these “not so intelligent” birds would let us get within shotgun range.

Wrong, they held until we were just about close enough for a shot, then took wing, pumping and gliding off to the east into another field.

Returning to hunting the grass, just below Cody and Carly,  several shotgun blasts were heard with three grouse going down in front of the brothers, with “Trump” right on top of the downed birds, making some excellent retrieves.

There were plenty of grouse, which is both a blessing and burden, as when hunting singles, you have a very good chance of getting them to hold tight, but when there’s a group of them, they always seem to have a scout or lookout, with their head above the grass, keeping an eye out for trouble.

We’d spook up a few birds on every corner we hunted and in one spot there was a flock that flushed way out in front of us, that we estimated to be around thirty birds.

Approaching the end of the corner, a bird, chuckled, laughing at us at us, making its kuk-kuk-kuk-kuk call as it burst from of the grass,  as it rose, giving its position away as both Bill and I brought our twelve gauges up, firing in unison, bringing the bird down, helping to reach our limits.

As the morning progressed, we kept getting into birds, both prairie chicken, with their yellow legs and the grouse which had feathered legs.

Cody and Carly who had “Trump” with them, seemed to be at the right place and time, as they had numerous flushes and continued adding to our daily bag limit.

We worked back and forth, making our way through each corner of several different irrigated fields, with birds, some holding tight, while others burst from the cover well out of range, but in each corner, there were always plenty of them.

Reaching our twelve-bird limit, we worked our way back to the vehicle where we took an opportunity for a few quick photos.

Of the twelve birds we’d bagged, one was a mature prairie chicken, another a mature grouse, and the ten remaining birds all young of the year grouse.

It was a great hunt, as we spent time together with some friends, enjoyed some excellent hunting and because of the numerous young birds we took and saw, it was an indicator that the 2021 season may be as good as or perhaps even better than this 2020 hunt.

Next fall, as the temperatures cool when the leaves erupt into their vivid fall colors, it’s a safe bet that we’ll be back, enjoying some of the best grouse hunting around.

Gary Howey is an award-winning writer, producer, and broadcaster and inducted into the “National Freshwater Fishing Hall of Fame” in 2017. He developed and was the Producer- Host of the Outdoorsmen Adventures television series for 23 years and is the Host of the award-winning Outdoor Adventures radio show. If you’re looking for more outdoor information, check out garyhoweysoutdoors.com, and outdoorsmenadventures.com, with more information on these pages, Gary Howey’s Facebook page, Outdoor Adventure radio and Team Outdoorsmen Productions Facebook.