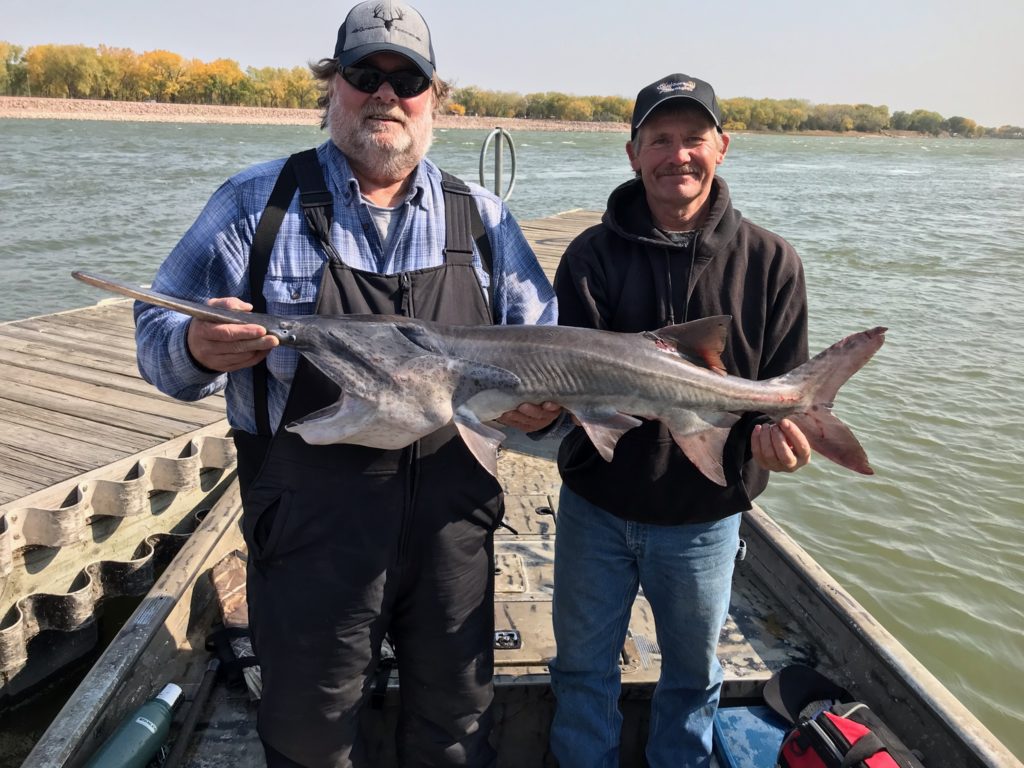 It was October first which was the first day of the 2020 paddlefish snagging season, with several dozen boats clustered up below the Gavin’s Point Dam, with both the Nebraska and South Dakota sides of the river covered with snaggers on the shore.

Unfortunately for me, this year, I hadn’t drawn a tag, as I was to become an observer and not a snagger.

Even though there’s a good chance that I won’t get a tag after having one last season, I have applied each year in order to acquire preference point.

When I first moved to Nebraska in the seventies, requirements were much more lenient as at that times all you needed in order to snag your three fish a day limit was a general license, with the season running several months.

Snaggers could use two large hooks and any paddlefish that were caught had to be kept, there was no slot limit, and you couldn’t release the smaller fish.

Now, in order to get a tag, anglers need to apply in July for the October snagging tag, with the drawing done using preference points.

If you were lucky enough to draw a tag, you also had to have a general fishing license from either South Dakota or Nebraska, allowed only one hook with its gap between the point of the hook and the shank may not exceed one half inch with a limit of one fish below or above the slot limit.

Slot fish, those that measured 35” to 45” between the fork of the tail to the front of the eye had to be released.

My brother AJ, Watertown, S.D had drawn a permit, Team Outdoorsmen Adventures member and Wynot Area Guide Service, guide Marlyn Wiebelhaus had been super busy taking out clients, but had made room on October 8th for AJ.

They hit the water about 9:00, joining the eight other boats snagging below the gates of Gavin’s Point Dam, near Yankton, South Dakota.

I was unable to join them at that time, as I had a dental appointment in Sioux City, when I finished up in Sioux City, I called to see how things were going and to let them know about what time I’d be there.

AJ had caught a few fish before I arrived, but they were all slot fish those that had to be released.

As I arrived, Marlin and AJ were waiting for me at the dock on the Nebraska side of the river.

Motoring toward the dam, we talked about their morning fishing, the fish AJ hooked and those that were lost.

We would be trolling with AJ setting up front, pulling hard to yank the four-ounce weight up off the bottom in order to hooking the fish that were holding in the river below the gates.

Once he felt the additional weight of a snagged fish, he need to rear back hard and reel quickly to keep the hook in the fish and get them coming towards the boat.

For some reason, I know it’s hard to believe, that an angler who’s continually yanking, working the rod, bringing a four-ounce weight and a two aught treble hook off the bottom, that once a fish is hooked and if fish isn’t hooked deep, the paddlefish will come unbuttoned, getting away.

It seems that the hook makes contact with the fish, as the angler is about half way through his pull, giving the angler very little room to keep pressure on the fish while pulling hard on the rod and bringing in line as quickly as possible, in order keep the line tight and the hook in the fish.

Shortly after we started trolling back and forth across the spillway, AJ connected with a fish, but was unable to bring it to the boat.

Looking around, he wasn’t the only one to hook a paddlefish and loose it before they had them in the boat.

Others were in the process of measuring and releasing paddlefish back into the waters below Gavin’s Point Dam.

At times, when I was snagging, it was easy to become disgusted as you might hook and release several fish before getting one that wasn’t in the slot, and if you hooked one under the slot, you had to make the decision if you wanted to “throw the dice” to release the fish and try for a larger one.

The first couple of fish AJ connected with were sixty-five, forty-one- and thirty-six-inch fish, all slot fish, and we continued on making the

Marlyn, brought the boat around with little brother hooking two more fish, unfortunately, they too were in the slot, a thirty-eight and a quarter and a thirty-seven-inch fish.

Snagging is work, as you’re continually pulling hard on the rod bringing the hook and weight up off the bottom, then letting the weight return to the bottom and repeating this process over and over again until you connect with the fish.

After several passes below the gates, AJ reared back, connecting with another paddlefish and as he reeled hard keeping tension on the line, it surfaced, it looked to be another slot fish.

Marlyn brought the fish into the boat, it measured thirty-eight and a quarter inches, another slot fish needing to be released.

Coming past the wall, making the turn, Marlyn straightened out the boat as AJ dropped his line down and began pulling on the rod, over and over again.

It wasn’t long before AJ set the hook on another fish, reeling quickly, he brought the fish towards the boat and as it surfaced, it looked like this one would be close to just below the thirty-five-inch slot.

The tale of the tape, would let us know if it was another slot fish or a keeper, and after checking the fish several times, in order to verify the size, it came to thirty-four and a half inches with AJ indicating that the fish would be good enough for it to be a keeper.

Marlyn attached the tag to the fish’s dorsal fin and we headed back to the dock, for a few photos, loaded up and headed for the cleaning station.

Marlyn made quick work, filleting the fish and removing the red meat, paddlefish have a lot of the red meat, their lateral line that varies from one fish to another and it needs to be cut out as if it isn’t, it’s an oily nasty tasting part of the spoonbill.

For AJ, it was the end of the 2020 season and he headed north back to Watertown, with Marlyn just beginning his season as he still had several guiding jobs before the end of October.

As I previously mentioned, snagging is a lot of work, but it’s well worth it when you fry up your catch as paddlefish is a firm white meat that some say taste somewhat like lobster.

In July of next year, I and hundreds of other anglers will apply for the 2021 paddlefish tags, crossing our fingers and hoping that after the drawing, we’ll have the opportunity to be on the water in pursuit of the ancient paddlefish.

Gary Howey, Hartington, Neb. is a former tournament angler, fishing & hunting guide, an award- winning writer, producer, and broadcaster and inducted into the “National Freshwater Fishing Hall of Fame” in 2017. He developed and was the Producer- Host of the Outdoorsmen Adventures television series for 23 years and is the Host of the award-winning Outdoor Adventures radio show. If you’re looking for more outdoor information, check out garyhoweysoutdoors.com, outdoorsmenadventures.com, with more information on these pages, Gary Howey’s Facebook page, Outdoor Adventure radio and Team Outdoorsmen Productions Facebook page. The Outdoor Adventures television show is available on the MIDCO Sports Network, and News Channel Nebraska.