When I was a guide and tournament angler, I needed to use everything I could to help me catch fish when fishing was tough.

There were numerous things affecting the bite, shutting the bite down or making it extremely hard to get a bite.

Some of these things were cold fronts, heavy winds, no wind, cold-water temperatures, angler pressure and bright sunny days with high daily temperatures.

In order to allow me to be one-step ahead of the competition, I was always looking for the thing that could give me the edge over other anglers when it came to catching fish.

Before heading for the river or lake, there was always one thing I made sure to check out and that was to look in the local newspaper to see what the water levels were and discharges coming into the the body of water I was fishing.

When a release was scheduled, especially a major release, I wanted to be on the water.

It sure bet when a release was scheduled or a change of water coming down the river, baring any natural disaster, the fishing would start to pick up and the next week or so could be some of the best fishing of the season.

The heavier the release the better the fishing, but even the smallest change in the discharge could trigger the fish.

I wish I had figured this out years before as it would have saved me a lot of time and made many of my trips much more successful.

You do not need to be a NASA scientist to figure it out as has to do with common sense, one thing that others and I sometime did not use enough.

Water releases can and will trigger fish, especially below a dam or spillway.

Look at the overall picture and you will see why fishing would pick up below these areas.

First, you have a huge volume of deep water held back behind the dam or spillway and that deep water is holding and hiding fish of all sizes and species as well as other aquatic life.

When the gates opened up, there are thousand of gallons of water drawn forcibly through the turbines or gates, bringing with it, the fish and other aquatic life that were above the dam, flushing them downstream.

The influx of water through the turbines and through the gates brings the gamefish, baitfish and other aquatic life from the lake into the river below, pushing heavy current downstream.

With the water release, it is the ringing of the dinner bell to those fish living downstream and to those carried with the water from the lake, as they will quickly move up, taking advantage of the injured and wounded critters coming through the dam.

The bite will not be quite as good when the influx is through the turbines, as it will when the gates are open. 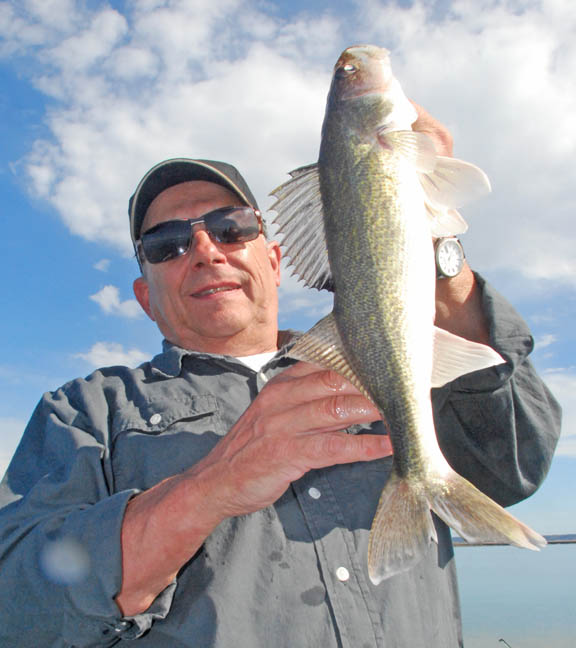 Anglers fishing the water below the gates when water is released need to be cautious; as water coming through the gates comes through with tremendous force and has a tenancy to move in different directions.

Anglers using a controlled drift when fishing these waters with their trolling or kicker motors can zero in on the fish washed through the gates and those, which have moved upstream to take advantage of the influx.

With large releases, the downstream current will pick up, drawing fish upstream towards the release to take advantage of the influx of new nutrients coming into the river.

Increases in flows can also help to improve the fishing several miles downstream. As once the water reaches the exposed sandbars, points and shoreline in these areas, over-topping them, insects, worms and other aquatic life left high and dry when the water level dropped are now washed off the downstream, into the slack water pockets behind these areas.

Smallmouth bass, walleye, sauger, catfish and other species of fish will move up along the backside of the sandbar where the water is washing over and feed on that that washed off the bar.

Livebait rigs are your best bait when fishing rising water levels. Jigs, Lindy rigs, slip bobber rigs and spinners tipped with minnows, leeches or crawlers can be deadly when fished at these times.

Rising water levels can trigger lethargic fish into feeding and when the water is on the rise, you can bet the fish will head up stream to take advantage of the new food source that is coming downstream.