High-Water Paddlefish In the Year 2019 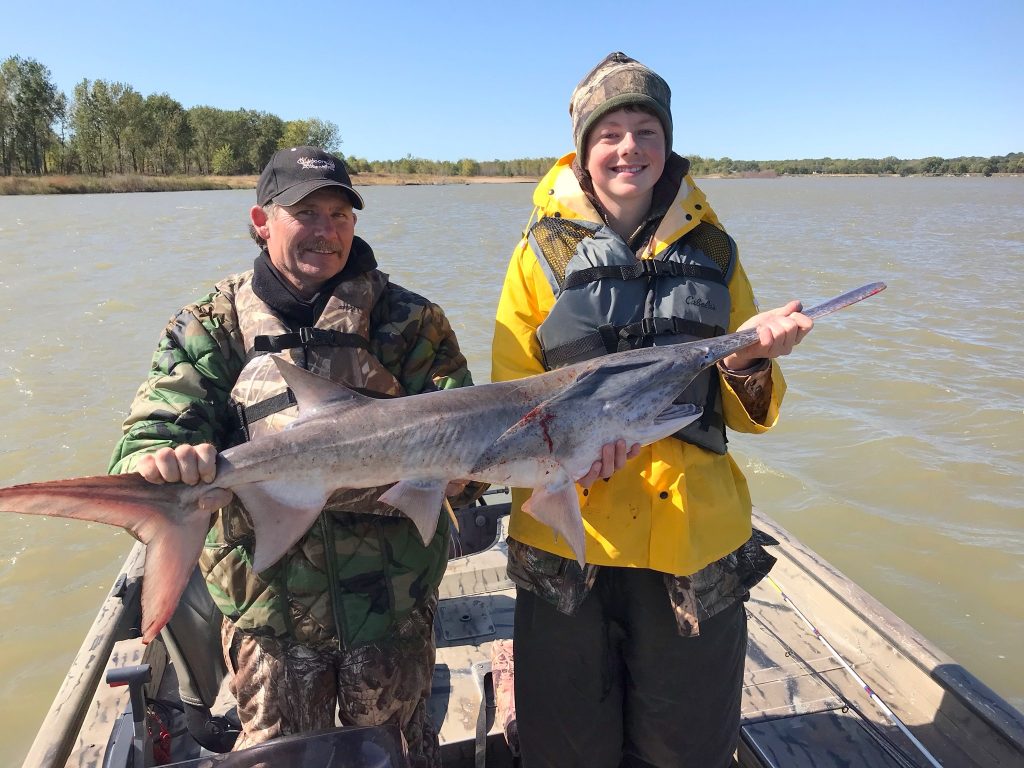 As we came up into the waters surging through Gavin’s Point Dam, it was obvious that the 2019 Paddlefish season was underway, with “hundreds” of anglers lining the shore.

Anglers were wall-to-wall from the warning sign at the end of the wall, down along the rocks past the Bubble, while on the Nebraska side they were snagging from the fast water coming out of the turbines down past the boat dock.

All were equipped with long heavy rod and weights, which they hoped would allow them to fight the heavy current and snag a fish

Paddlefish, which are filter feeders, feed by siphoning plankton from the water, which means, the only way to catch them is by snagging.

These fish grow to monstrous size, as the Nebraska state record stands at 113 pounds 4 ounces while the South Dakota state record tipped the scale at 127 pounds, 9 ounces.

In order to snag the fish, the angler must use heavy tackle, casting out a heavy weights and the small treble hook, then yanking back on rod while retrieving the line, which causes the weight, and hook to rip through the water.

Unless you’re extremely lucky, it’s repeated multiple times until extra weight is felt and then set the hook hard while reeling and bring in line as fast as one can.

Once the fish is hooked, the real work begins, as these fish are major fighters and depending on where they’re hooked, will test the strength of even the strongest human.

A prehistoric fish, one that has been around seventy to seventy-five million years is only found in China and the United States.

Because it was the opening weekend, we knew it would crowded below the dam, and because this Sunday was the only day that our crew could get together to try to fill our two paddlefish tags we were here.

One of my original Team Outdoorsmen Adventure members and guide Marlyn Wiebelhaus, Wynot, Nebraska agreed to help my grandson Ted Slaba, Wagner, S.D. snag his first Paddlefish, in the boat with them were his mother, my daughter Mieke Slaba and myself.

Because of the 80,000 cubic feet per second discharges coming through the dam, there was a tremendous amount of current, making it tough not only to control the boat, but also creating problems for the “hundreds” of snaggers lined up along both shoreline.

Both Ted and I had permits, with Mieke running the camera, as we hoped to obtain enough footage of the snagging on the river to edit into one our Outdoorsmen Adventures television series.

The heavy discharge, the waves and heavy current coming through the dam, really bounced the boat around, making it tough to film a show that wouldn’t make our viewers seasick.

We spent several uneventful hours to no avail, snagging below the dam and I can honestly say that in those two hours I didn’t see a paddlefish caught.

Marlyn then brought the boat around and headed downriver into the few slack water available to work, hoping that some paddlefish had taken refuge behind those current breaks.

There were other boats snagging in the first two holes we had hoped to work, so we waved as we motored on by heading east to look for another hole or some sort of current break.

As we arrived at the next location, we maneuvered on up to the top of the current break, with both Ted and I snagging, as the water erupted with dozens or more of Silver carp going airborne crashing all around us, into the boat, with one landing near my daughter, who wanted nothing to do with it.

Silver carp, one of the three invasive fish species in the upper Missouri River go airborne when they hear or feel the vibration from the boat motor.

These fish are a tremendous threat to our fisheries as they feed, constantly, filtering up all of the plankton in the water, the plankton that the young of the year gamefish and Paddlefish need to survive.

After several passes through the hole, I had one good bump, but when I set the hook, it was gone, so we moved on.

Arriving at the next hole, which ran along the edge of a sand bar that used to be the southern shoreline but because of the heavy discharge coming downriver was now located in the middle of the river?

The first pass through the hole was uneventful, on the second; Silver carp bombarded us on all sides, some were huge and looked to be twenty plus pounds.

After several other passes, Ted’s rod jolted as he did his best to control what he hooked and as it surfaced along the shore, Marlyn indicated, “it’s a paddlefish, try not to horse him.”,

At about the same time, I coached him to keep his rod up, just what he didn’t need, my coaching, as he was intent, trying to keep from having the rod pulled from his hands.

The fish headed out into the current, but Ted masterfully brought it out of the main channel towards the boat.

As Marlyn and I looked towards the fish coming into the boat, it was obvious that we both thought this fish would be in the slot.

When snagging any Paddlefish those that measures thirty-five to forty-five inches from the eye to the fork of the tail, is a slot fish and then released, as they are the future spawners.

Ted broke into a smile as he struggled to bring the fish to the boat, Marlyn said, “hook it again as it looks like it’s not hooked all that well” I grabbed it, quickly hauling the fish into the boat.

Now, it was down to the tale of the tape, with Ted holding the tape at the fork of the tail while Marlyn checked the length at the eye. 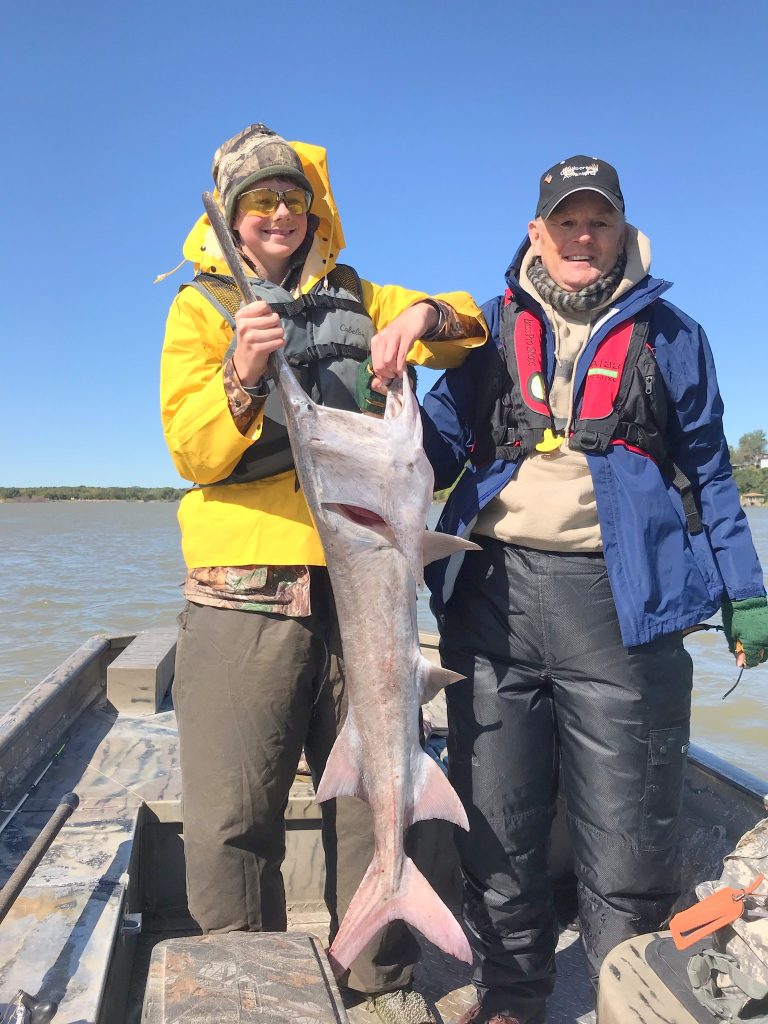 Marlyn said “35 and 3/8″, just 3/8th of an inch too long” and as Ted and I released the fish, it was easy to see his disappointment as he had worked hard to land the fish.

Once again, we motored back through the hole as all around us; Silver carp erupted out of the water but as we finished fishing the hole, no Paddlefish, so back into the hole we went.

This time, Ted’s rod bent and once again he was in a fight with another fish, and as he landed it, the fish wasn’t what we were looking for as he had hooked a big Silver carp.

Back into the current break hole we went and after several passes, Ted’s rod came crashing down on the side of the boat as he fought hard to bring the rod tip up, cranking hard on the reel to gain line on the fish.

This time as the fish came up, Marlyn indicated, “that’s a nice keeper fish” and as I hoisted it into the boat, Ted was beaming again, hoping that this fish was under the 35″ slot.

Marlyn read the tape, “its 37”, with Ted looking on in wonderment, as he knew it was smaller than the last fish.

Marlyn who’s quite the jokester then said, “No not really its 32, a nice keeper Paddlefish” with Ted braking into a big smile.

It was time for congratulations with handshakes, high fives, fist bumps and hugs as on Ted’s first paddlefish tag application he had drawn his tag, and then on his first snagging trip caught two paddlefish.

Marlyn & Ted tagged the fish as numerous phones and cameras came up with photos taken by Ted’s proud mother, myself, his proud grandfather and Marlyn, the photos then posted on several Facebook pages and web sites.

Since I had most of the month to snag, I decided that Ted had worked hard enough to tag his fish and they didn’t need to hang around while I snagged so we decided to call it a day, allowing Ted and Mieke to head back home to Wagner.

Marlyn and Ted headed over to the cleaning station to clean the fish and were surprised to find it closed, which meant that you know who, Gary Howey would have to clean the fish at my office and freeze it until the kids came home.

After cleaning the fish, I truly hope that I hadn’t cut away too much meat while removing the nasty red meat and that Slaba family would get one or maybe two meals out of it, no, I’m only kidding.”

Paddlefish snagging can be a lot of work, prepared in numerous different ways, but once prepared is considered pour man’s lobster and makes for some excellent eating.

Gary Howey, Hartington, Neb is a former tournament angler, fishing & hunting guide, an award winning writer, producer, and broadcaster,  inducted into the “National Freshwater Fishing Hall of Fame” in 2017. He is the Co-Host of the Outdoorsmen Adventures television series and Outdoor Adventures radio. If you are looking for more outdoor information, check out garyhoweysoutdoors.com, outdoorsmenadventures.com and like Gary Howey’s Facebook page or watch his shows on www.MyOutdoorTV.com.

← Prev: Return to Lake of the Woods' Next: South Dakota's 101st Pheasant Season →