There’s something to be said about ice fishing when it’s fifty degrees, it’s not the type of weather you usually associate with ice fishing.  For one thing, your hands and the rest of your body isn’t as cold as those minus thirty-three wind chill days you had been on the ice. That day when we traveled five hours north with a film crew and had to film as we had been invited up by one of our sponsors and the day before wasn’t as bad with the weatherman indicating that the following day wouldn’t be all that bad!

On fifty-degree days, you can fish without heavy gloves, making it easier to untangle your lines and easier and quicker to tie on or bait ice fishing micro baits when you don’t have to wear gloves.

The best thing about it is you don’t have to bribe your friends to go ice fishing with you.

When the forecast for Friday February 10 was for fifty-degree weather and little wind in the morning, it sounded like a good time to hit the ice.

Some of my fishing partners were worried about the ice and not having enough ice but after I assured them that there was eight inches a few days before, they were all in.

Dani Thoene and I hit the ice first, with Dani punching holes and me following up behind him to clean up the ice mound around the hole and scoop them clean.

Larry Myhre, Sioux City, IA. pulled in shortly after we arrived and set up on one of the holes to the east of where I was fishing.

Ten minutes later Anthony Thoene arrived and began fishing not too far from where Larry had set up, with Melvin Kruse rounding out our crew.

We’d be fishing on a privately stocked pond in northeast Nebraska, one that I’d fished in open water and knew there were some big fish patrolling the depths as on one occasion, I was fishing with heavy line and was broken off when a big fish hit my lure and broke me off in open water.

We all had Vexilar locators, showing letting us know when fish moving in on our baits, but as many fish do in the winter, they weren’t overly aggressive.

I rigged up a live bait bobber rig with a minnow and jigged with another rigged tipped with a wax worm hoping to entice a crappie. Larry, Dani and I were doing a number on the smaller bluegill and bass, with two or more of us pulling fish up at the same time.

A thick red line, indicating a fish moved up under my bait, I raised my bait just a bit, as I waited for the fish to move up to the bait, I watched the sensitive spring bobber at the end of my rod as it will indicate a bite long before you feel it. 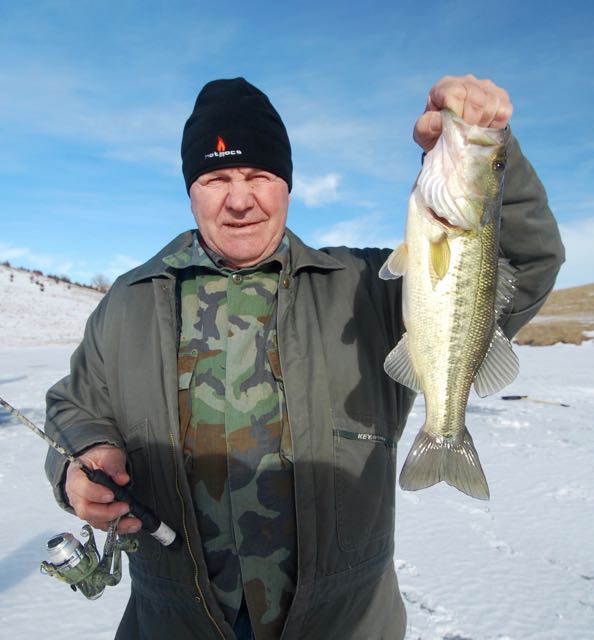 The spring bobber dipped slightly, I brought the rod up, setting the hook, the way my rod was bending, and it couldn’t be a little fish like the ones we’d been catching earlier. I let my fishing partners know that I had a big fish on and as the fish, made a run I tried to slow it down, my drag didn’t release and the fish came unbuttoned.

All I had to show for not checking the drag setting before putting my bait down and loosing the fish was course the gentle ribbing from my friends about my so-called “Big Fish”.

Shortly after I lost my fish, Anthony set the hook on a good fish, and iced a good bass, the largest of the day.

We spent the morning trying different depths, changing lures frequently, trying to come up with a pattern. We knew there were other species of fish in the pond besides the bass and bluegill we’d caught. In this stock dam, on previous outings, I’d caught crappies, catfish and was certain that the fish that broke my heavy line that summer was a northern; by the way, it hit the bait and fought.

Melvin and I had the bluegill figured out and I would catch an occasional small bass, but the other fish had us beat. It didn’t matter what we were using jig, spoons, tungsten baits, minnows or plastics, we just couldn’t find the crappies or other species we had hoped to catch.

As it approached noon, the bite died off, our crew grew smaller as Anthony, and Melvin departed with Dani heading out a short time later.

Larry and I held out until noon and as the wind started to pick up; we loaded up and headed for Sudbeck Service in Bow Valley for a quick lunch before heading home.

This was an enjoyable trip and may be the only ice-fishing trip we’d do in fifty-degree weather, but you can bet the next time the weather is that nice, our crew will hit the ice, enjoying a spring day in the dead of the winter.