Coyote calling can be an unexpected adventure By Larry Myhre

Things don’t always go as planned when you are calling coyotes. Maybe that’s why I enjoy it so much.

If you are calling in coyote-rich country such as western Nebraska, there’s little doubt you can call in several in a day. Other places, not so much.

If I can call in one coyote for six different sets, that’s about average. So, you will spend a lot of time looking over the landscape with nothing to show for it.

But sometimes you get the surprise of your life.

It was early morning on the Rosebud Indian Reservation in South Dakota a few years ago. Three of us were set up alongside a deep, tree-lined ravine. We were each leaning back against a tree trunk and looking out over the prairie. The sun was beginning to peek over the horizon spreading its light slowly. It reminded me of raising a shade in a dark room.

Suddenly, out of the ravine burst a big, mangy-looking dog, snarling and looking left and right for that dying rabbit. I was holding the camera, not a gun and the beast was now right in front of me, staring into my eyes. I had tangled with wild dogs before and knew if they see a gun they will run. I had no gun. Yet, in a heartbeat he turned and ran back into the ravine.

We called in a bobcat on that set, but the season was closed. The cat crossed right in front of us through a 100-yard long clearing and into the same ravine the dog had come from.

The cat ended up sitting in a plum patch not more than 12 feet away from one of us. After its curiosity was satisfied it turned back into the ravine and vanished.

Sometimes a little humor can be included.

Fran and I were with my cousin Denny Myhre and his wife, Audrey, driving down a road, I think in Grand Teton National Park, when two young coyotes crossed in front of us. I grabbed my camera with the 300mm lens.

Just as I left the car another filled with Japanese students pulled alongside asking what we had seen.

I ran over the rise that was hiding the vehicles and ran about 200 yards to a lodgepole pine, which I got behind and began trying to catch my breath. Then I saw the two coyotes about 200 yards off and heading away. I did my dying rabbit sound with my mouth and as soon as they heard that they began running in. Hiding behind the tree trunk, I began making pictures of them.

At about one hundred yards out they stopped. I did the mouth squeak several times but they would not respond. Then they turned and ran.

“That was strange,” I thought. “They were about five-month-old pups and should have run right in.”

Then I turned and saw a few feet behind me, six students standing on a big rock who then began laughing and pointing saying, “Wolf, wolf.” 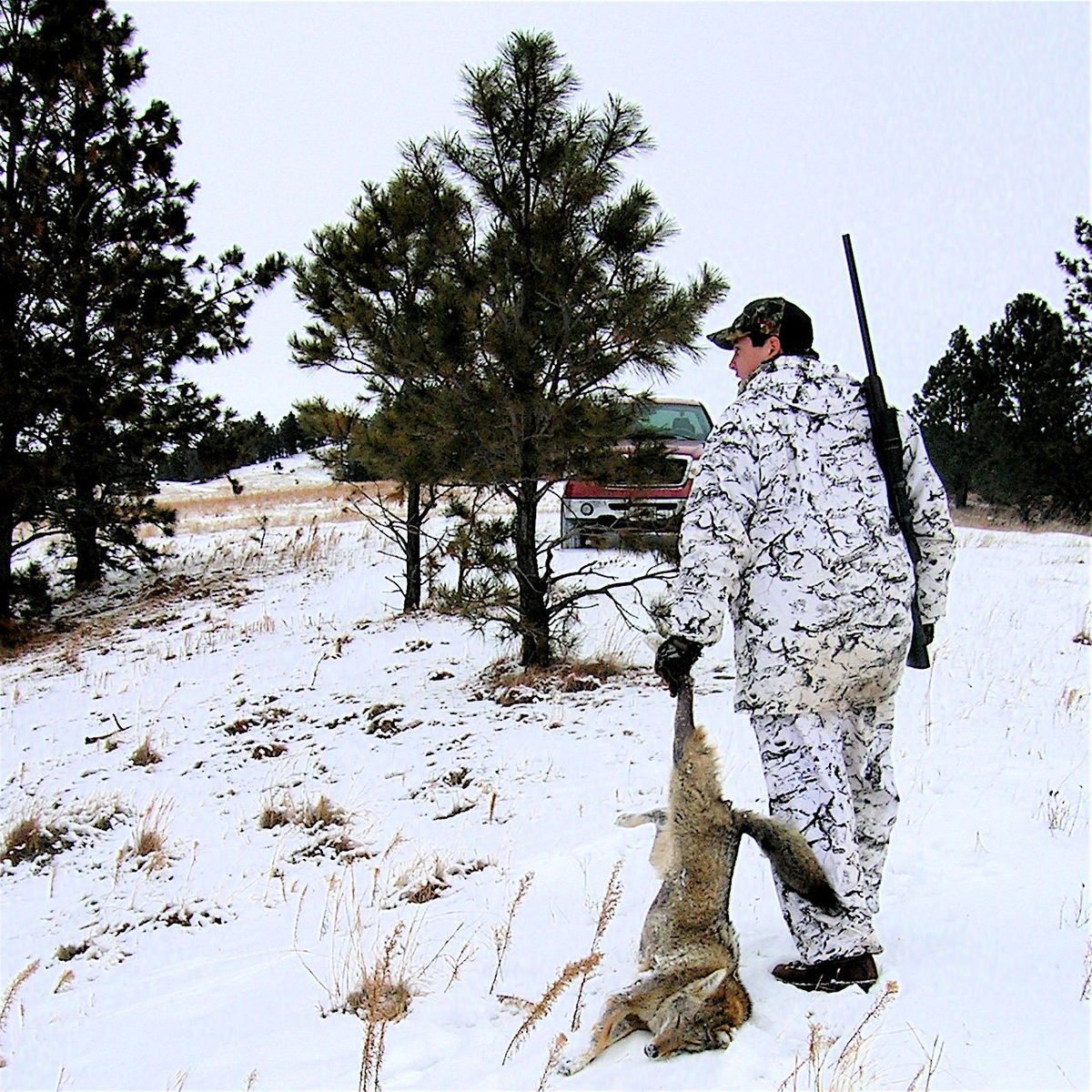 When it comes to calling coyotes, you can’t find better country than this. Numerous canyons and brushy cover offer plenty of places to hole up during the day and hunt during the night.

Then we looked at my pictures, which were pretty good, but they could have been, oh so much better.

Speaking of young pups, your best chances of successful calling is right after the first snowstorm, usually sometime in November in our area. Probably 40 to 50 percent of the coyotes on hand that time of year will be pups, uneducated and probably hungry.

By March coyote numbers may be as much as 50 percent fewer because of hunting and trapping. So if you are a beginning caller, get out early.

Another funny calling story didn’t happen to me. It happened by my cousin Denny. It was in the late 1960s when we both were living in Sioux City. Denny and his family were renting a rural home just north of town. Calling techniques were just beginning to be developed and we both had calls. There weren’t many coyotes around in those days, but there were lots of foxes. That’s what we zeroed in on.

It was early evening on a warm, late fall day when Denny decided to walk out to a brushy fence line and began calling. His pick of a calling spot was rather poor. He sat back against a post on the woven wire fence, and began his rabbit serenade. In front of him was a plowed field. No cover out there. Bad choice. The edges of plowed fields always had what we called a dead furrow. Picture a flat trench about eight inches deep running the length of the field on the outside edge. Foxes often run down those.

Next thing Denny knew a fox had jumped right between his legs and they both sat there nose to nose.

“I don’t know who was scared the most,” Denny told me later, “but the look on the fox’s face was priceless.”

Naturally the fox got away, unscathed.

I’ve called in a lot of great horned owls over the years, but nothing equals my experience two years ago. We were calling in the rugged hills north of Verdigre, Nebraska.

My rifle was on a bipod, my head against the stock and the mouth call on my lips. I had just finished a series of rabbit calls when the big owl swooped in. His feet almost dragged across my rifle scope and his wingtip brushed my cap. He landed in a nearby tree and looked us over. Then he flew away.

That owl had come from another ravine just over the hill to my right. If there had been a rabbit on top of my scope, that big predator would have had it. They say great horned owls can hear a mouse under the snow and pounce on it. Now I believe it.

Sometimes you just have to shoot in self-defense.

Denny and I were in Wyoming driving my truck over what I suppose you could call a road. It was just a dirt track leading from one oil or natural gas pump to another through this high-desert-like territory, nothing but sagebrush as far as the eye could see.

It was all pretty flat but we soon came upon what passed for a draw in that arid country. I looked it over and decided a coyote could be holed up there somewhere. I backed up to where the truck would be out of sight, and we moved in.

I carried my .243 and Denny fiddled with a video camera. As soon as we set up, I knew this could get ugly. The sagebrush was about four feet high and thick. We had an opening maybe 30 feet in front of us and that was all. I suddenly yearned for my shotgun.

I told Denny to get ready. With lots of cover, coyotes often come running in.

I sent out a series of calls and then rested for a bit. I was into my second series when I saw the coyote crest the ridge and come charging down toward us.

I dialed the Leupold back to 3X, adjusted the bipod, snuggled down on the stock of the Ruger M77, took a deep breath and slipped off the safety.

I hoped I could hear him running in.

He came into the clearing at full speed, and I pulled the trigger. I don’t think I even looked through the scope. He did a backflip and was back in the sagebrush.

“Did you get that?” I asked Denny.

Like I said, sometimes you get the surprise of your life.