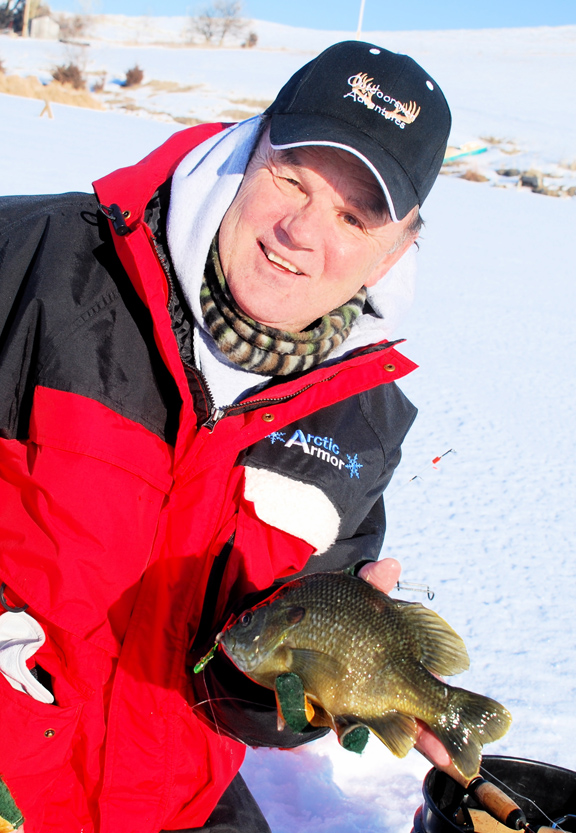 The author, Gary Howey took several good size bluegills, fishing early season on a pond with a good five inches of ice, there were others locations on the pond where because of springs, beaver and flowing water that had only a couple of inches of ice. (Larry Myhre Photo)

Each year with the arrival of colder weather, people start calling and emailing our offices asking about ice fishing and where they’re biting.

In my neck of the woods, the warm weather we’ve had, 45-49 degrees there is very little if any ice, but farther north, in the Glacial Lakes area, of South Dakota, the Watertown area and further north in lakes like Big Stone located north of Watertown on the border between South Dakota and Minnesota they’ve had good ice in these locations for several weeks.

One thing you need to be aware of is that when the snow piles on the ice, it insulates it acting as an insulator, not allowing the cold temperatures to get down and freeze the ground or the water.

Of course, the ice may look strong or be solid along the shoreline where the snow has blown clear, when in fact there are probably areas on the lake that have very little ice because of the snow that covers it.

I’m sure that most of you know that have been on the ice before, check the ice before heading out on any body of water to ice fish, and for those of you that are just getting into it should be aware of the potential dangers of ice, and should check out the cautions listed below.

Ice color is a good indicator of the strength of the ice.  Look for clear blue ice, which is the strongest because it’s developed by a constant steady freeze. freeze.

Ice that you want to avoid is a black, gray or honeycombed, developed because of repeated freezing and thawing and the black or colored or dark spots suggest open water, thin ice, indicating that there may a spring or some current under the ice, both of which are dangerous.

As I mentioned earlier in this article, snow cover insulates the ice, inhibiting solid ice formation and making it almost impossible to judge the diameter of the ice.

Other locations that may have thin ice include; icehouses, fishing piers and bridges as the absorb the sun’s heat and increase melting.

Exposed vegetation on the ice is a good place to start fishing during first ice as the fish will still be relating to it, but, as with those locations mentioned above, the vegetation will also absorb heat from the sun and rotting vegetation can create its own heat.

There are several other things that you may not think about that may case thin ice, fish, muskrats, beaver and other animals swimming under the ice can weaken it, which is especially true in shallow lakes and rivers.

Moving water can weaken ice as much as 15% with the wind which creates a pumping action that will force water through the breaks and cracks enlarging them, making them bigger over a short period of time.

When crossing ice on foot and you’re not sure of the thickness, it’s safer to slide your feet instead of stepping, helping to distribute your weight more evenly.

To be on the safe side I may carry my Jiffy Ice chisel to check the thickness of the ice as I work my way across the ice.

Each time I go onto the ice, another safety piece of equipment I take with me is a set of the Clam “Floatable” ice picks, they’re compact and lightweight, with 30” of accordion style retractable, nylon cord, that I always with me and if I happen to fall through, I’m able to use the picks jabbing them into the ice, allowing myself to get out of the water and onto the ice, to roll away from the hole instead of standing up, helping those who’ve fallen in to get to the thicker safer ice.

The general rule of thumb when it comes to how much ice it takes to support you and your equipment on “clear-blue” ice formed under ideal conditions is listed below.

With every angler needing to be prepared in the event of an emergency so you’ll want to be sure that you know the “Reach Throw and GO method and if you have someone that falls through the ice,

First, you try and “REACH” them with a long pole, board, rope or blanket.

If that doesn’t work, THROW a life jacket, empty water jug, floatable seat cushion or other floatable piece of gear to them like the Clam’s Emergency Throw Rope that’s a good idea for you to carry while on the ice and if the ice breaks, there’s 50 feet of highly visible orange colored rope, with an easy-to-throw lightweight floatable bag weighing only 1.1 pounds with an integrated bag strap which attaches directly to your ATV or snowmobile.

Then as a last resort, GO to the victim and if this be necessary, form a human chain to reach the victim, a human chain that can be made by lying on the ice with each person holding the feet of the person in front of them and once the person is out of the water to quickly bring them to a warm environment before hypothermia sets in.

Early Ice fishing can be very productive and a lot of fun, but before venturing out during first ice, make sure the ice is safe, as unsafe ice leads to a disaster, so don’t rush to get out there.

The colder weather and ice will be around for several months and no fish is worth falling through the ice!!

Gary Howey, Hartington, Neb. is a former tournament angler, fishing and hunting guide. He was the Producer/Host of the award-winning Outdoorsmen Adventures television series, seen in nine states in the upper Midwest. In 2017, He was inducted into the National Freshwater Fishing Hall of Fame. Host of the Outdoor Adventures radio program on Classic Hits 106.3, ESPN Sports Radio 1570 in Southeastern South Dakota, KWYR Country 93 AM and Magic 93 FM in Central South Dakota, As well as on KCHE 92.1 FM in Northwest Iowa. Looking for more outdoor information, check out www.outdoorsmenadventures.com and Gary Howey’s outdoors, Outdoor Adventures radio and Outdoorsmen Adventures on Facebook

← Prev: The Gamekeepers of Mossy Oak-Food or Cover When Managing Smaller Properties? By Todd Amenrud Next: Smoked Turkey Recipe →