If you’re thinking Pheasants You have to be thinking South Dakota! By Gary Howey

If you are an upland game bird hunter, you have probably heard the stories about the great pheasant hunting in South Dakota.

As I travel throughout the U.S. and talk with people about hunting and the outdoors, the first question they ask when hearing that I am originally from South Dakota is, “I hear the pheasant hunting is pretty good up there?”

Any ways, that would be their lead in to the conversation because they already know darn good and well that the pheasant hunting in South Dakota is phenomenal!

They had either been there, read about it or wished they could be there during the next pheasant-hunting season!

When I lived in South Dakota, Watertown to be exact, we just took it for granted that everyone had pheasants as we did.

It was nothing to walk from my home in southwest Watertown and see pheasants everywhere. They were part of the landscape like the cattle and other animals we saw around the farms and you did not have to go very far before you saw the next bunch of pheasants.

With each trip to South Dakota I am reminded what pheasant hunting was really like.

My hunting partner Larry Myhre and I were both born and raised in South Dakota and have hunted pheasants throughout the state. On each trip, we remembered the South Dakota from years past. In fact, it just seems to be getting better with more acres to hunt and excellent bird numbers. The South Dakota pheasant road count show a 42 percent increase in the statewide pheasants-per-mile index compared to 2014. This road count and the 150 percent increase overall since pheasant numbers were at a recent low just two years ago 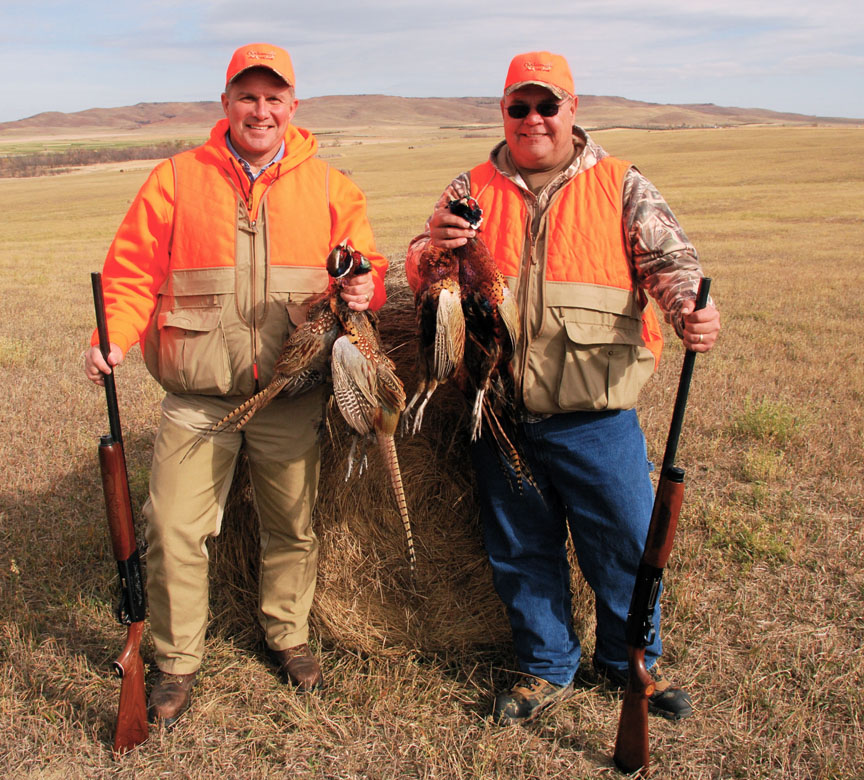 The hunters’ cry of, “rooster” can be heard continually all though the season as the brightly colored birds take flight from grasslands, sloughs and crop ground.

South Dakota is a place where a group of strangers can spend time in the field, becoming friends; leave the hunt knowing they had just experienced one of the most exciting things in the outdoors, a pheasant hunt in South Dakota.

The hunting is great, and so is the South Dakota hospitality.

Habitat is the key to good wildlife numbers, and South Dakota is among the best when it comes to developing and improving habitat.

Unlike other states where every available acre is torn and put into row crops, South Dakotans realize what an asset the wildlife is. Instead of tearing everything up, they provide habitat, preserving the sloughs, creek bottoms, shelterbelts and grassy fields so that pheasants and other wildlife will have a place to raise their young.

They also plant food plots or leave some crops in the fields, helping wildlife to make it through those tough Dakota winters that show up every now and again.

Another thing that helps to draw hunters to South Dakota is plentiful access to public hunting land. Hunters in South Dakota can hunt road ditches and right of ways. This along with the Game, Fish & Parks’ Walk-In-Access program provides thousands of acres of public land to hunt.

South Dakotan’s realize that a sustainable wildlife population will benefit the economy and that many hunters out there want to hunt pheasants in South Dakota. The dollars generated by hunters each season is a tremendous boost to the state’s economy.

No matter what you are looking for when it comes to a pheasant hunt, you can find it in South Dakota!

If you want to spend a couple of days hunting with your son or a friend, you can do it inexpensively by hunting public hunting areas.

Want to hunt on private ground,  there are several alternatives available as in South Dakota as you can find as fancy a hunt as you are looking for.

There are hunts where you simply pay a fee for land access ranging all the way to the top of the line hunts that are fully guided including world-class lodging and meals. These are all available in South Dakota.

So if you want to do some “real’ pheasant hunts in “real” pheasant country, then look to South Dakota because it doesn’t get any better than this!