In Pursuit of Those Acrobatic little Flyers, THE DOVE 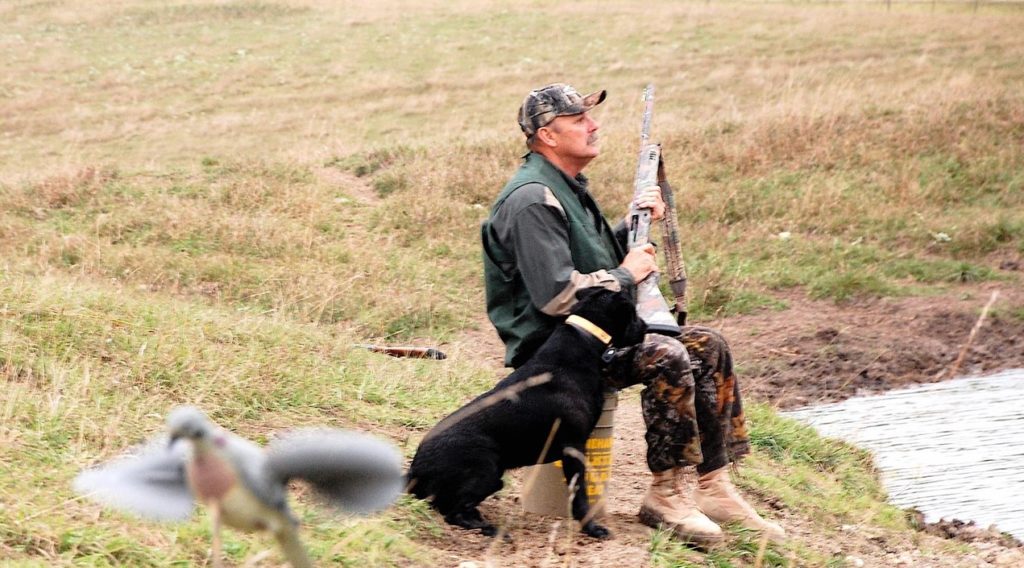 Gary Howey, Hartington, Nebraska and his Black Lab Mo Jo watch the sky, awaiting the next flight of doves to come into the pond. (Larry Myhre Photo)

On Tuesday September 1st, hunters throughout the upper Midwest will be out in the crop fields and set up around stock dams when they open the 2020 Mourning Dove hunting season.

The Mourning Doves, are migratory bird found throughout the United States and the most popular game bird in the country in terms of harvest.

You best be on the top of your game when hunting these acrobatic speedsters as they seldom fly in a straight line, changing their flight path in a second, having the ability to fly up to fifty-five miles per hour.

In South Dakota, the dove season is open from the first of September through November ninth, with both Mourning doves and the Eurasian collared doves found throughout the state, the daily bag limit for doves is fifteen a day and forty-five the possession limit.

All migratory bird hunters, including dove hunters must complete and purchase the “South Dakota Migratory Bird Certification” information on this is available on-line at https://gfp.sd.gov.com

In Nebraska the dove opener is the same as our neighbor up north, closing a couple of weeks earlier on October thirtieth.

In Nebraska, hunters may have an opportunity to hunt three species of doves, the mourning Dove, Eurasian Collared, and White Winged doves in the southern part of the state.

If you plan on hunting migratory birds in the state, which doves are, you’ll need to register on-line at www.OutdoorNebraska.org  with the states ”Harvest Information Program (HIP) before hunting.

Doves may be thick in and around a dam one day and with a weather change will be long gone the next day, migrating out of our area.

It doesn’t take much for these birds to begin their southerly migration, a weather change, cooler nights, and rainy days will cause the birds to bunch up and if these conditions persist, they’ll head south, where, They’ll spend the winter in the warmer climates in the southern United States, Mexico and Central America.

Once our local birds move south, we’ll still have an opportunity to hunt those migrating birds that will be coming in from the north

Doves are seed feeders, feeding in planted and harvested grain fields including millet, wheat and sunflower fields as well as fields that contain rag weed and marijuana as dove love the small seeds these weeds produce.

If there’s rag weed and hemp around the ponds, the doves will continue to come in to feed throughout the day

Some of the best hunting can happen near waitering holes in the early morning as the birds fly out from their roost and late afternoon when the birds come to drink as they make their way back to roost, before calling it a day.

When hunting around ponds, it’s best to have several hunters stationed on either side of the water to keep the birds moving and because doves are such erratic flyers, you never know what direction they’ll come from and by having hunters around the pond or on different ponds in the area, the other hunters are able to let you know if the birds are coming in behind you.

Because you’re hunting over water, a good dog is a real asset to retrieve those birds that dropped into the pond.

Other areas where hunters locate good numbers of doves include; along shelter belts or heavily wooded areas as well in weed patches where they may feed.

It doesn’t take much to down a dove, as long as you can catch up with and get a bead on these swift little buggers.

You shouldn’t feel bad when missing a few birds as the only ones to get on your case will be your dove hunting buddies, as it’s been said, the average dove hunter may shoot up to 9 shells per bird.

Doves, because of their size, once down can be hard to find, with a GOOD dog hard to beat when searching for a downed dove.

As far as shells, I use a # 8 or 9 AA Trap loads, while others shoot 7/8- and 1-ounce loads, depending on what’s on sale when they need dove loads.

Evening hunts work well after work where we ‘ll set up around a farm dam or stock pond, with our most productive hunting as the sun gets low until sundown when doves come into the ponds for water.

When scouting for a dam to hunt doves on, the best ponds will have with dead trees or trees that have open branches and open ground along the edge of the water.

Doves prefer to land in the trees and overlook the pond before landing to get a drink, landing  on the bare ground along the pond’s edge with the best shooting will be on the side of the pond that has these areas.

I hunt doves because they are a challenge and it’s an excellent opportunity if you have a dog and yourself out for some early season exercise and practice.

It doesn’t take much to draw doves to a pond during the early season, but as the season progresses, doves become more wary and can be tough to draw into range.

During the latter part of the season, I’ll  use dove decoys to bring the birds in.

Serious dove hunters use motion decoys in order to bring those educated, the migrating birds into range.

I have a battery-operated Mo-Jo Dove decoy as it’s rotating wings and the wind driven decoys whose wings spin in a slight breeze helping draw attention to the area that you want the doves to move through.

Some say camouflage isn’t all that important when dove hunting, depending on the pond I’ll be hunting and its lay out, I wear some camo or a natural neutral color such as brown or light green to blend in.

To keep hidden from these sharp-eyed birds, I can usually find a wash-out, depression. weeds or tree that I can hide behind to keep me out of sight.

In several states including South Dakota and Nebraska, doves have been banded and when hunting  doves, you’ll want to check your birds for leg bands and If you find one, you should contact the U.S. Fish and Wildlife Service at reportband.gov.

If you want to sharpen your wing shooting skills and enjoy some fine eating, give dove hunting a try!