It’s A Drag, And It best Work  By gary Howey 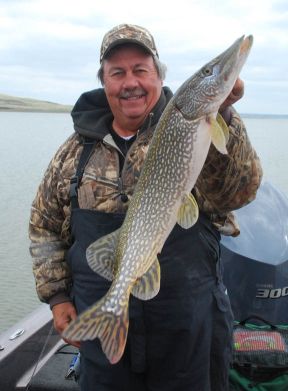 When fishing on Oahe as well as other small rivers, you can be fishing for walleyes, with your drag set fairly light and have a big pike grab your bait. This is when Chuck Krause, Originally from Watertown, S.D. used his second drag and by putting pressure on the spool, he was able to land this sharp tooth pike which gave him the opportunity to bring the fish to the boat and land it (Gary Howey Photo)

No matter, what you’re fishing for, every reel has some sort of a drag: star, front mounted, center mounted, rear mounted drag system.

If you put you rod and reel away for winter without loosening the drag, you may be in for a big surprise the next time you use it, as most drag systems are a couple of fiber washers that press against each other, allowing the spool to release.

But, if you didn’t loosen the drag, as the washers may be wet and once put away wet, could and possibly become frozen or stuck together, so it’s very important to back your drag off before putting them away for the season.

Your reel drag setting is very important, as it lets your spool with your line slide when extra pressure is put on the line by a hard charging fish.

There are some anglers who think that the only drag they can rely on is the reel drag, Wrong!

Others, don’t realize the importance of the lack of a heavy drag in playing a fish.  While it’s true a drag needs to be set tight enough to work fish out of heavy brush and trees, and for normal fishing, the drag should be set at about 1/4 of the lines breaking test.  For 10-pound line, you should have your drag set so that line will be released when two to – four pounds of pressure is pulled against it.

A good method of checking your drag would be to pull on your line, exerting slight pressure and if the drag doesn’t allow you to pull line from the reel, it’s more than likely set too heavy or tight.

Why, because as more line is stripped from the reel, the friction of the line running through the water actually increases the drag, at times doubling the amount of drag being applied.

Another reason that a drag should be set loosely is that it can always be tightened.  A tight drag can’t always be loosened, especially when you’re fighting a big fish as you’re concentrating on getting the fish in and may not have time to mess with the drag.

Your second drag is your palm of your hand or your fingers or maybe a couple of them.  But regardless, the manual finger drag you can apply to the line at any given time is invaluable when playing a big fish, especially one that’s running.

When using a bait casting reel, it’s your thumb that handles the second drag chores, most fishermen are aware of this!  But when it comes to spinning, fly-fishing and spin casting, many folks think the drag on the reel they set is the only drag they have.

Also, when a fish is brought to the boat or the shore, there’s a good chance that it will make a sudden lunge.  With your drag set too tight, it may break off or pull loose.  With a loose drag this won’t happen.

With the “second “drag in hand and the reels drag set loosely, you’re always in control.  If you need to tighten the drag, just apply finger pressure to the line spool.  This way, if the fish should make a sudden lunge, you can easily let off the finger drag and allow him to pull against your loosely set drag.

Another piece of your equipment, that when used properly in combination with the drag will help you to land a big fish, and that’s your rod as the right action rod will bend when the fish makes a run, taking pressure off of your line.

When fighting a fish, you’ll want to keep your rod tip high, allowing the pressure to be taken off the drag and absorbs by the rod. Then, keeping the line tight, reel down towards the fish, then bring your rod back to a high position, allowing the flex in the rod to put pressure on the fish and then reeling as this allows the rod to do the work, while not overworking the drag

The important thing to remember is to allow your rod to work properly and that the second drag, our fingers will always be there if you need to apply more pressure.