WEBSTER, S.D. — When those big old cottonwoods begin shedding their bright yellow leaves, there awakens in me an almost uncontrollable desire to be on the water.

And not just any water.

No, I begin to dream of lakes harboring strong populations of those big ole brown fish. And if you don’t do Southern speak, let me interpret for you. We are talking about smallmouth bass.

In my book, the smallmouth bass is the fightingest freshwater fish that swims.

And the best time to take numbers of huge smallies, sometimes in areas no bigger than your average living room, is right now till freeze up.

That’s why I called my brother Dean, who lives on a farmstead near Worthing, S.D., and asked if he wanted to chase big smallies on a couple of northeastern South Dakota lakes. It was, of course, a question that needed no answer.

Fast forward a few days. We had been fishing maybe five minutes when Dean’s seven foot spinning rod bent over and began to pulse with the thrust of a good fish.

“Got one,” Dean muttered to no one in particular, and I began digging for the landing net. It’s a fold up style and takes a little bit to get unlimbered and ready for action.

“Should have gotten this ready before we began fishing,” I said as I opened the mesh and began pushing buttons and sliding the handle back and forth.

I got the thing together just as the three-and-a-half pound smallie surfaced alongside the boat. I dipped him up and placed the net in the boat at Dean’s feet. 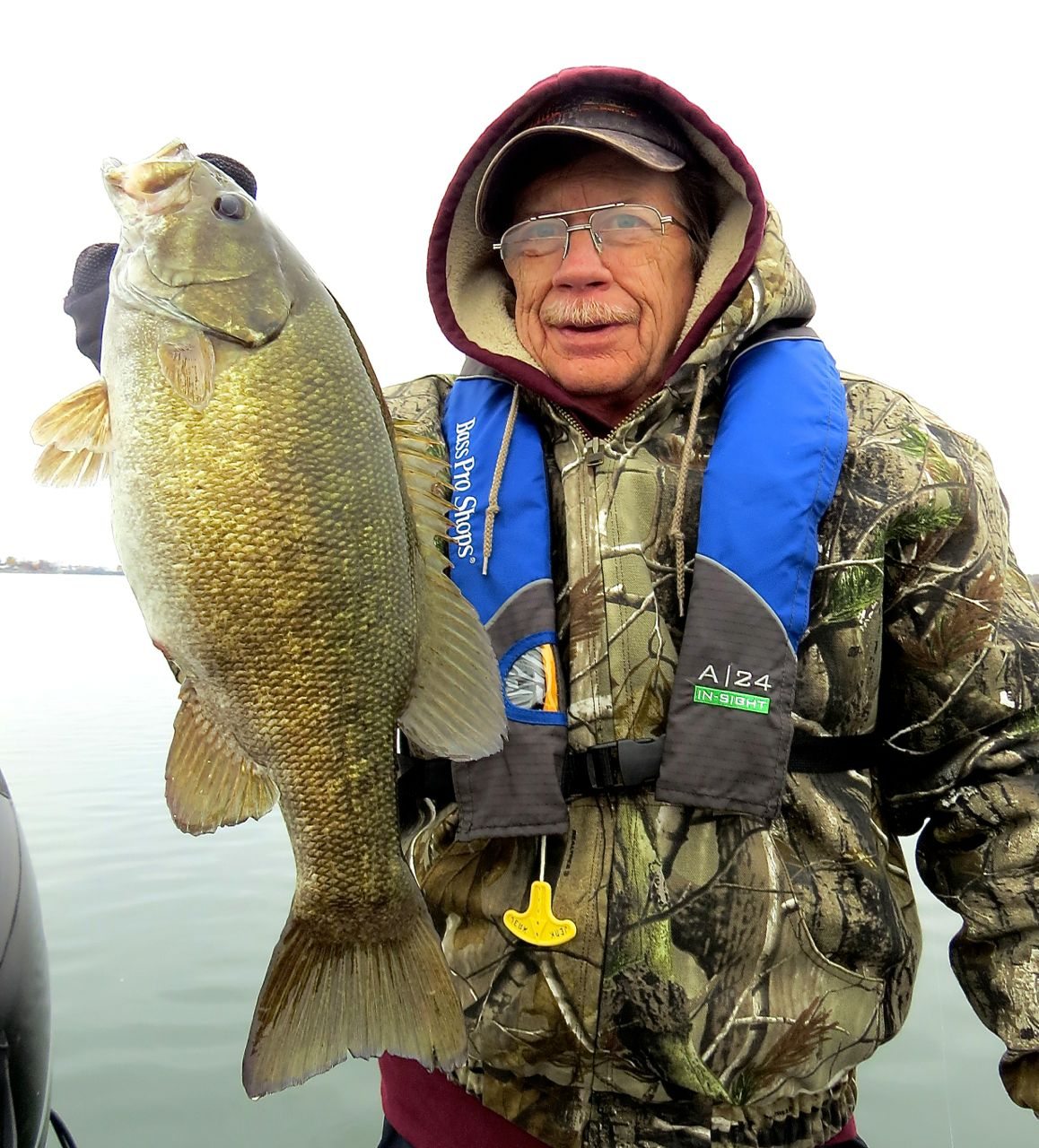 Dean Myhre holds a pair of nice walleyes, a double we accomplished while fishing Reetz Lake near Webster, S. D.

“Well, that’s a start,” I said as Dean slide the hook from the fish’s mouth, lifted him up by the lip and turned it from side to side admiring the bronze battler. Then over the side the fish went.

We had fished this same spot about a week earlier last year and cashed in on some great late fall smallmouth action. Our intent was to do the same this year, and that’s exactly how it worked out.

We were on Reetz Lake, a small body of water, 864-acres to be exact, just a few miles south of Webster. The lake is managed as a trophy walleye fishery. All walleyes must be released, although you can keep one trophy over 28 inches. As in many of the northeast lakes, smallies have a slot limit of 14 to 18 inches. You can have one over 18 inches, the rest of your five fish limit must measure under 14.

We only spent a couple hours each day for two days here and never took a smallmouth under 16 inches.

Let’s take a look of why this late fall fishing is so effective for smallmouth bass. Once water temperature drops in to the 50s these bass begin to put on the food bag. They seem to sense that they need to put on weight to sustain themselves and their eggs though the cold water, winter period. They also seem to group up a lot more than summer fish, and I’m not sure why. Must be instinct.

They can be caught then as well, although your tactics will have to change a bit. They are very vulnerable at this time.

There are lots of ways to catch smallmouth bass in the fall, but I am partial to live bait. I know bass purists will wince at this, but that’s how I learned years ago on West Lake Okoboji and Big Spirit Lake. Nothing beats a chub on a live bait rig at this time. Nothing.

I prefer a seven foot medium or medium heavy rod, spinning or casting. I spool it with 14-pound-test Fireline,. I use a Lindy No-Snagg slip sinker, usually 3/8- or 1/2-ounce, hanging on a Quick Change weight snap, next is a plastic bead (I prefer red) and then a swivel. The weight snap allows me to change sizes of sinkers or even switch to a bottom bouncer which is even more snag resistant in boulders. The bead protects the knot. The leader is 12-pound fluorocarbon mono 40-inches long. At the end of which I snell a Mustad LO42 hook size 4.

This is a wide gap, laser sharp, kirbed bait hook which is designed to fish plastics. It has a straight eye, but I usually take a pair of pliers and bend the eye up so I can attach the hook with a snell knot. This is a very good, economical hook that seldom misses a hook-up, even with big chubs. A size 2 might work better if your chubs are bigger than about 5 inches.

When a fish strikes, you will feel a strong tap, drop the rod tip back to throw some slack into the line and then slowly tighten up. When you feel the fish, set the hook. This usually results in a lip-hooked fish. If the fish does swallow the hook, snip the line as far down into its mouth as you can get and release it. The hook will eventually disintegrate and the fish will be fine.

We only had a couple of hours to fish that afternoon, but it was enough. It was fast fishing, but we spent more time trying to get back on the spot after the wind had blown us off every time we caught a fish.

As much as I like Reetz, there’s another lake I like even more for smallies. That would be nearby Enemy Swim, or better known by local anglers as Empty Swim. Like I’ve often said about South Dakota, if it isn’t a walleye it isn’t a fish. I was told by a couple of lakefront owners that after the slot limit was placed on smallmouth the walleye disappeared. Hence, Empty Swim.

They blamed the burgeoning smallie population. I doubt that a lot, but bass, both largemouth and smallmouth really like this lake.

I only know of two late fall hotspots here and in one of them, the bass weren’t home. But they sure were on the other. Again, we had a tough time holding on the spot but when I could hit the slot one of us would have a fish.

We each landed our biggest bass of the trip here. 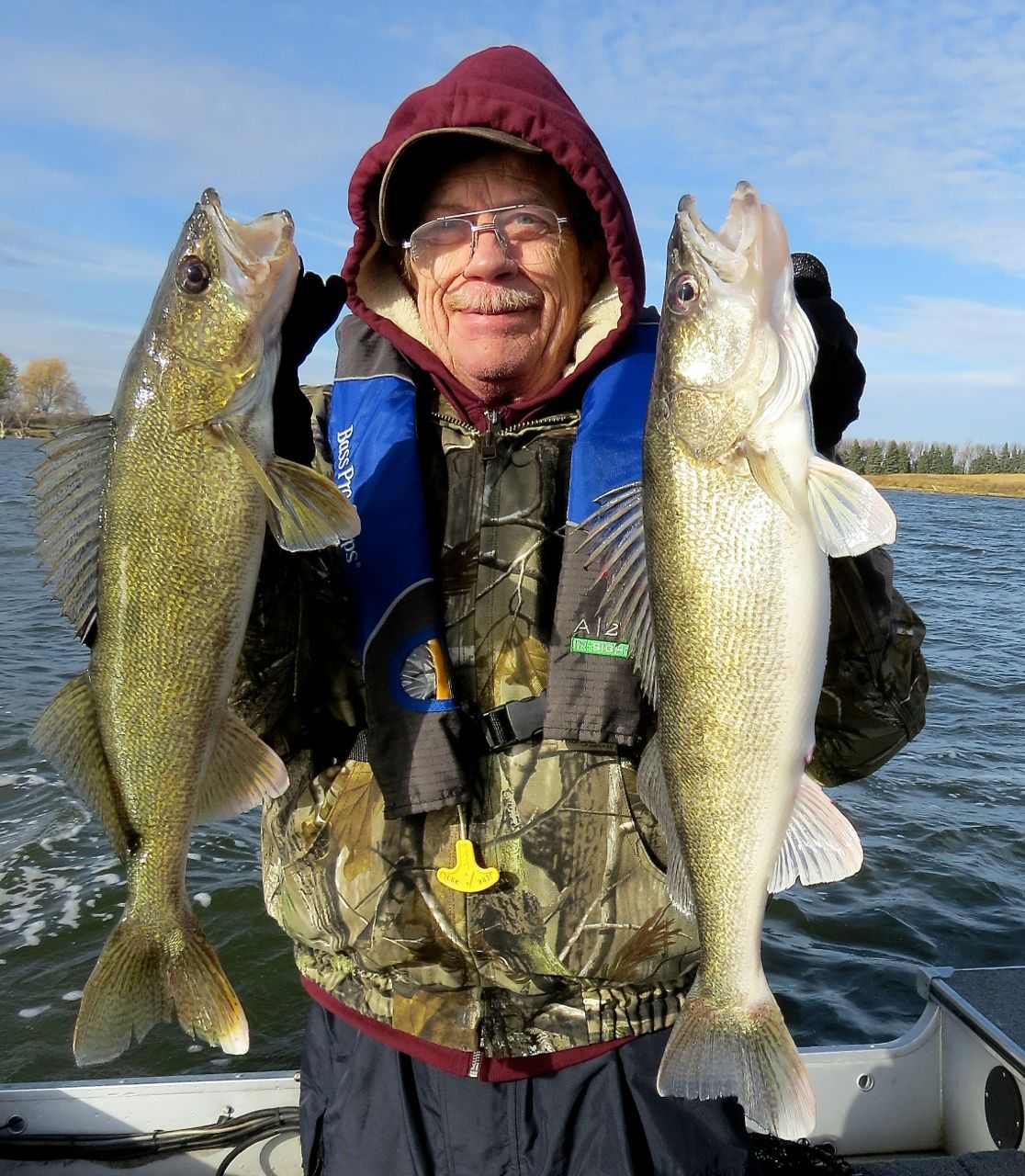 Dean Myhre holds a pair of nice walleyes, a double we accomplished while fishing Reetz Lake near Webster, S. D

The next morning we only had a few chubs left and the local bait shop was out of them. So we decided to use up our last chubs on Reetz. The fishing was even better than two days earlier. The bass bite was really on. And then I caught a walleye. A 22-incher. Then Dean and I doubled on walleyes, a 21 and a 26. Then two more walleyes. We were down to just two chubs. Mine was long dead, but I had caught a walleye on it and Dean’s was making feeble swimming motions, but the bloom was off. No walleyes, no bass.

“Those darn walleyes moved in and ran off our bass,” I told Dean.

So I cranked up the big motor and headed in.

That’s my story and I’m sticking to it.

← Prev: The Poinsett Experience, A Proud Community, excellent Fishing, honoring Veterans and making Friends By Gary Howey Next: Ready for Next Season By Gary Howey →