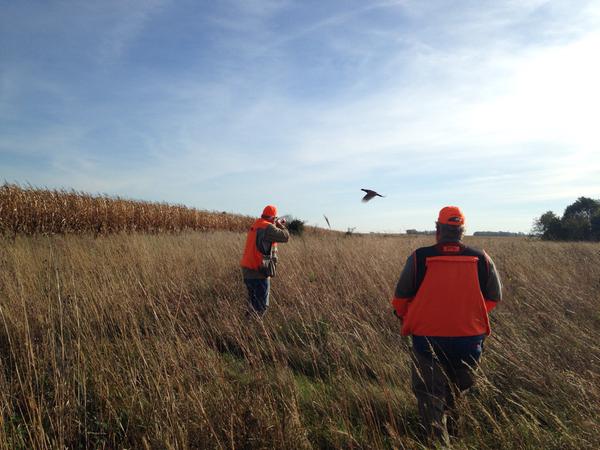 The fall colors were just beginning to pop as we made our way down into the Minnesota River Valley outside of Mankato, Minnesota. The sun was reflecting off the brightly colored leaves, with the reds of the Sumac, along with the red orange and yellows of the Maples looked like one of Terry Redlin’s paintings. The valley was lit up with the fall colors and there would be more to come as it was early October and Mother Nature had not yet finished the painting of the trees along the hillside and river valley.

It was pheasant hunting season in the upper Midwest with Team Outdoorsmen Adventures member Larry Myhre and I heading to Mankato for the Minnesota Governor’s Pheasant Hunting Opener.

Since I had made several trips to the Mankato area in the past, filming and hunting for waterfowl and archery deer, I knew the area held good numbers of wildlife and having an opportunity to return to the area to sample their pheasant hunting was something I just could not pass up.

This would be a two-day event, starting with a 1:00 o’clock tour Friday of Minneopa State Park and its bison herd, followed by a Swam Lake tour, Swan Lake is a large property spanning 10,000 acres, one of the largest prairie potholes in the contiguous United States. Followed by an opportunity to shoot trap and a trap shooting demonstration by Julia Giefer, 2013 Miss Nicollet, a college student and outstanding shooter.

Friday night at the banquet at the Verizon Wireless Center, over a splendid meal, we had an opportunity to meet some of the fine folks from the Mankato area who helped to put this event together. There we were informed as to what team we would be hunting with; Larry would be hunting with Team 12 while I would be on Team 7.

Over breakfast the following morning, we met with our landowners and fellow hunters. Our Hunter Hosts would be landowners John, Paul and Richard Fitzsimmons and the hunters on our team, which included Senator Tim Walz, his brother Craig, two of the senator’s aides Peder Kjeseth and Randolph Briley, Pat Rivers MN. DNR, Mark Remme, and Jack Zimmerman.

The Senator and his brother made the trip to the field with me, during the ride, I was surprised to find out he was originally from Nebraska and had relatives in my hometown Hartington as well as having common friends in the Valentine area.

Upon our arrival to a large CRP field with heavy grass, brush and trees surrounded by un-harvested corn, our plan was made as to how to approach it. Because of its size and the number of hunters in our group, it needed to be hunted on two passes.

As we made our way into the field, the heavy dew was obvious; pheasants are not fans of heavy dew or getting wet, so they have a tendency to move from wet grass early to drier areas, which could mean, many of the birds may have already made their way into the un-picked cornfields.

Fearing I might lose what was left of my hearing, I decided to wear my earplugs, hoping to protect it, not thinking the earplugs would also make it tough for me to hear the other hunters or the sound of a rooster flushing.

Fifty yards into the walk, a rooster erupted from the cover to my right, but by the time, I heard one of the other hunters yell rooster, the bird had made its escape.

Hearing loss or not, out came the earplugs and when the next bird blew from the cover, I brought my gun up, firing at the bird which was well out of range, but, it was one of those deals, I was going to get some shooting, no matter what.
Making the turn at the end of the first push, those of us on the inside of the field slowed allowing our wingman to swing wide along the shelterbelt and to cover the edge along the un-harvested cornfield.

We would swing into a low spot in the field and, if I learned one thing from hunting hundreds of fields for pheasants, anytime you come across a depression in a field, one out of the wind, you should be ready, as upland game birds love these sheltered areas, especially those with good cover.

Just a few feet into it, out in front, well out of range a flock of birds, ten to fifteen birds erupted in front of us. I was tempted to take a shot, but by the time I had my shotgun shouldered, they had safely made it into the unpicked corn. For early season birds, these birds were spooky, so getting close enough to get a shot would be the toughest part of this hunt.

As our line straightened out, our wingmen, the Senator with his aides worked along edge of the field, just into our seconded pass that was when a rooster made the last mistake of its life getting up in front of the Senator. In one fluid motion, he shouldered his shotgun, swung on the bird, dropping it in one shot. The rest of the push was uneventful and with one bird in hand, we loaded up and made our way to our second field.

It would be one with be short-grass, including a slough along the bottom center of the field. Before heading into it, Fitzsimmons, indicated there was one well-educated rooster here as he had encountered it several times, one of those wise old birds.

With this information in hand, our group spread out to make one last pass before the O.A.Vee Wildlife Memorial Wildlife Management Area dedication at noon. I was positioned on the wing on the high ground while the Senator would work along the low ground along the slough.

Shortly after beginning our push, a rooster erupted down below, grabbing air, pumping hard, attempting to put distance from the black Lab that had forced it from the thick cover. Once again, another Minnesota pheasant made a mistake, coming up in front of the Senator, and as before, his shotgun came up quickly putting the bird down just a few wing beats from where the dog had first flushed it.

We encountered no birds as we made awe made our way back to our trucks, we reminisced about the hunting, beautiful weather and fall colors.

Approaching our vehicles, guns slung over our shoulders with most unloaded, a thunderous cackle or a laugh was heard as a long tailed beautifully colored “wise old rooster” broke from the cover, flew right over us off into the cornfield.

What a great way to end a hunt, with new friends, laughing amongst ourselves, and the memories of another successful Minnesota Governor’s Pheasant Opener.

If you would like more information on Mankato and all the area has to offer, check out these web sites www.visitmankatomn.com and www.mngpho2015.com.