The bobber rig on the end of my line was about to reach the boat, when a dark shadow, a huge muskie rose up from the depths, paying little attention to my 1/16 ounce jig and leech as it slid by my lure and into the cabbage weed in the deep water.

It was a “BIG” fish one that appeared to be at least 36 inches long, not a giant on this lake, but one any angler would love to tangle with.

Our guide Joe Scegura indicated the waters around Alexandria, MN. offer some of the best opportunities for anglers to catch a trophy muskie with one exceeding 50″ not uncommon.

We had headed north on Tuesday, Team Outdoorsmen Adventures member Larry Myhre, Sioux City, IA, videographer Garrett Heikes, Wayne, NE. and as we worked our way up, Larry who had fished these waters before, clued us in on what we might expect. The fish found there, the lakes he’ fished and of course all the big fish he had taken there.

Within a short drive of Alexandria you’ll find more lakes than you could count, most having excellent fish populations.

The main structure on the lakes would be cabbage weed as well as some rocks, with good visibility down to twelve feet or more; these lakes hold walleyes, muskie, crappies, pumpkin seed panfish as well as northern pike.

We’d be fishing with Joe Scegura, jsguideservice.com a, lunching from the east shoreline and as Joe headed up to park the truck and boat trailer, we spotted several species of fish working in and around the dock, a good indicator as to the number of fish found in the lake.

Joe who had been on the water the previous day showed us some photos of the fish his groups had taken from this lake using slip bobber rigs.

Slip-bobbers are unlike the standard bobbers that snap to the line as they have a hollow stem going through the bobber, with your line running through that stem, allowing the bobber to slide on your line.

Slip bobber rigs are a simple set up, we used a small 1/16 ounce jig tipped with leeches or minnows, with the size of the jig you use can be smaller, use one you’re comfortable with, a clear leader leading to a swivel. It’s tied to the main line; Berkley Fireline, a small bead, Thill slip bobber slid up the line and a bobber stop attached to the line, which is generally, a small knot that slides through the guides on your rod.

The weather reports weren’t very good, with thunder storms predicted that afternoon, so we were anxious to get on the water, and as we motored across the lake, Joe kept a close eye on the locators.

As bad weather approaches, fish seem to sense them ahead of time and have a tendency to feed heavily before the storm, and because of this, we should be looking for some great fishing. 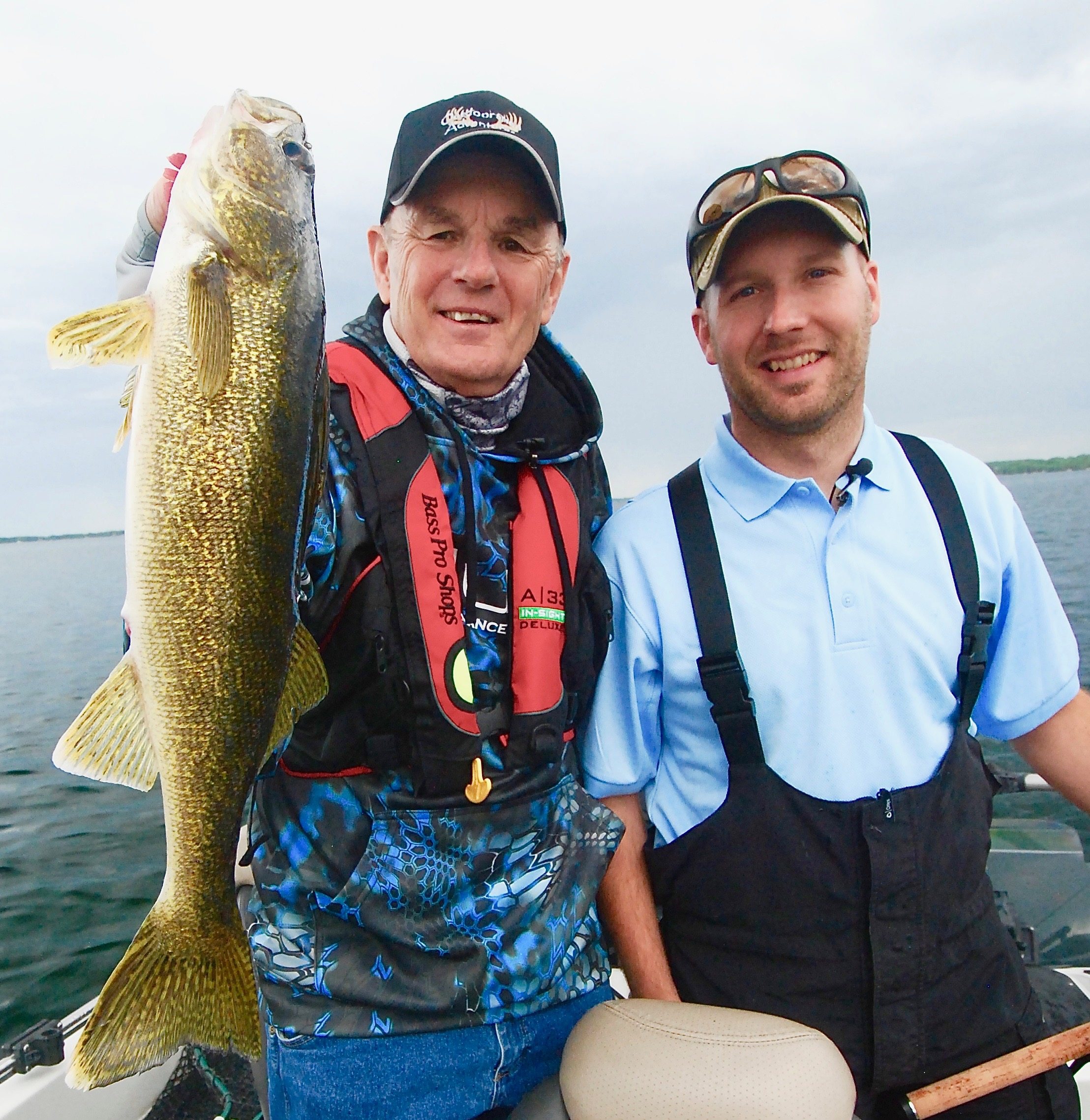 Author Gary Howey with guide Joe Scegura with one of the numerous walleyes took using slip bobber rigs while fishing the one of the many lakes in and around Alexandria. MN.

I fired my slip bobber rig towards the outside edge of the weeds, my bobber hit the water, came to rest against the bobber stop, stood up, wiggled a bit then darted to the side before disappearing underwater as the fish attempted to dive deep into the cover of the cabbage weed bed.

Reeling up the slack, I felt the additional weight on the line; rearing back setting the hook hard, and if the way the fish was fighting, was an indicator, it appeared to be a good fish.

As the fish came close to the boat, it let us know it wasn’t ready to give up the fight, peeling off several yards of line as it dove back under the boat.

Gaining on the fish, I worked it towards the net, where Joe scooped up the nice 21 ½-inch walleye, one of the many fish we’d land on this trip.

The weather we were facing, overcast skies and slight wind cutting the light penetration, allowed the fish to move shallow to feed, with the wave action allowing us to float our rigs into the wed line ,as Joe held the boat well away from the water we were fishing with his bow mount.

Moving from one location to another, looking for the big fish, we were working the weed bed openings, when Larry’s slip bobber disappeared, he set the hook connecting with another decent walleye. While this was happening, Joe fought a fish up front, as I was fighting one at the back of the boat, our first of numerous doubles and triples we had on that day.

A light shower moved in and didn’t last long, just long enough to force us to don our rain gear. The shower passed with the storm clouds moving away, with the sun coming out, which slowed our walleye action. In several hours, wed landed numerous walleyes with the two largest a 24 ½” and a 20″ fish.

As the sun moved higher in the sky we moved to different part of the lake to fish shallower water hoping to find some crappies.

Garrett was the first to spot the huge schools of minnows using the area and then the crappies and other predator fish lying in ambush in the weeds.

If you can spot the fish, they surely can see you, so fishing clear water required that you position the boat out and away from the fish, making long casts in front of where they’re located and let the wind drift your rig to them.  There were all kinds of fish in this part of the lake as we landed crappies, other panfish, walleyes, both large and smallmouth bass, as well as northern pike in the short period of time we fished that area.

We called it early, as we needed to do some filming at the Arrowwood as well as some sights in Alexandria as well as to pack for the return trip the following morning.

As we headed back, Joe had mentioned to and Garrett that there was a good smallmouth lake not far from where they were and they decided to do a late afternoon- early evening smallmouth bass excursion to another lake. Even though the wind picked up, they were able to boat several big smallmouths with the largest in the 20″ range.

We caught all of our fish, numerous species in a short period of time with Joe putting us on the right spot, with the right rigs.

The Alexandria, MN, area offers Multi Species, Multi Lakes & Mega Opportunities for both open and hard water fishing, visiting and vacationing and is an area all of us plan to return to in the near future.

More information on all that the Alexandria, MN has to offer is available at explorealex.com.