Muzzleloaders The old and the new! By Gary Howey

December is just around the corner and for those of us who enjoy hunting, have another opportunity to hunt deer, this time using with our muzzleloaders.

Muzzleloader permits in Nebraska, are unlimited, and purchased on-line or from Nebraska permit vendors.

The muzzleloading season in the Cornhusker state opens shortly after the close of our rifle deer season, opening on December 1st running through December 31st.

In Nebraska, muzzleloader hunters have the opportunity to tag a buck, as Nebraska muzzleloader permits are either sex permits.

In years past, scopes weren’t allowed when hunting with a muzzleloader.

This changed later when scopes up to one-power were allowed on muzzleloaders, which to some hunters was worse than using iron sights.

Later that regulation changed as all scopes now being legal on muzzleloaders.

In South Dakota, permits for muzzleloaders are also unlimited. The South Dakota muzzleloader season has three permits, the any deer, doe and the two doe permits with the season’s opening the same as Nebraska, opening on December 1st and continuing through December 31st.

These primitive weapons, muzzleloaders have come a long way since the days of Daniel Boone and Davey Crockett, with the design, and ammunition changing a lot over the years. 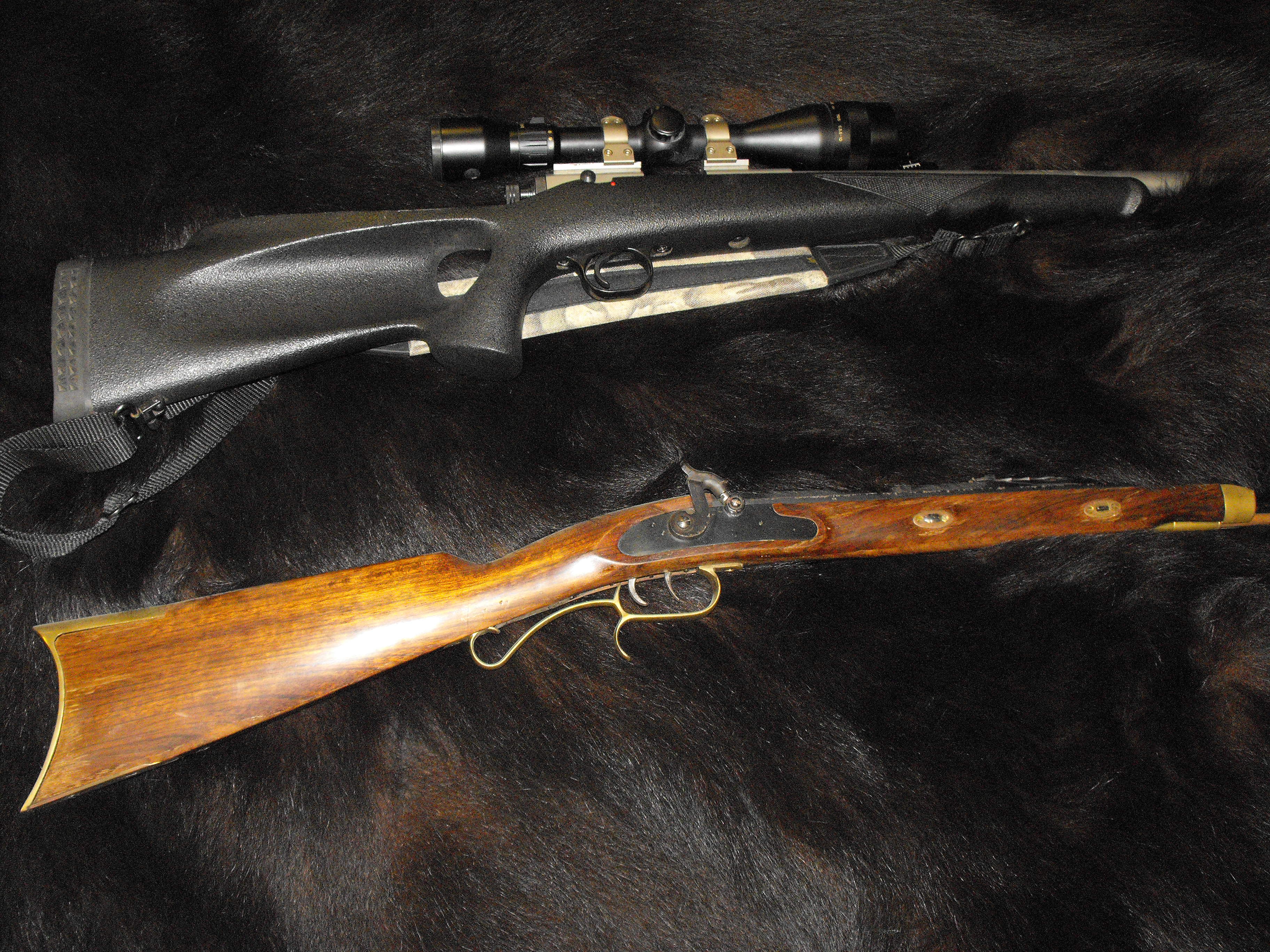 Muzzleloaders way back when came in several calibers, the old squirrel rifles were .36 and 40 caliber, with the larger .68 caliber muskets that were used in warfare.

Original muzzleloaders were matchlocks: wheellocks or flintlocks. Frontiersmen armed with one of these were excellent shots as they were accurate weapons for their time.

Since they loaded, one shot at a time through the muzzle, they were called muzzleloaders.

The loose powder, cloth patch and bullet were loaded into the weapon and fired with the help of a match or flint.

They were very primitive, but very deadly in the hands of frontiersmen, the military and the Indians.

Muzzleloaders and the equipment used in them have gone through numerous changes since their inception.

Today, the most popular caliber flintlocks and caplocks guns are the .50, and .54 along with a few .58 caliber rifles used by those who are into primitive hunting.

The modern muzzleloaders of today for to elk would use .50 caliber rifle or larger.

Those hunting deer with muzzleloaders have found the .50 and .45 calibers work very well for not only deer, but also other small game.

The first of the “modern” muzzleloader had rifled barrels but still used loose powder as a propellant with the ignition system using musket caps, which worked quite well when they didn’t misfire.

The next change made to the ignition system, was going to percussion caps to ignite the powder. This was supposed to help eliminate the misfire, but there were still problems with misfires.

This problem was solved when they started using the hotter 209-shotgun primers to ignite the powder charge, eliminating the majority of the misfires.

Another problem with the using loose powder was that it didn’t burn clean and fouled the rifling in the barrel, which greatly affected the accuracy of the weapon.

In order to assure accuracy, muzzleloaders using loose powder needed to be cleaned more often than other weapons.

Hunters also had to contend the age-old problem of keeping their powder dry as it had a tendency to absorb moisture.

This problem was solved with the invention of the Pyrodex pellets. These solid pre-measured pellets were less apt to absorb moisture and also let the hunter to load more quickly.

Triple Seven pellets would be the next improvement; these pre-measured pellets burnt cleaner, giving hunters better accuracy between cleaning.

Bullets have also improved over the years with the old round ball and patch being replaced by conical bullets, and the saboted bullets.

The conical bullets allowed the shooter to use a projectile weighing more than two times that of the round ball in the same caliber rifle, giving them greater energy levels and better knockdown power.

Then, it was the saboted bullets, a very accurate bullet encased in a heat resistant space age plastic, when fired easily compressed into the grooves of the rifle, which followed the rifling, spinning as it travels down the barrel.

When the sabot leaves the barrel, it falls away allowing the spinning bullet to travel to its target effectively.

With each improvement, the rifle became easier to load and more accurate at greater distances.

Today’s modern muzzloaders are extremely accurate to 100 yards, allowing hunters to make longer more accurate shots, giving hunters another opportunity to get out and enjoy the outdoors.

With the tremendous number of deer we now have, hunters using muzzleloaders have become another important part of wildlife management.