As a kid growing up in N.E. South Dakota, my friends and I would pursue what we thought was big game that inhabited the thickets and woodlot along the Sioux River, the Wily Wabbit.

With my Daisy BB guns in hand, off we would go, heading down the River out towards Lake Pelican.

It did not matter much what type of rabbit it was, we were just after rabbits, it could have been a black-tailed or white-tailed jackrabbit or a cottontail, and we just wanted to say that we had bagged a rabbit.

We knew there were many rabbits around as we had seen their tracks in the snow, so it was only a matter of time before we came across one.

Well, after numerous trips we had yet to see anything but tracks, pure frustration brought our Great Rabbit Hunt Expedition to an abrupt halt.

Like many things that one tries that do not always work out, rabbit hunting became something that I was willing to forget about, to bury deep in my subconscious hoping to forget all of my failures as a rabbit hunter

Several years later Shorty, a friend of my Dad, Cal who worked with him at Sanders/Sharpe Chevrolet asked if my brother A.J. and I would like to go along and do some rabbit hunting.

My first thoughts were, “Nope, Been there, Tried that, Did not need it” until he mentioned that we would be hunting them with Beagles.

Once I heard that, I was all ears, sounded like a good deal to me; I could not wait, when it got close to going, my bags were packed, I was ready!

That Sunday, after church, my brother and I waited not so patiently for Shorty to pick us up, man, we were ready!

When he arrived, he looked at our BB gun and asked what we were going to do with them, I thought, Duh, were going to shoot rabbits.

He shook his head, loaded us into the car with a couple of tiny little dogs, dogs that were not much bigger than some of the rabbits we had heard about, since we had never really seen a real live rabbit only their tracks in the snow.

Well away, we went out into the country into an area that was covered up with plum thickets, brush piles and all sorts’ nasty vines with sharp thorns.

Since I was the oldest, Shorty gave me the option of taking turns with my brother shooting our BB gun or using his 22.

Once again, I had to think this over, well any way for at least one mila-second and then there I was, the big brother with the 22, man, I had made it, I was into the big time. 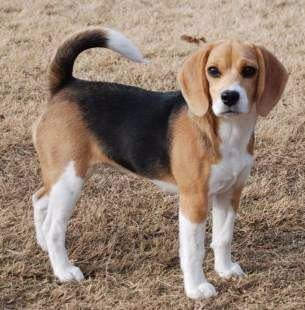 Beagles are not a large breed of dogs, but put one in the field and once they scent a rabbit, there off with their short little legs moving as quickly as they can carry them. The baying of these little dogs when in pursuit of a rabbit, sound like that of a much larger dog! (Submitted Photo)

Neither, my brother or I knew one darn a thing about these little dogs we were hunting with, but it did not take us long to learn because in a heartbeat these two mini mutts started bawling like a coon-hound and with their nose to the ground, they were off in hot pursuit.

At first A.J. and I sort of ran around like couple of goofs with their heads cut off, until we finally figured out that the dogs would run the rabbits by us.  All we needed to do was wait and eventually, one of those bunnies would circle back and make the mistake of stopping long enough for us to get a shot.

To us, a couple of young kids, we thought this was real gentleman’s sport, this was cool, no strenuous exercise, just a lot of standing around until the little short legged dogs, the beagles would run a bunny right to you.

That was years ago and I had pretty much forgotten about how much fun hunting rabbits was until a friend of mine from Lincoln asked if we’d like to  film a bunny hunt with him.

Once again it Did not take me long to decide, because I knew that these guys were bunny hunting fanatics, running all over in pursuit of the wily cottontail.

He and his friend Jeff Wild had several good rabbit dogs and knew of some tremendous areas where there were many bunnies running around.

The only thing different from my first hunt years ago was that we were using 4:10 shotguns instead of 22’s, as many of our shots would be made on bunnies on the run.

Well it did not take long before one of Dick’s dogs let out a bawl and they were off and running.

I stood by one brush pile while Dick and Jeff posted on the outside edge along the bunny trails that wound in and out of the thickets and brush piles.

Those tiny little dogs, with those short little legs, went around and around in and out of the thickets on the hot trail of the bunnies until they forced them to run by one of our hunters, giving us a shot.

On that day, we managed to take five bunnies, and then the best part happened we headed back to town where Jeff’s Mom would fry us up some rabbit, make up some gravy and that along with some potatoes was a grand way to top off a dandy Gentlemen’s bunny hunt.

I have been bunnies several times since that hunt, and I am planning to do it again as bunny hunting, especially with beagles gets in your blood and you just have to go back for more.

Rabbits are excellent eating and in Nebraska, you will find liberal limits of seven cottontails per day and a possession limit of twenty-eight.

In South Dakota, the limits on cottontails are even more liberal as you can take home ten a day and have thirty in your possession, so there is a lot of shooting as well as excellent eating. In both Nebraska and South Dakota, the seasons run from September 1-February 28, 2018.

Rabbits are an underutilized wildlife species and hunting them is another excellent way for us to get out and spend some time in the outdoors when many of the other seasons have closed.

Once you have heard the baying of a beagle and had one or two bunnies go by you, you too will be obsessed with hunting those RASCALLY “WABBITS”.