I know it is hard to believe, but its December and the time of the year when people really start to think seriously about ice fishing.

As soon as Thanksgiving is over, the phones in our office goes wild with people wondering where the ice is good enough to go ice fishing and where the fish are biting.

Well this year, the ice particularly on the larger bodies of water in our area has not gotten solid enough to support an ice angler and his gear.

Some of the smaller dams have a little ice, but I for one would wait for colder weather before venturing out onto them!

With the warmer temperatures that we have had over the last several weeks, even though our nighttime temperatures were below freezing there has not been enough consistent cold to make good ice.

However, with the heavy winds that we have had, it is tough to make good ice because the wind keeps the water moving making it hard for good ice to form.

By Christmas Day, the winter weather will be here, with its colder temperatures, so it will not be long before the entire Midwest has plenty of ice.

You will want to be careful if the body of water you are fishing has snow covering the ice, “Take Care” as it is impossible for good ice to form below the snow as the snow acts as an insulator, and will not allow the cold temperatures to get down and freeze the ground or the water underneath it?

Even though the ice on the body of water looks like it is solid or be solid along the shoreline where the snow has blown clear, there are probably areas on the lake that have very little ice because of the snow that insulated the water that lies underneath from the cold temperatures needed to freeze t solid.

You want to make sure, before you make your way out onto the ice fish that you are aware of the potential dangers of ice. 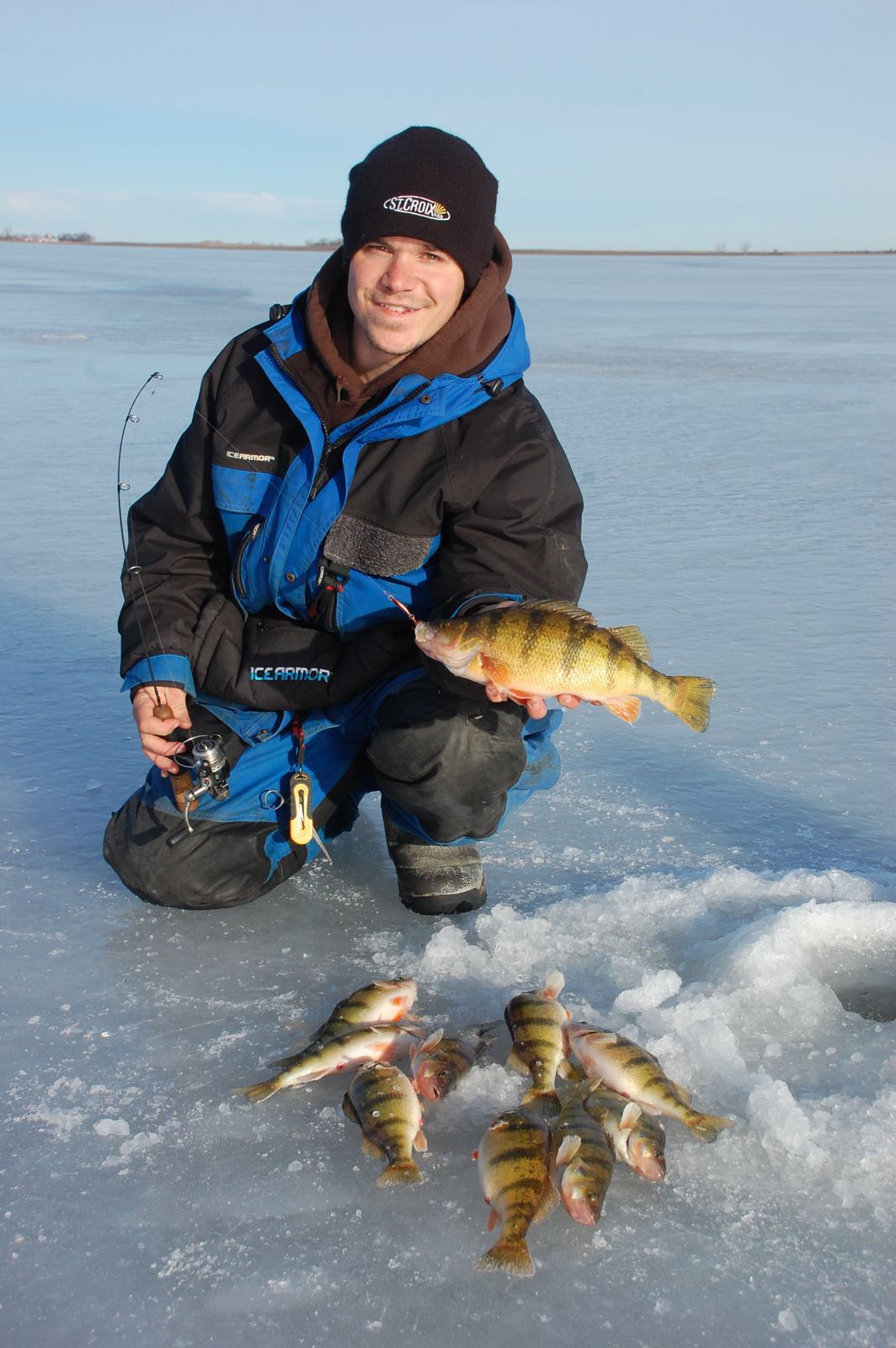 Early ice fishing can be excellent, especially if you have good thick, clear blue ice, as this ice was when Team Outdoorsmen Adventures Member Cory Ewing, Webster, S.D. was fishing on one of the Glacial Lakes in N.E. South Dakota.

The color of the ice is a good indicator of the strength of the ice.  Clear blue ice is the best, this is appears when temperatures are below freezing for an extended period.

The poorest ice, that should not have foot traffic on it, is ice that looks black, gray or honeycombed as it developed when the water froze, then thawed and then freezes again doing this repeatedly.

The dark color is an indicator of open water, poor ice, or possibly a spring, all of which are dangerous.

As I mentioned earlier in this article, snow cover insulates the ice, inhibiting solid ice formation and making it almost impossible to judge the thickness of the ice that lies underneath it.

Any type of structure on the ice, especially those that are dark colored such as icehouses, fishing piers and bridges are something you should be careful around as they absorb the sun’s heat and increases the melting causing the ice along the edge of these to be weak or even have some open water.

If there is vegetation on the body of water, it will also absorb heat from the sun and this rotting vegetation can create its own heat. If you are fishing with a large group of anglers, or drive larger vehicles out onto the ice, stay off these areas; avoiding those areas with dark ice.

When you have moving water, it can weaken the ice by at least 15% and when there is a wind, it creates a pumping action that will force water through the breaks and cracks enlarging them, making them bigger in a short period.

If you are crossing the ice on foot, and not sure of its thickness, slide your feet instead of stepping, as this helps to distribute your weight more evenly.

It is not a bad idea to carry an ice chisel, as this allows you to check the thickness of the ice as you work your way across the ice.

When I am on the ice, I carry along a set of ice picks that available at your local bait shop or fishing tackle dealer. If you have a few basic tools, they are very easy to make!  You start by attaching a couple of large nails in to a piece of large dowel or a short piece of broom handle and then attach the two together with a cord.  You will want to sharpen the points of the nails with a file or grinder, making them extra sharp so that they will easily penetrate into the ice.

Because they are sharp, it’s not a bad idea to drill an extra hole in each dowel to insert the opposite nail or spike into, to keep from jabbing yourself with it

You hang the cord around your neck and if you should happen to fall through the ice can be jabbed into the ice to pull you out of the water.

Once you are back on the ice, you will want to roll away from the hole, getting as far away from the open water as possible before trying to get back up. This will help you get onto the thicker safer ice.

Here are a couple of general rules when it comes to just how much clear-blue ice formed under ideal conditions will it take to support you and your equipment safely.

(If its early winter when the ice has just froze over, I like to have twice as much ice than listed below before getting onto the ice).

If you someone your with falls through the ice, you will want to “Reach Throw, Go.”

Early Ice fishing can be very productive and a lot of fun, but venturing out onto the ice to early may lead to a disaster, so do not rush to get out there.

We at Outdoorsmen Productions would like to wish all of you  a Happy New Year!