The Grand Lady of the Rangeley streamer flies By Larry Myhre

As a student of fishing my entire life, it has not escaped me that so many of the pivotal aspects of this sport can be credited to women.

For instance, the first-ever published work on fly fishing was included in a 1496 edition of the “Book of St. Albans.” It is entitled Treatise of Fishing with an Angle and was written by Dame Juliana Berners, a noblewoman and prioress of the Sopwell Nunnery near St. Albans, England.

She preceded by 150 years what may just be the most popular of all fishing books, “The Complete Angler” by Izaak Walton.

Her writings were detailed and visionary. Perhaps I will delve into that in a future column, but for now my attention is captivated by another woman.

That would be Carrie G. Stevens, originator of the Rangeley Favorite trout and salmon flies. Her fly tying career spanned more than 30 years beginning in the 1920s. Her most famous streamer pattern is the Gray Ghost, an imitation of the smelt that swims in the Rangeley Lakes region of Maine.

I first tied the Gray Ghost back in the early 1970s. I included it in a framed set of my flies, which included wets, nymphs, dries and streamers. It hangs on the wall of my fly tying den to this day.

Although I tied many versions of the early Maine streamers in those days, the unique methods that Carrie used to construct her flies escaped me. Yet,        the beauty of her streamers, most tied on 8x- and 10x-long hooks, has haunted me over the years.

For the past several months, I have researched, through books and online sources, the story of Carrie Stevens and her special streamers. It has been an interesting and educational trip fueled by the desire to tie many of those patterns myself, not for fishing but for personal challenge, display and photography.

That desire is realistically tempered by my fly tying skill. I have tied a lot of these patterns lately, in the hopes I could attain at least a modicum of success. Fly tying is something you never really master, but you attain success by degrees.

In this day of Google and the internet, one might be tempted to think that books are relics of the past with little to enlighten us sophisticates today.

It wasn’t until I read a book written by Graydon R. Hilyard and his son Leslie K. Hilyard entitled “Carrie G. Stevens Maker of Rangeley Favorite Trout and Salmon Flies” that I felt I had really begun to know the story of these famous streamers. Although first published in 2000 by Stackpole Books, it is still available through Amazon.com and other sources. 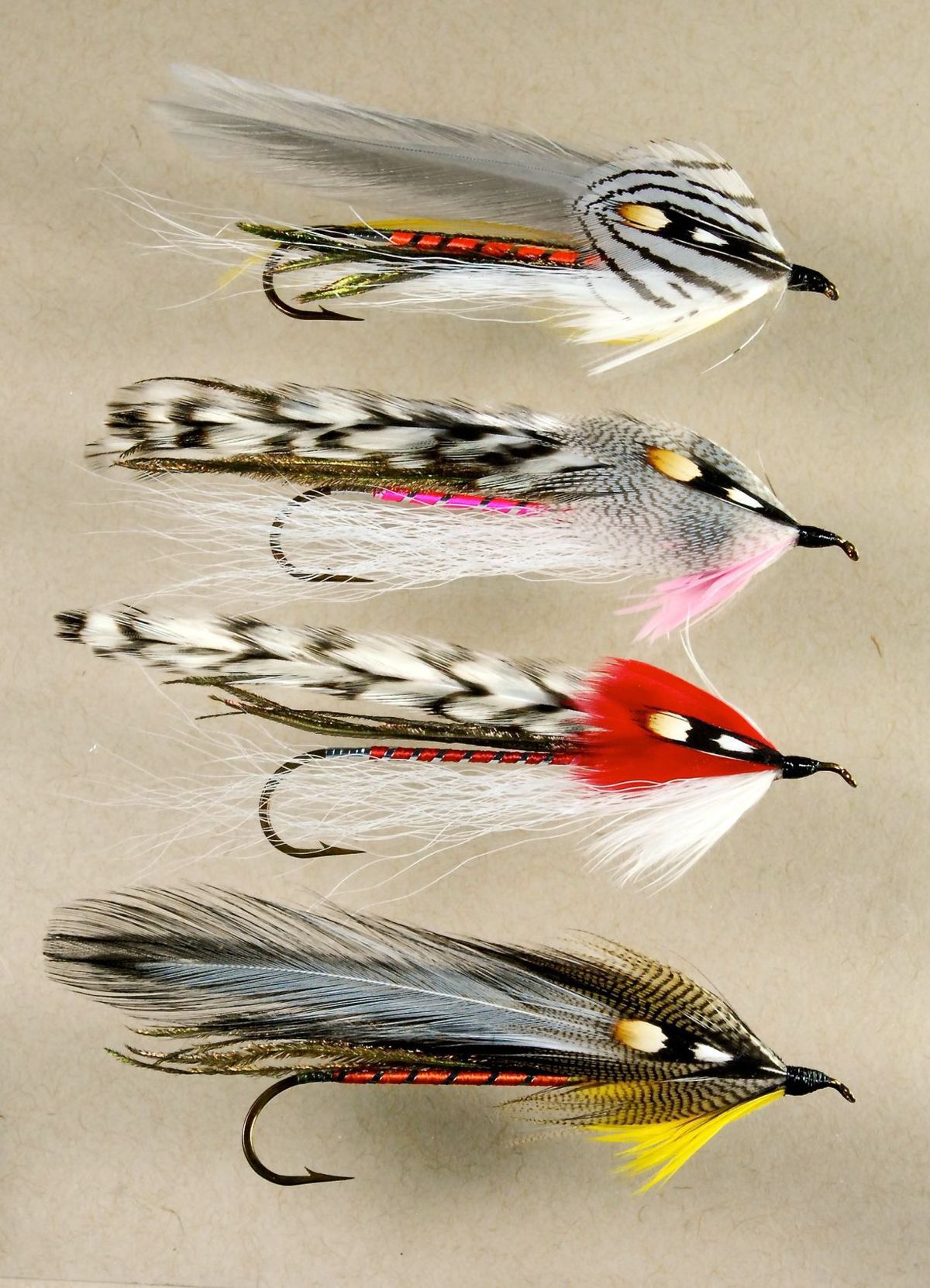 This is an assortment of Carrie Stevens’ streamer patterns. From top, Gray Ghost, Pink Lady, Shang’s Favorite and Larry. (Photo by Larry Myhre)

The book is an invaluable resource and fills a much-needed historical niche. Amply illustrated with color photographs, it includes recipes for nearly 100 of Carrie’s flies, many of them previously unpublished.

Briefly, here is an overview of her life in the Rangeley region. In 1919 she and her husband Wallace moved to Upper Dam, a popular destination for brook trout and landlocked salmon fishermen at the time. Upper Dam sits at the junction of two Rangeley lakes, Mooselookmeguntic and Upper Richardson. At the time, these lakes and others in the region were home to giant brook trout weighing up to 10 pounds

Her husband Wallace became a legendary fishing guide, and his clientele became a logical customer base for Carrie as she began a fly tying career that eventually would take her fame worldwide.

In 1924, she landed a six-pound, 13-ounce brook trout that took second place in a Field and Stream contest. She landed the fish while casting from the apron of the dam, and caught it on a fly she had tied herself. A later story by the magazine gave her national prominence, and her fly tying career began.

Her early flies were not named. They were instead given a number, which was common practice at the time. However, as her business and fame grew, she began to assign names to her patterns. The Gray Ghost was probably originated, as it is tied today, in the 1930s.

An astute marketer, Carrie often named flies after clients of her husband. The classic of these would have to be the Colonel Bates streamer, which I would regard as her second most popular pattern. Robert Bates Jr. was a personal friend. As his rank within the Army grew from captain to colonel, so too, did the name of the fly.

Bates later wrote “Streamer Fly Tying and Fishing” and included 14 of Carrie’s patterns as well as her unorthodox method of tying.

It is a fact that Carrie received no formal instruction on how to tie flies. She had never seen anyone tie a fly. And no one ever saw her tie a fly until the day she sold her business in 1953. Also, she never used a fly tying vise, tying, instead, in her hands.

A milliner by trade, Carrie brought the practice of gluing feathers together into her tying. Her designs were definitely nontypical. Her wings extended only slightly behind the bend of the ultra long-shanked hooks she used. The wings were not tied on top of the hook, which was the practice at the time and still is. She tied them on the sides of the fly, making a more streamlined and baitfish silhouette. The long hackle feathers she used as wings were accentuated by a “cheek” of another short, broad feather, such as the body feather from the silver pheasant used in the Gray Ghost. Over the cheek was a feather from the Jungle Cock which served as an eye.

Her streamers usually consisted of an underbody of bucktail or goat hair, a thin body of floss or tinsel or both, rarely a tail of hackle fibers. Four to six stands of peacock herl were often found as part of the underbody or part of the wing. Golden pheasant crest feathers often adorned parts of the fly.            Her wings consisted of at least two saddle hackles, glued together with a cheek of pheasant, wood duck or another natural or dyed feather over which was glued a jungle cock nail. A second set of feathers composed the other side of the wing.

It is said that Carrie designed over 100 different streamer patterns and sold them to sports which frequented the Rangeley lakes region during the years she lived there. Her streamers were also sold in most of the fly shops in the Rangeley region, but the greater bulk of her business was mail order. And she had customers from around the world. It is a fact that many of her steamers were designed to catch the fisherman and not necessarily the fish. She encouraged customers to contribute to patterns through feather and color choice. She was, indeed, a shrewd marketer.

She also incorporated a kind of trademark to further identify her flies. She tied a band of contrasting thread over the head of each of her streamers; typically that would be a black thread head with a narrow band of red thread over it.

Most modern tiers do not include the band of thread over the head, considering it a personal signature of Carrie’s. Another consideration that only a few modern tiers have picked up on is that Carrie wrapped her silver tinsel ribbing toward the tier rather than away from the tier, which is the accepted method today.

The Rangeley lakes of Maine continue to be a destination of fly fishermen, but management mistakes of the past have robbed the lakes of their huge brook trout. It began with the first fishing laws of the state in 1869 when no protection was given to a small trout whose numbers seemed uncountable at the time, the blueback trout. During spawning runs the bluebacks congested the creeks with squirming masses of trout measuring from six to nine inches and were harvested without regard to be salted and eaten much as mackerel. The blueback was the main forage source for the brook trout.

By the early 1890s the bluebacks were gone. A second mistake was made in 1875 with introduction of landlocked salmon. The brook trout became the main forage base for the salmon and by the time smelt were introduced in 1881, as a forage base, the damage had been done. The brook trout fishery began a slow decline all the way into the mid-1940s, at which time the catch of both brook trout and salmon declined to the point that traditional resorts in the region closed their doors.

By that time, age and poor health had sent Carrie closer to doctors and civilization, and Wallace soon abandoned his guiding business and joined her. In 1953 she tied her last fly, a Pink Lady. She died in 1970.

← Prev: Learning from the Outdoors By Gary Howey Next: Going Back to Prehistoric Times, In Search of the Paddlefish By Gary Howey →