Learning from the Outdoors By Gary Howey

I’ve been serious outdoorsmen for over 40 years, each time I go out, I learn a lot from my trips to the field as well as those on the water.

When I first got into the outdoors, I did it because I thought it would be a great way to get away from it all, those little problems, molehills that I’d blown way out of proportion, making them seem like huge mountains.

I’m sure that some people just think that hunters and anglers do what they do because they enjoy eating what they harvest.

To a certain extent that’s true, but too many, like myself, it’s more than that!

I’ve learned from spending time in the outdoors is that there are some people I truly enjoy hunting and fishing with.

While others, I’d never want to spend time with because of some of the things they do and their complete disrespect for the game & fish they’re after.

It seems that some people don’t understand why we have limits, while others are down right dangerous when you put a gun in their hand or put them behind the steering wheel in a boat.

One question that continually comes up at my seminars and personal appearances is why we release so many fish on our television show.  I’m sure that some people believe it’s because we’re fishing all the time and our freezers are probably full of fish.

Nothing could be further from the truth; we release them because we’ve learned in order to have fish to catch on the next trip, we need to release some of them today.

If we release some of the fish, especially the larger ones, it will allow those fish, the breeders to reproduce another year and there will be more down the road for us to catch.

Perhaps that fish we release today will be an even bigger trophy the next time we catch it.

It’s pretty simply; fish don’t reproduce or get any bigger once they’re in the freezer! 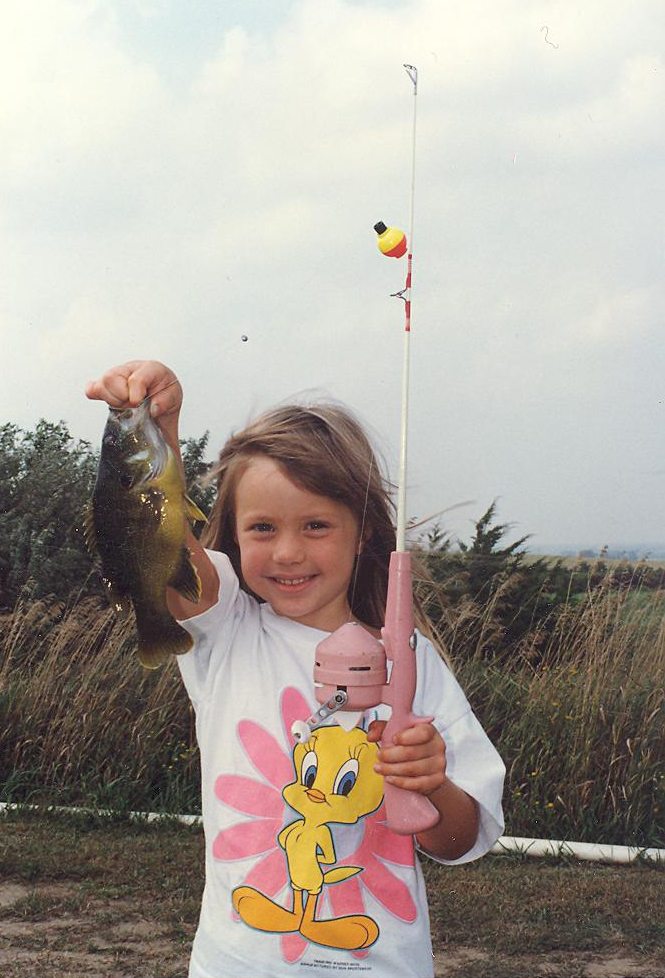 Authors youngest daughter, Cassie, when she was a little tyke with one of the many fish she’s taken while spending time in the outdoors with her Dad.

Since there is no catch and release when it comes to hunting, we’ve learned there are times when we should let the animals walk by and simply enjoy the experience.

By letting a small deer pass this year, he might end up being a real trophy in the next year or two.

I can get as much enjoyment out of watching wildlife in their natural setting as I do hunting them.

The outdoors has also taught me that sometimes life isn’t fair!

As in real life, just because you do everything right, that doesn’t mean things, will work out the way you planned and the way you want them to!

In the outdoors, so many variables enter into the picture can and will screw up even your best-laid plans.

The big factor of course is the weather.  If the weathers too nice, waterfowl have a tendency to stack up north and not migrate through until the cold weather forces them south.

You may have done all your homework and have everything ready, but it isn’t going to happen if the ducks and geese aren’t flying. It just isn’t fair, is it!

The same goes for almost every type of hunting including deer hunting!  We all know about the time the deer go into the Rut, but if it’s too warm, the bucks will do less chasing then they would if it was colder.

Cold fronts, wind, rain and snow can also mess up the best fishing and hunting trips and since we live in the Midwest, we get more than our share of bad weather.

I’ve also learned that the outdoors can bring you back to reality, help you to forget about work and other things that can make life a lot less enjoyable.

It’s amazing when I’m out hunting and fishing how well I sleep, not even thinking about the things that I worried about, those things that kept me awake at night when I was at home.

The truly big thing I’ve learned from the outdoors is patience!  If you want to be an outdoorsmen or women and don’t have patience, it’s going to be a tough one.

When I first got into the outdoors, I had trouble setting in one spot long enough for any critter to walk by me; I was always on the move.

After many uneventful fishing and hunting trips, I learned patience because with out it, you’ll run by more fish than you catch and spook more game than you see or bag.

It’s amazing what a little bit of fresh air; wildlife and beautiful scenery can do for you.

In addition, the best thing about it is that it doesn’t have to cost you an arm & leg, all you need to do is to get in your car and drive to the river or simply take a ride along a country road.

I could go on and on talking about all that, the outdoors has taught me and all it has to offer.   However, it’s best that you go out and find out about it on your own, because it will make your next trip into the outdoors much more enjoyable!
Take a minute to enjoy all the great things that the outdoors has to offer, it will be a true awakening.

I triedto introduce my children to the outdoors and have enjoyed the time I spent with them fishing and hunting. My youngest daughter Cassie pictured in the photo when she was a little tyke reminds me that when we fish together she usually catches the biggest fish. (Gary Howey Photo)

END_OF_DOCUMENT_TOKEN_TO_BE_REPLACED

As a youngster, growing up in South Dakota, I was fortunate to have some adults that took the time, to share their love of the outdoors with me. In...

END_OF_DOCUMENT_TOKEN_TO_BE_REPLACED

Springtime is when Mother Nature's really shines, when her wild garden starts to appear. Unlike other gardeners, Mother...