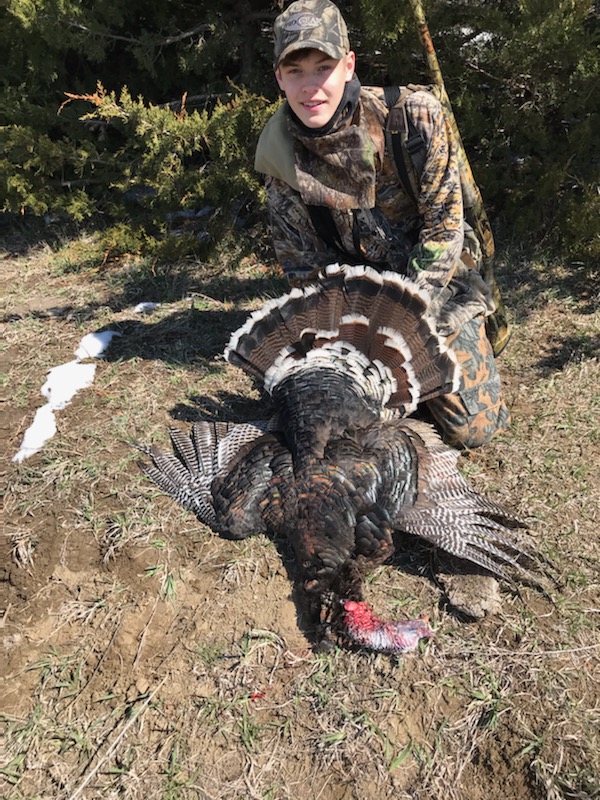 Growing up in Northeastern South Dakota, in Watertown, as a youth, my hunting consisted of going after both tree and ground squirrels, but as I got older it was walking and retrieving pheasants on hunts with my Dad.

After relocating to Nebraska, my time spent in the field, hunting grew as I hunted deer, upland game and turkeys’ a species I spent endless springs pursuing, as well as introducing others to the sport.

On this spring Nebraska youth turkey hunt, the terrain we’d hunt turkeys, had changed tremendously, as the location the turkeys were using for their roost, was now barren except for a several trees along the lane going into the place.

There was also another grove of trees to the southwest where an old house and a grove that had been leveled, so the locations the birds were using had changed significantly.

There were still numerous places for the birds to call home, but the change in the areas they’d previously used, changed their mood, they were nervous, spooky and it didn’t take much to send them running off over the hill.

You’d spook the birds at over a quarter mile by simply slowing down your vehicle, sending them off to locations unknown.

From a distance, not to spook the birds, we used our binoculars, to scout prior to the 2020 Nebraska youth spring turkey season, attempting to zero in on the flock of turkeys using the area.

With one shot, he was successful, filling his first tag with a mature hen, one that would grace their table during Thanksgiving.

Our Nebraska youth season opens a week prior to the regular season, giving youth under the age of sixteen, to be in the field, hunting prior to the opener.

Dayton had attended our late summer 2018 Hunter’s Safety course, passing with flying colors and since I was one of the instructors, we went through some safety concerns prior to  the hunt as well as how to  become successful on a spring hunt.

Several of the roads we’d used to scout were minimum maintenance, so the least amount of moisture would eliminate getting close to several of these areas, making them only accessible via a half mile hike.

While scouting later in the day, we’d spotted some birds near one of the areas we had permission to hunt, so we made note of it and continued to down the road to our next location.

Stopping at one of the places that had given us permission to hunt, I introduced Dayton to the landowner, checking with him to see if the birds which used to roost down the road had moved to his place, he indicated that they passed through from time to time, but didn’t spend much time there.

The sun was getting low in the western sky as we stopped at another place, as before, I introduced Dayton to the landowner and he indicated that the birds were roosting on his place and was happy to give Dayton an opportunity shoot his first  spring gobbler.

As we chatted, Dayton noticed a turkey in the shelter-belt near the house, then another and finally the entire flock as they winged their way up into the roost trees.

There was no doubt where we’d be hunting on the opener of the youth season and as we made our way from the place, a mature gobbler came across the road and as we slowed down, he was off to the races, beating feet, heading for the nearest cover.

As the sun was rising in the east, we were on our way to see if a gobbler would answer my calls as there had to be some lonesome gobbler out there that was tired of getting his tail feathers pummeled by the dominant tom and would be more than happy to help out a lonesome hen.

We set up in a field surrounded by cedar trees as we’d heard gobbles from there earlier when we were scouting.

Prior to setting up, we saw a big gobbler and decided to spend a little time trying to coax him into gun range, he gobbled a few times and then got lock jaw, as he’d probably spotted our movement and after

an hour, if a bird was around, we should have seen or at least heard it, we decided to move to another location to try our luck at spotting and stalking.

We spotted several big gobblers with their harem in another field that weren’t too far from a brush pile that we thought we might have an opportunity to call the satellite gobbler, the one that traveled with the boss gobbler, hoping to get an opportunity to sneak one of the hens off were the gobbler wouldn’t  see them. That bird was coming up behind the gobbler who was following his harem.

I worked both of the birds, where they strutted and gobbled, but knew where they were going and would not be deterred.

Back on the road, using our binoculars we located another gobbler and his harem, and heading for a group of trees we could hunt.

Once again, the gobblers wouldn’t answer and the only thing left in our bag of tricks was to do a spot and stalk.

Working along the edge of the trees on the high side of the bank, we cautiously worked to the  field below where the birds were feeding and after twenty minutes, only saw the tails of the birds as they made their way west.

After another attempt, that didn’t work out, we decided we had enough excitement for the day and headed back home.

The following morning, I decided because it seemed as if the birds were so spooky, that it might work better if we tried a little later in the morning.

As we drove up along the heavy cedar belt, we laid out our plan, where we’d set up the blind and my Dakota Decoys.

Attempting to cross a fence covered up by cedar branches while carrying two decoys, a blind, two turkey fans and a shotgun is not an easy or a quiet task.

Because of we were totally camouflaged and had a background of green cedars, we were lucky not to be seen as we staked out my blind and then low crawled out in front to set up the decoys.

We sat quietly letting things settle down and before I did any calling, Dayton and I discussed what needed to be accomplished before we got started, getting the shotgun resting on his knee and being ready to bring it up over the netting for the shot, keeping movement to a minimum and to take the bird once it had come up the hill to a point where a small cedar stump was sticking out of the ground.

My plan was to start calling using my diaphragm, with a soft quiet call, just to see if i could get a response, nothing, so I switched to my “Roost” Em slate and immediately had a response.

I worked the slate quietly, purring ever so gently as we both scanned the three groups of cedars in the field.

There were several gobbles and it sounded as if the bird or birds was getting closer, out came one gobbler, then two, three and four along with several hens as they burst out of the cover charged out of the trees, saw our decoys and headed up the hill.

I whispered quietly to Dayton here they come and he best get ready as, the four gobblers; all Jakes came dashing up towards our blind.

Quickly and quietly I mentioned to him to take the bird he wanted at the stump, he said “which one, my reply, whichever one you want.

Before he had the opportunity to get the shotgun, loaded with Hornady Heavy Magnum 6 turkey loads, up over the screen, three of the birds were past the cedar stump where I’d thought he’d have a good shot.

Two of the birds circled my Jake decoy while two others held off below and to the right, waiting to see what the other two Jakes would do.

Jakes, generally don’t mess with another gobbler unless there’s several of them together, then they feel there’s strength in numbers and get cocky.

I coached him to bring the shotgun up and take a bird as I could see they were getting nervous, staring at this strutting gobbler that was mute.

As I watched the birds mingle around, the twelve gauge went off, with a beautiful Merriam Jake went down for the count.

To me, it was just as exciting having Dayton tag a bird as it would have been for me to do it and after a high five fist bump, we went out to claim Dayton’s prize.

Everything had gone perfect, well maybe a little too perfect as I would have sure liked to have Dayton see a tom strut and gobble from the bottom of the hill.

After tagging the bird and a few photos, we backtracked to the truck, loaded all of our gear up and took off for town, stopping just long enough to call in our Subway order we’d pick up when we got there.

Then we drove to the house to show Dayton’s Mom his trophy, then to my shop to clean, pluck the bird, which was quite a challenge with the wind blowing into us as turkey feathers filled the sky, on us and the bench we were working from, as we did our best to get them into a large garbage bag.

This was not only a great trip for Dayton as he tagged his second turkey on a beautiful Spring day, it was another time that I brought a youth into the outdoors to not only enjoy this hunt, but if I’m correct many more hunts in the future.

If you have an opportunity to introduce a youth to the outdoors, do it, as it’s an enlightening experience and a memory that will last you a lifetime.

Gary Howey, a graduate of Watertown, S.D. High School, now residing in Hartington, Neb. is a former tournament angler, fishing & hunting guide. He’s an award winning writer, producer, and broadcaster who was recently inducted into the “National Freshwater Fishing Hall of Fame” in 2017. He developed and was the Producer- Host of the Outdoorsmen Adventures television series for over 23 years that airs throughout the upper Midwest, the Co-Host of the Outdoor Adventures radio and a syndicated “Of the Outdoors” columnist.  For more outdoor information, check out garyhoweysoutdoors.com, outdoorsmenadventures.com and like Gary Howey’s Facebook page or watch his shows on www.MyOutdoorTV.com.