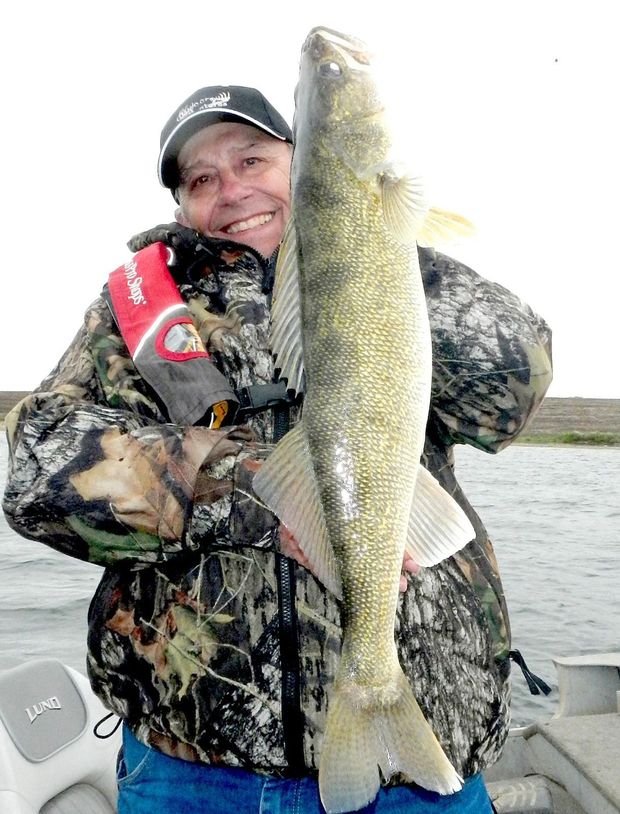 Ever since I was a kid, chasing bullheads and northerns on the Sioux River in my hometown of Watertown, South Dakota, I’ve been hooked on fishing.

Today, when I’m on the water and once I catch a couple of fish on a certain rig, indicating what they’re biting on, I’ll use the bait the fish are looking for, whatever it takes to put them in the boat.

This time of year when I’m after walleye and sauger, I use two different rigs, the one in my hand, I’ll jig with, the other, is my livebait rig used on a dead rod or one that I’m working up and down off the bottom, some sort of livebait rig.

If I get the hits on one or more rig than the other, that’s the rig I’ll go with until the bite dies or I have to relocate, where I’ll start with the two rig system again until something hits.

The key to fishing any bait, if drifting or using your tolling motor, to fish as vertical as possible, this puts you in closer contact with the bottom, where the fish are holding and when you set the hook, you’ve have less line out, allowing you to set the hook quickly.

If the bites coming on my live bait rig, a rig which doesn’t need to be anything fancy, basically it’s a hook, line and sinker, and if fishing that rig in calmer water with less current, it can be as little as a lighter split shot, a small snap and a snell with a single hook, with the length of the snell, depending on where the fish are holding.

When fishing in current, you want to work with the current and if you’re trolling motor won’t allow you to fish straight up and down; you may have to use your kicker along with your trolling motor to stay vertical, in close contact with the bottom and the fish.

More weight can help keep you on the bottom, but adding more weight is also a good way to lose tackle, especially in areas that’s rocky or contains a lot of snags.

Pulling single or double snells, depending if you’re fishing minnows, leeches or crawlers, behind a bouncer works well, with half a crawler out producing a whole crawler as it has action and is dispersing the worms scent.

Pulling spinners, such as the Northland Wingnut Butterfly Super Death rig spinners is another excellent livebait presentation, which can be done using a walking sinker or bottom bouncer.

This is one of those spinner baits where the butterfly spins even at slower speeds, the blades color flashes as it gives off vibration, allowing fish to zero in on your bait.

Another great live bait rig that works well is a slip bobber rig, which works well when you have suspended fish as we did a few years back on Minnesota’s Mille Lacs.

It was so windy and the water so rough, we’re seriously thinking about not going out, but as we were there to film one of our Outdoorsmen Adventures shows we decided to give it a go.

Coming out of the bay, our locator showed a good number of walleyes suspended nine foot off the bottom, with the only way to get at them were to use a slip bobber rig, allowing us to suspend our rigs just above the fish.

The slip bobber rigs we were using consisted of a slip knot, a Dacron knot you use to adjust the depth, using a small Northland Lite-Bite slip bobber, tiny snap, a split shot, just heavy enough to allow your bobber to stand up and a single hook snell baited with large leeches.

We’d position the boat six boat lengths above and off to the right of where the suspended fish were holding, allowing our slip bobber rigs  to drift through the fish just above where they were suspended, with the waves created by the strong winds, giving the rigs the little action they needed.

On each drift, at least one, two and sometimes all three of us caught a fish but as the winds increased, we were drifting to fast, with the gigantic waves, bringing our rigs too far above the fish; the bite came to a screeching halt.

Not to be deterred, we broke out our Boat Brakes, our drift socks, which not only slowed our drift, also allowing us to keep our baits at the correct depth.

We finished the morning, using only slip bobber rigs with a Great Outdoorsmen Adventures show and a three man limit of walleyes ranging from seventeen to nineteen inches, all good eaters!

Slip bobber rigs can also be used from shore, as you probably don’t know the exact depth your fishing; start with your bobber suspends about 3 feet above your bait, going deeper once you have the depth figured out.

Cast the rig, upstream, out along the edge of the current and if possible along a current break, allowing the current to carry your bait  downstream, after a few drifts, adjust the depth, a little at a time as if the fish are there, eventually you should have your bait or slightly above where the fish are holding.

Don’t get in too big of a hurry, as even if the fish aren’t there, the scent and action of your bait should draw them.

As I mentioned above, a current break is anything in the water that forces the current out, a point. docking area or where the water backs upstream, creating an location where the fish don’t have to fight the current, yet they can feed on anything that drifts into the calmer water or dash out into the current, grab a bite and then come back into the calm water to wait for their next meal.

Live bait rigs are what most of us, as kids learned to fish with and they worked back then and will work today, they are a bit more sophisticated than they were when we were younger, but when it comes to catching fish, what could be more real than a livebait rig tipped with a minnow, a part of crawler or a leech.

With the pandemic we’re going through, if you can’t stay at home, go fishing, you may want to wear a mask and keep the required distance between you and your fishing partner as it’s getting to be that time when the waters starting to warm with the fish slowly coming out of their lethargic mood.

No matter what season; spring, summer or fall, I’m always using at least one livebait rig, as they work throughout those seasons.

Gary Howey, a 1968 Watertown graduate, now residing in Hartington, Neb. is a former tournament angler, fishing & hunting guide,  an award winning writer, producer, photographer and broadcaster, a recent inductee into the “National Freshwater Fishing Hall of Fame” in 2017.  He developed and was the Producer- Host of the Outdoorsmen Adventures television series for 23 years. Its new season begins on April 4th with Outdoorsmen Adventures airing throughout the upper Midwest. Howey is the  Co-Host of the Outdoor Adventures radio show and if you are looking for more outdoor information, check out garyhoweysoutdoors.com, outdoorsmenadventures.com and like Gary Howey’s Facebook page, tune into his shows on MIDCO Sports Channel as well as on numerous Independent stations throughout the upper Midwest and watch the shows on www.MyOutdoorTV.com