Now’s is the Time to Prepare for Deer Season! Gary Howey

One of the major mistakes that deer hunters make is to put off their preparation for deer season until just prior to the opener.

Deer spend most of their life within a small area and are used to what they see, day in and day out.

The woods deer live in could be compared to our homes and since we’re in it every day, if something is moved or missing; we’re going to notice it.

It’s the same way in the woods, if there’s a drastic change in their environment, they’re going to notice it and stay clear until they’re certain that it’s not something that’s going to harm them.

Deer and other wildlife have to be cautious, as every large predator in the woods are out to make them into their next meal, so if something changes and they aren’t used to it, they’ll become weary and change their patterns.

This is why it’s a good idea to get ready for this falls deer season as early as possible because, any changes you make now gives the deer time to adjust to them.

This isn’t much of a problem if you hunt out of the same stands year in and year out because those dark objects in the trees (deer stands) have always been there.

However, because deer patterns change, chances are you’re going to have to do some modification no matter how long your stand has been there.

There are several reasons why deer patterns will change, one of these is if the adjacent landowners cropping system changes from corn to bean or from alfalfa to some other crop.

Changes such as these may cause the deer to not use or quit using the same trails that run into these fields; those, that in past years have ran right past your stand.

Another might be that emerging vegetation and new trees down the line from your stand now force the deer to swing wide, farther away from the stand, you hunt out of making it a longer shot or out in an area where you have no shot. 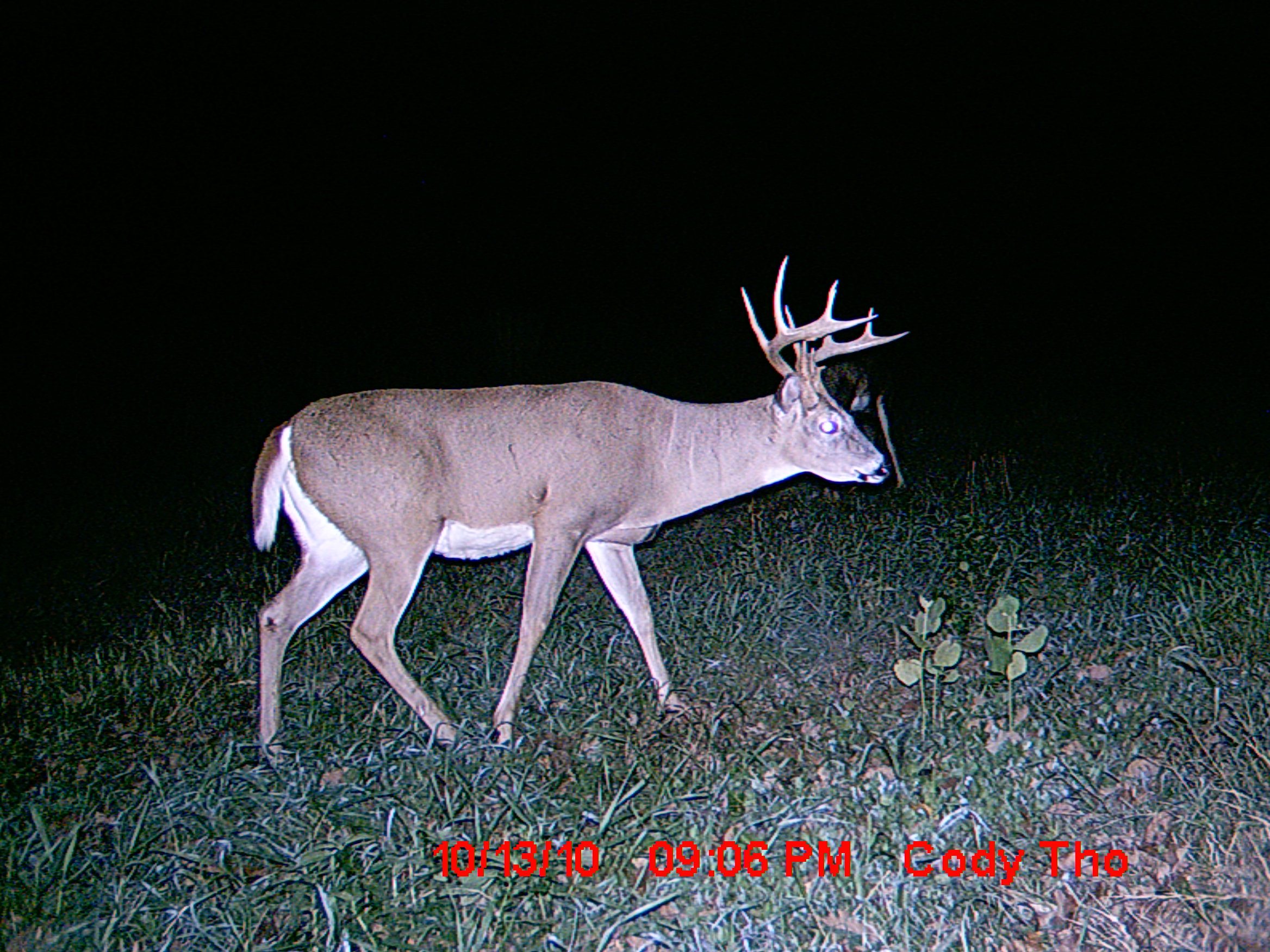 Food plots, planted in the early spring or late summer, with decent, moisture should have good growth and being used by the deer by opening day. (Team Outdoorsmen Adventures Member Cody Thoene Game Camera Footage)

These are just a few of the reasons you should get out early, inspect the area and open up your trails you want the deer to use, blocking those you won’t want them to use allowing you to direct them where you want them to be.

I try to get, as much of my maintenance on my tree stands completed in the spring after turkey season when temperatures are cool.

Unfortunately, it seems like there’s never enough time, so I end up doing some of it during the early morning hours in the summer.

First, I like to open up my trails past the stands, especially in the heavily wooded areas where I hunt.

Many things can change in a year, dead trees may have fallen, blocking the trail, vegetation and smaller trees will shoot up, all of which can block the trail leading to your tree stand.

Since I’m an optimist, I believe that the monster bucks with the huge rack will be the one coming down my trail past my stand, so I widen out the ones that I hunt.  I feel that deer with larger racks are more apt to travel along a trail with more headspace than one that’s tight and bangs against their antlers with every step they take.

You don’t want to open up too many trails or you’ll make it easy for the big bucks to travel wherever they want making it a guessing game as to where you’ll need to put your tree stand.

If I have to relocate or put up a new tree stand or deer house, I make sure it’s done in the spring giving the deer time to get used to it before hunting season opens.

Like all of God’s creatures, deer are creatures of habit, and take the easiest route to and from their feeding and bedding areas.  If I can make that route right by my stand or into my food plot, then that’s what I’m going to do.

I had a couple of places where there were good numbers of deer traveling on neighboring tracts of land, unfortunately these trails had them traveling around my hunting area.

To get them onto and through the area I hunt; I create an area in the fence line where it’s easy for them to cross.  Using mechanics wire or a similar soft wire, I’ll pull the top strand of the barbwire down where their trail comes close to the property I’m hunting, giving the deer easy access into the area.

The lower wire, allowing the deer that had traveled by to cross the fence, creating a well-worn trail from the deer’s bedding area into the area I hunt.

This is not a good idea if there are cattle in the neighbor’s field and before doing it, it’s best to let your neighbor know your plan.

In states where mineral licks and feeders are legal, it’s also a good idea to have these out well in advance of the season, giving deer a reason to spend more time on the land you’re hunting rather than the neighbors. You’ll want to make sure, if it’s legal to hunt close to mineral licks as in many states, stands and deer houses have to be at least two hundred yards away.

Food plots are another reason for wildlife to visit your area; they can be planted in either the spring or fall and are legal to hunt over in most states.

A good food plot is worth its weight in gold, but won’t do you a bit of good, if the deer aren’t traveling near by, so the closer you have a food plot to the deer travel routes the more deer it will attract.

One misnomer when it comes to food plots is that they need to be large, well there’s nothing further from the truth because several smaller deer plots will do you a lot more good than one or two larger ones.

One reason for this is that it’s easier to hunt small food plots, especially for one hunter, as tree stand placement on smaller plots is a lot easier to figure out than a stand on larger plots. Larger plots will also require more stands in order to hunt them affectively.

Also, it’s never too late to put in a food plot.  I plant my Frigid Forage food plots in the spring and the late summer.

With a decent amount of rain, these late summer plantings will produce enough browse before deer season to attract the deer.

Don’t wait too long to prepare for opening day because if you do and have to make many changes in the area, the deer will shy away and you could very well find yourself sitting up in your stand waiting for that deer that may never come!

If you haven’t already gotten out and checked your hunting spot, do it before it’s too late!

← Prev: You will never forget your first boat By Larry MYHRE Next: 5 TIPS FOR BETTER SOIL PREP →