No hunter likes to lose a deer, especially one like the one in this picture and once you’ve made the shot, what next, these tips in this column will give the hunter a better chance of retrieving their deer. (Larry Myhre Photo)

You have done everything according to the book, put out your scouting cameras, know where the deer bed, travel and feed. You’ve did everything to make sure the deer won’t detect you, wearing scent proof camo, Hunter’s Specialties scent wafers on your cap, checked the wind, knowing which of your deer stands will work best in the prevailing wind, in the stand, well before sunup, waiting for that five-by-five buck you’ve dreamed about since last season.

Then, the buck shows up, less than a hundred yards out. You brace yourself take a deep breath, center your crosshairs on the deer’s vitals and fire.

The deer humps up and charges towards the nearest cover, disappearing into the woods out in front of you.

What do you do now, as if the deer gets away it’s a hunter’s worst nightmare, the thought of wounding an animal, trophy or not, and not being able to recover it.

There are a few basic tips to help you to find the deer you have worked so hard tag.

* You’ll need to know where the buck was when you fired the shot. As you take aim at the deer, try to locate some sort of landmark, a tree, or even a rock that will help you to locate the general area once you shoot the deer. Things look a lot different on the ground than they do in the stand, so a landmark on the ground is important.

* Keep an eye on the animal, paying close attention to it after you have made the shot. This is important, even if it falls in its tracks, as it may try to get up and a well-placed second shot could be needed.  If it runs after the shot, watch the path it took to escape as this will give you a starting place to look for signs.

*  After the shot, pay attention to the animal’s body language, signs that, it’s been hit and where it’s hit. Look for things such as a limp, a leg swinging freely, or a tail that is tucked tightly to the deer’s rump.

* This is one of the most important things; you will want to “wait”, I know what you are thinking, it’s hard to do, but it’s very important to wait at least a half-hour or more before climbing down from your stand to look for the animal. Even if the critter dropped in its tracks, you should catch your breath and keep an eye on the animal just in case it gets back up. If you are on your way down from the stand and the deer gets up, you are not going to be able to take the shot. So, it makes sense to hang out in your stand in case the deer gets back up.

* When you climb down, go straight to where the deer was standing when you fired the shot. Look the area over closely for signs such as blood, bone or hair. Do not tromp the area down, as you do not want to destroy any sign that may be there.

*It is a good idea to carry a roll of high visibility tape when you are deer hunting to mark the trail, beginning with the area you first hit the deer and then along the trail where other sign is found, this allows you to back track just in case you lose the deer’s trail. By marking your trail as you follow a blood trail, you will have a visual indicator of the path the deer was taking. In addition, you will not have to worry about messing up a sparse blood trail and then loosing track of where you last saw sign.

* Start picking up the trail, being careful not to walk over the top of the trail, working parallel to it.

* You will want to look for blood on the leaves and twigs and the brush along the trail the deer may have brushed against as it moved past.

* If you find frothy blood it is an indicator of a lung shot and often pink in appearance, with dark blood, indicating a liver shot.

* A wounded deer generally runs downhill instead of uphill, as it is easier on them. If you jump a wounded deer, back off, giving them time to lie back down and die.
* Deer hit in the chest that don’t die immediately, usually feel weak and bed up extremely close to where they were hit. Sometimes not much more than 50 yards away.

* Keep making wider and wider circles as you go until you find the deer. When trailing the animal, there could be times where the sign stops, and you will have to begin looking in circles again. You may have to resort to following the deer’s tracks.

At times, leaves turned over or disturbed may help you figure out what direction the deer went.

* Most importantly, take your time, working slowly keeping from destroying signs you have found.

If you are not finding much sign, see if you can get help from a couple of your friends as several pair of eyes on the ground is better than one.  What you do not want to do is to get too much help out there, as the last thing that you want is a bunch of people tromping around, destroying any sign there may be.

* When you find your deer, if its eyes are open it is dead, If the eye is closed, then shoot it again, do not wait or you will be sorry.

No matter how perfectly you had things planned, how good the shot, these things will happen, these tips will help you to find the deer.

As hunters, we need to do our best to recover wounded animals. You will feel better, and you will not have to worry about the one that got away. 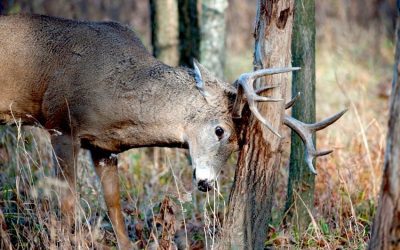