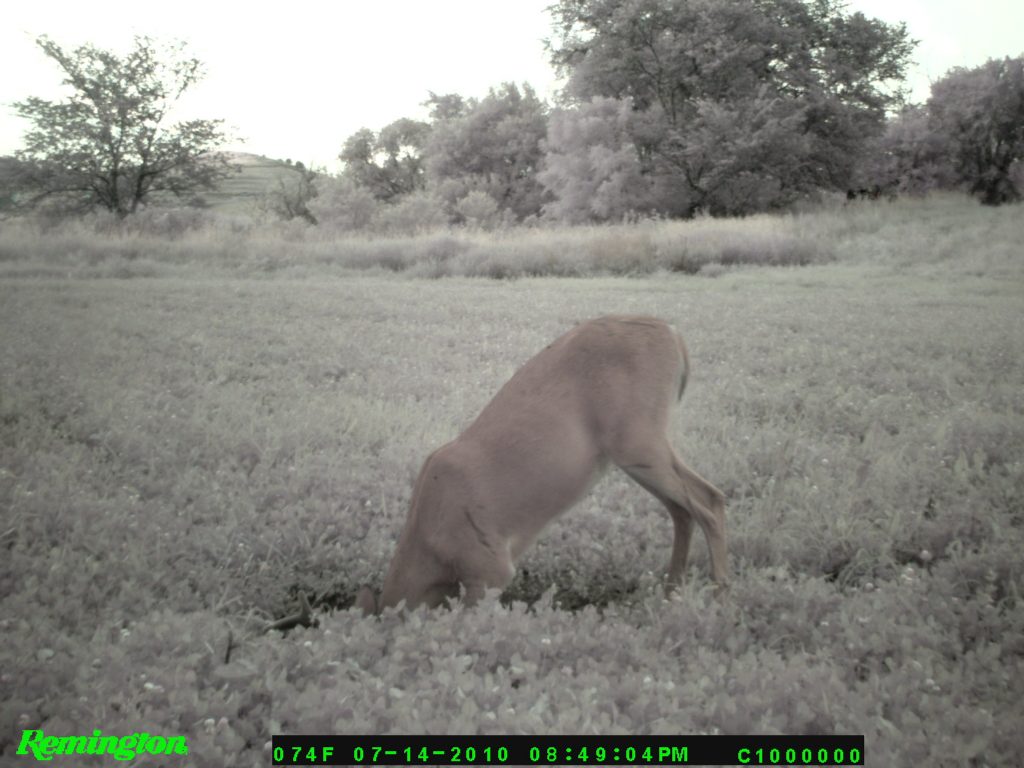 To produce healthy does and larger bucks there are certain minerals that deer need, with some of it coming from the dirt they eat. When not available in the ground, you may need to establish a mineral lick. The photo shows a large buck at my RAKS mineral lick. Once the RAKS on the ground is gone, the deer return to the licks, digging deeper and deeper to get the minerals they need. (gary Howey photo)

Hunters are always looking for ways to make their hunting land more attractive to wild game.

In last weeks column. I talked about some of the things a hunter can do funnel the deer to the location where your hunting blind or deer stand is located.

This week, I’ll talk about several of the things I’ve done on the land I hunt, helping me to

Without adequate habitat, deer won’t hang around very long, it doesn’t matter if you have water and food available, without habitat they won’t be there long.

There are some ways we can make small improvements on the land to attract and keep deer there.

Deer is attracted by vegetation, don’t care for wide open spaces or too heavily woods areas, as it makes it hard for them to get around in.

If there’s enough habitat around where the deer will feel safe from predators which included us.

One of the best ways to attract deer would be by planting a food plot, that may take a little time, but the results of having a food plot are well worth it,  doesn’t have to be huge as every little bit helps.

Placement is very important and as you need to have your food where the deer have it’s accessible to the deer.

As I mentioned in last week’s columns, you’ll want to place a game camera at your food plots and other locations so you know what deer are visiting them.

One of the first things I do when I arrive on the property where I plan on hunting, is to locate their food sources, which can include grass, chestnuts, mushrooms, forbs, beechnut, twigs, alfalfa, apples, acorns, (with deer preferring white acorns, but when times are tough, they’ll eat any acorn kind of acorns) but, bark (willow, oak, and red cedar), hickory, clover leaves, oats, staghorn sumac, and dirt

Why do deer eat dirt, because of nutrient’s they need, to recharge mineral deficit, needing the minerals calcium and phosphorous in large amounts to support antler growth.

This is where mineral licks work very well and if the deer need certain minerals in a lick, they’ll hit It hard, I have one of my Raks mineral licks with game camera photos showing a buck down to its front legs in a hole its head and rack down in the hole the deer created, getting the minerals their body needs to create healthy does and bigger bucks.

In some of the land I hunted, there were plenty of standing trees, with very little brush that a deer could bed in in.

I solved this problem by partially cutting a live tree down two thirds of the way through, with one side that’s still connected to the tree, I’ll pull it over, with the bark that’s left on one side, which is still feeding the tree, which means every year the tree will bush out, creating an excellent hiding place for deer.

Deer like all animals, humans included, are opportunists and take the easier route going from their bedding area out to feed.

Follow the deer trails to see where the deer jumps the fence and continued on that trail away from the property.

Where it crossed the fence may has some deer hair on the top wire, making them easy to locate.

If you own the land or have permission, this is an easy way to direct the way the deer is heading, allowing the deer to get over the fence very easily.

What I do on this type of fence crossing is to pull the top two wires, using wire, to pull the fence down, allowing the deer to cross easily.

Once you’ve lowered the top wires, I generally use the trees and brush I’d cut to open up the trail and block it, causing the deer to follow the trail I made, directing them in the direction of my deer houses and stands.

Then I redirected to the trail to one of my numerous Raks mineral sights, directing the deer in the direction of my mineral licks.

You’ll want to have game cameras on these locations, allowing you to see what type of deer are visiting them.

In some areas I hunted, there was so much brush and volunteer trees, it was tough to get through it, and if I had a tough time, how’s a heavily antlered buck going to make it through, and this is when I grab my branch cutters and chain saw to open things up as well as blocking the trail where I don’t want the deer to travel.

When trees are close together, no sunlight gets down to the ground, this is when you need to remove trees to provide the seeds forbs and plants on the ground with sunlight, allowing new forbs and other plants to grow.

Much of the items I mentioned above, not only deer, they act as a magnet, drawing all species of wildlife, which includes, turkey, upland game birds, rabbits as well as others.

The things I mentioned in this week’s column are just a few of things you can do to create, attract and hold deer on your land.

Gary Howey, originally from Watertown, S.D., now residing in Hartington, Neb., is a former tournament angler, fishing & hunting guide and an award- winning writer, producer, photographer and broadcaster and in 2017, was inducted into the “National Freshwater Fishing Hall of Fame.”

Howey developed and was the Producer-Host for 23 years of his award winning gary Howey’s Outdoorsmen Adventures television series and the Host of the award-winning Outdoor Adventures radio program carried on Classic Hits 106.3, ESPN Sports Radio 1570 in Southeastern South Dakota, KWYR Country 93 AM and Magic 93 FM in Central South Dakota, As well as on KCHE 92.1 FM in Northwest Iowa.  If you’re looking for more outdoor information, check out www.GaryHowey’soutdoors.com , and www.outdoorsmenadventures.com, with more information on these Facebook pages, Gary Howey, Gary E Howey, Outdoor Adventure Radio.