We have hunted pheasants hundreds of times in numerous states as well as at the Top Gun Hunting Ranch near Howard, South Dakota but have never have the opportunity to hunt on a more memorable hunt.

As we drove into the lodge, we were met by several vehicles park along the fence, their license plates indicating they traveled from Minnesota, Arizona, Louisiana, Florida and of course South Dakota to be part of this hunt.

The fourth annual Doug Brown Memorial Paralyzed Veterans of America Pheasant Hunt, is a memorial to Brown who served for years as the Veterans Benefits Representative at the Sioux Falls, South Dakota VA.

The Sioux Falls office of the North Central Chapter of the Paralyzed Veterans of America put together the hunt, bringing in ten P.V.A. members for this hunt held at the Top Gun Hunting Ranch.

After a hearty breakfast, nine of the hunters in wheel chairs, with the help of the volunteers used a special trailer to lift them into the back of nine pickups, while another P.V.A. member would be hunting from a tracked wheelchair.

Temperatures were ideal for this time of the year, warm enough to be comfortable yet cool enough where the hunters would not need to be dressed too heavily. 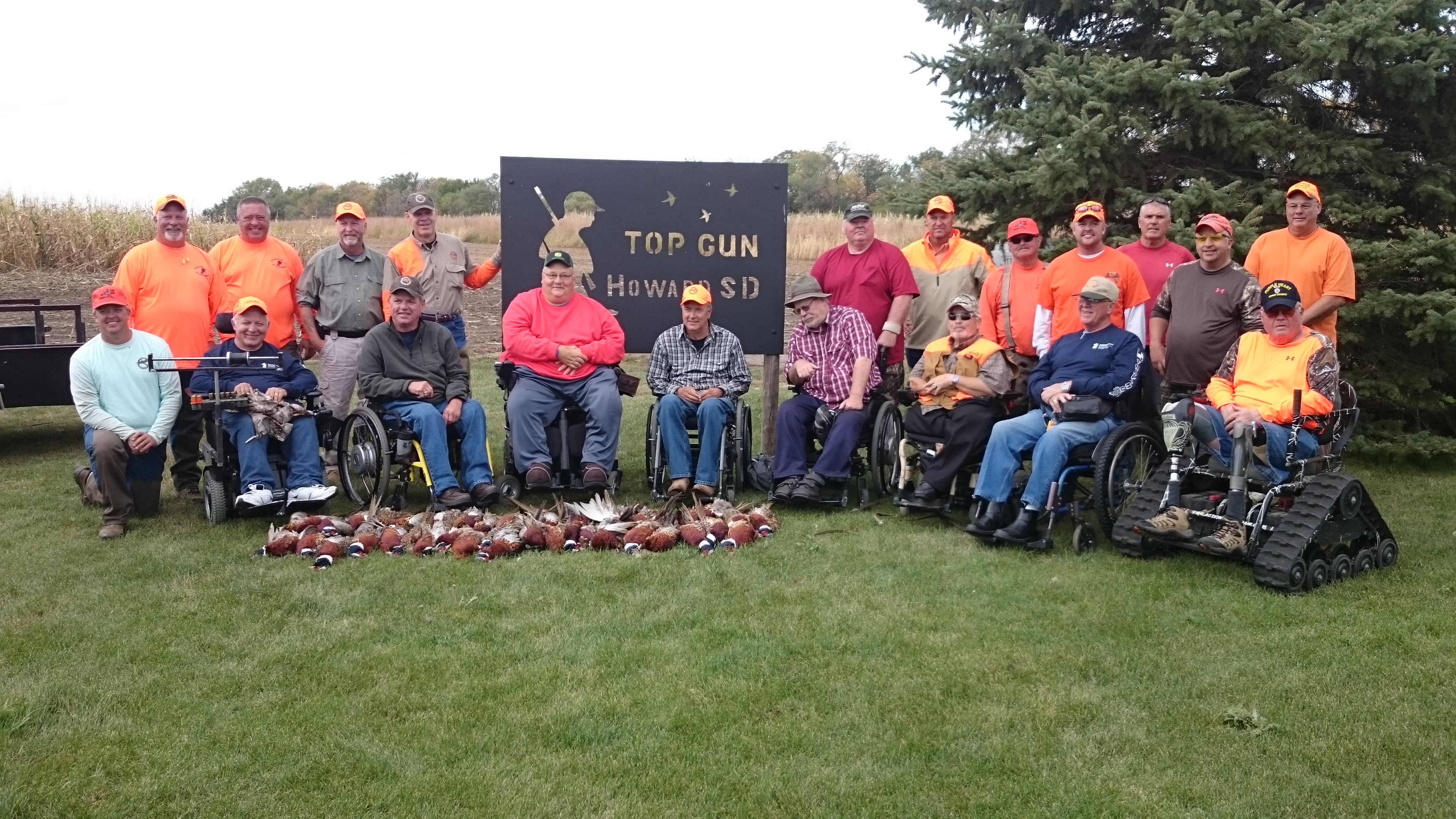 As we pulled into the first field, one that contained a food plot, grass strips and a shelterbelt, the fall colors were just starting to appear, a beautiful start to a South Dakota pheasant hunt.

The P.V.A. members would act as blockers and wingmen while several volunteers including Kevin Shumaker, Top Gun Hunting Ranch and his dogs worked their way through the field.

As the hunters worked their way through the field, several shots rang out as some of the birds made their way out of the field and away from the hunter’s stationed where the heavy cover came into the picked corn and bean fields.

Those birds making their way out the end of the field were met by a deadly volley from the P.V.A. wingmen and blockers stationed along the end and sides of the heavy cover.

As the walkers approached the end of the field, they would pause, allowing the dogs to work the cover, ferreting out those birds that had buried themselves into the heavy cover. Without these keen nosed dogs, the hunters may have walked past those birds buried deep in the cover.

With each pass through the field, the P.V.A. hunters showed they were not new to shooting as very few birds that presented shots to the hunters escaped.

As I watched on one occasion, several birds made their last mistake, flying within range of one of the hunters who dropped two of the birds with a three shot volley.

With each field we walked, the hunters became more attuned to the direction and speed the birds would fly and how much lead would be needed to intercept them.

On each field as the walkers slowed to allow the dogs to work, you could see the anticipation in the wingmen and hunters faces, as they knew in short order all hell would break loose as the dogs pushed the birds from the cover. As the birds thundered skyward, putting as much distance between the dogs and themselves.

Birds burst from the cover in all directions as the hunters shouldered their shotguns, doing their best to keep up with the fleeing birds. One hunter on the side made a spectacular shot, on a bird way out there at a distance I would have thought to be non-shootable.

This was South Dakota pheasant hunting at its finest with a group of veterans that had given much for their country, a hunt I am proud to say I was a part of.

It was obvious; by their laughter and good-natured bantering that these hunters truly enjoyed getting out, spending time with other veterans, enjoying a pheasant hunt in South Dakota.