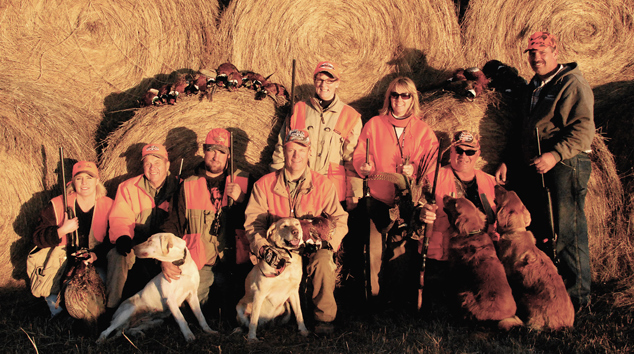 It won’t be long the enthusiasm is already starting to build. There are commercials on TV, ads in the papers and even special flyers pertaining to this upcoming event.

In just a few short weeks, one of the most highly anticipated hunting seasons opens with thousands of hunters heading into the fields in pursuit of the Ringneck Pheasant.

Too many, like many of my friends and relatives it’s a tradition and to others it’s their annual opportunity to hunt one of the most sought after game birds.

No matter what the reason, hunters from throughout the U.S. will converge on the upper Midwest when the season opens.

Although it’s not a native bird, it’s still is one of the most sought after species of upland game birds there is in the U.S.

Originally introduced from China to Oregon in 1881, the Chinese Ringneck Pheasant has done remarkably well in the upper Midwest.

In areas where adequate habitat is available, pheasant numbers do well, becoming a common site throughout the upper Midwest.

The seasons in the upper Midwest all open on about the same date with South Dakota’s Traditional season opener being the first to open on Oct 19, 2019 running through January 5, 2020.

Reports from the state the South Dakota pheasant brood survey, Pheasants per Mile (PPM) indicated that statewide there was a 17% decrease, with less number of hens and a 2% increase in roosters.

In some areas, those with acres in the Conservation Reserve program and other excellent habitat indicated the best increase in bird numbers.

On average, the northeastern part of the state, Aberdeen, Sisseton was where brood size increased by 8%, while the states average broods increased by just 3%.

Even though pheasant numbers may be down in some parts of the state, this year, the state will certainly live up to its reputation as the “Pheasant Capital of the World.”

In Nebraska, which had a similar winter and spring weather conditions as South Dakota, with snow, high waters in the spring on into the summer affected the pheasant hatching.

According to the Nebraska Game & Parks, the state’s best pheasant hunting is in the Southwest region of the state and in the Panhandle, particularly north of Alliance, in South-central portions of the state and across the state where habitat and access opportunities overlap.

In my part of the state, with some of the Pollinator CRP acres that are now flourishing, there seems to be in some smaller areas with more birds than in 2018.

Early season pheasants hunters do well using an ounce and a quarter of number six shot, with many  of the early season birds holding tight, especially those young of the year birds.

As the season, progresses the remaining birds will become seasoned veterans, many choosing to run, getting up way out in front of the hunter, this is when the heavier four and five shot loads used to bring down the wild flushing birds.

Because of the late plantings, much of the crops will still be standing the field on opening day, giving the birds, hundreds if not thousands of acres of additional cover.

Since the opener can be unusually warm, keep your dog and yourself by carrying plenty of water for both yourself and your dog.

Hunting dogs love to hunt and will do until they drop, during the warm part of the day, take time out to allow both you and the dog for an opportunity to rest and to get some water.  A pause also gives hunters the opportunity to map out their next field to hunt and their plan of attack.

Because of the extreme heat and lack of water, last year hundreds of prized hunting dogs went down from dehydration, so keep an eye on your dog for any signs of heat related problems.

It best for both you and your dog to rest and relax them from time, preferably in the shade while also providing them with plenty of water.

Pheasant season is a huge economic boost to those areas that promote it.  If habitats available and planted to attract and hold the birds, pheasant numbers will increase and the local economy will flourish when the hunters come in.

The dollars they spend at the motel, gas stations, café and bars means a lot to the local economy.

Those dollars are turned over three to four times within the community adding a big boost to our economy.

Those that enjoy the sport of hunting spend good amounts of money to partake in these activities.

Some states understand the value of these dollars and hunting has become a very important industry for them while other states are still missing the boat.

Allowing dollars to travel through and out of their states is not very bright, as both locals and out of state hunters spend weeks hunting and leaving their money in these hunter friendly states.

Gary Howey, Hartington, Neb is a former tournament angler, fishing & hunting guide, an award winning writer, producer, and broadcaster,  inducted into the “National Freshwater Fishing Hall of Fame” in 2017. He is the Co-Host of the Outdoorsmen Adventures television series and Outdoor Adventures radio. If you are looking for more outdoor information, check out garyhoweysoutdoors.com, outdoorsmenadventures.com and like Gary Howey’s Facebook page or watch his shows on www.MyOutdoorTV.com.

← Prev: Invasive species By Gary Howey Next: Return to Lake of the Woods' →