Platte P.V.A. Veterans Pheasant Hunt Those that asked little and gave a lot By Gary Howey

As a Veteran, I feel privileged to spend time with other veterans and this season, I’ve had several opportunities to spend time in the field with many of them.

On this trip, Platte, S.D. is our destination, where we join the North Central Paralyzed Veterans of America on the Platte American Legion 2015 P.V.A. Hunt. Platte, is a small community with a big heart, as the community, Platte American Legion, Platte Pheasants Forever and the East River Sportsmen worked together to make this event a success.

Each morning, before heading out to hunt, the Platte Pheasants Forever and the East River Sportsman put together a great breakfast for all those attending at the Platte Community Center. 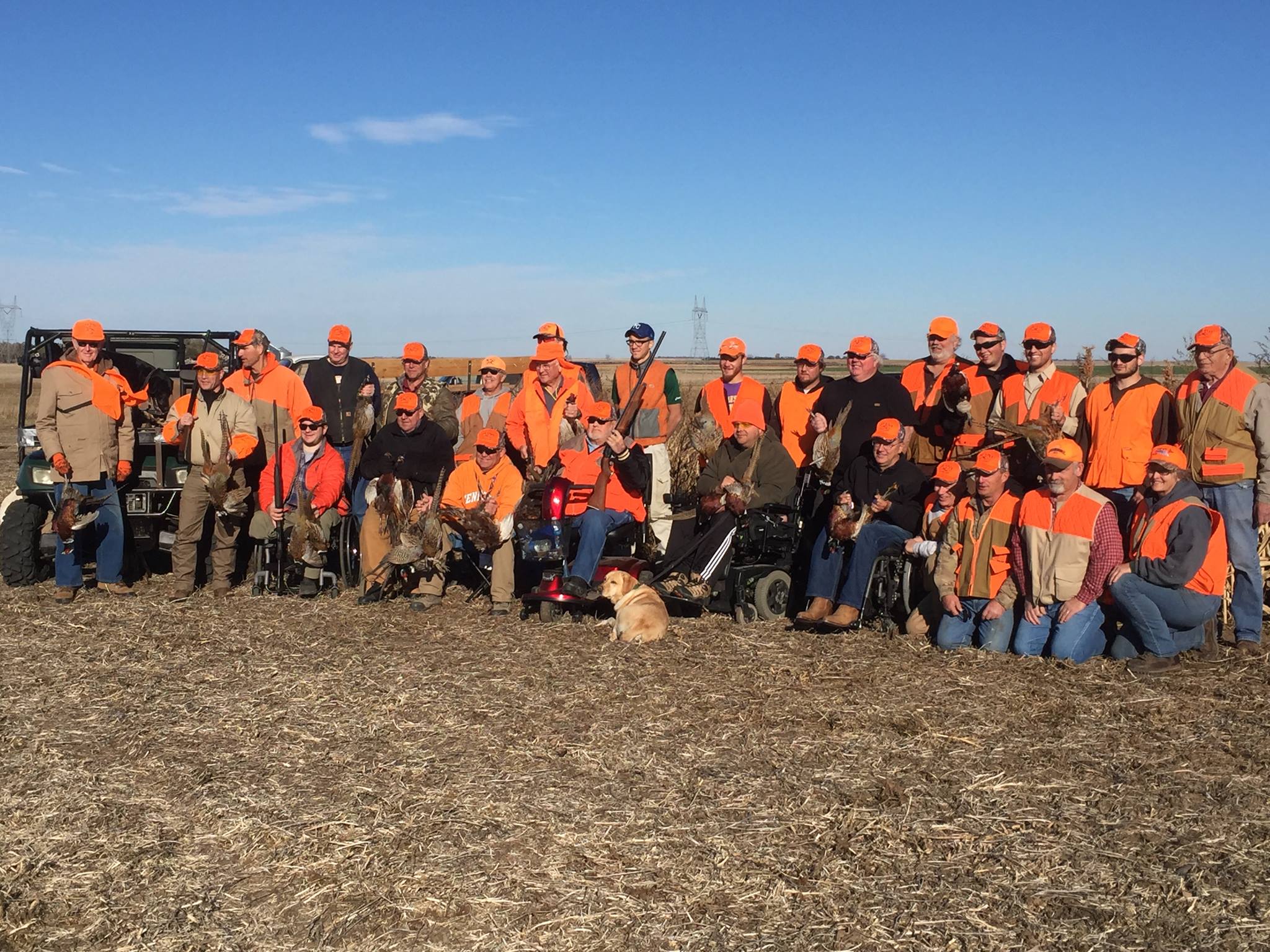 The large group, made up with P.V.A. members and volunteers, required us to divide into two groups where we would be hunting with some of the local ranchers. After the meal, it was time to hit the field, one group going north while the other would head west.

I would be filming with the north group while Team Outdoorsmen Adventures member Scott Ulrich would be out with the west group.

Our group would hunt grassland, trees along with some cropland and were able to bag a few birds, as our birds were extremely wild, running ahead of the walkers, coming up well out of range of the walkers, between our walkers and the blockers.

Scott’s group, which would be in the field with hunting dogs, were able to find large number of birds, allowing their group to bag close to their limits.

The following day after breakfast, our two groups combined, hunting together, where we would hunt unpicked corn, sorghum and some grassland.

With the help of volunteers who walked the corn and the dogs, both pointers and flushers, the group would have an excellent hunt.

Some P.V.A. members would be hunting out of pickups, wheel chairs and in a specially developed 4-wheeler attachment invented by Todd Wesseling of Platte.

Early on, during this hunt, I would be filming with the walkers and later filming out of another 4-wheeler side-by-side, while Scott would try to catch the action at the end of the field.

The non-hunting volunteers and hunting dogs would slowly push their way through the fields. As they moved through the field, the plan was to push the birds in the direction of the blockers stationed along the edge and along the end of the field, allowing those in wheel chairs, on the ground and in pickup boxes to get an opportunity for a shot.

As we approached the end of the field, the hunters along the outside edge moved forward to set up with the blockers while the walkers paused, allowing the dogs’ to work the last 25 yards, forcing the birds in the air out in front of the P.V.A. members blocking.

The first bird erupted from the cover, then another and another, with birds exploding out in front and on either side, before long the sky filled with flushing pheasants as the hunters at the end of the field did their best to catch up with these high flying birds.

On each push through each field, the P.V.A. members had the opportunity, to spend time with friends, to shoot some birds and be a part of this great outdoor tradition, pheasant hunting in South Dakota.

Events like this, allow these veterans the opportunity to get out, join others and to enjoy the outdoors.

Without the support of people like those in Platte as well as the North Central Paralyzed Veterans of America, these veterans wouldn’t have the opportunity to be part of these events.

Our thanks to the people of Platte, South Dakota, the Platte American Legion and Auxiliary, Platte Pheasants Forever and the East River Sportsman for allowing our crew to take part in this event.