When travelers made their way north on Interstate 29 as they came into the Watertown, S.D. exit twenty-one years ago, when the Art Center first opened its doors, they could not help but notice the Redlin Art Center as it rose majestically from the South Dakota prairie landscape.

Today, there are several buildings adjacent to the Center, but its size and beauty dwarfs them as do the grounds, concrete walking paths, ponds and gazebo.

The Art Center, designed by Redlin’s son Charles, is the home of one of America’s greatest and most respected Wildlife-Americana artists, original paintings by Terry Redlin.

At the Center, visitors have an opportunity to view one hundred and fifty of his original paintings as well as other of his artwork.

The Center, opened in June 1997, is located just on a beautiful tract of land just off the Interstate on Exit 177 along U.S. Highway 212.

Once inside, you will find polished granite, with the main floor of the gallery covered with more than 9,000 square feet of white granite tile.

There also, you will find over 24,900 square feet of granite from countries throughout the world including India and Africa.

The grand entrance, welcomes you to more than 10,000 square feet of black Galaxy granite brought in from India.  The same black granite lies behind the railings in the Gallery.  The walls of the Gallery also feature another 5,900 square feet of white Impala granite from Africa.

The Redlin Art Center an architectural marvel a fitting place to display Terry’s artwork, in Watertown, the place he called home.

As Terry once quoted, “An American novelist once told us that you ‘can’t go home again.’ He was wrong. In my mind, I never left home, even when physically away. And when I finally returned, it was a great relief. I had a deep feeling that, finally, things were going to be okay. I was reconnected to my past, and to a childhood that was magic.”

Redlin, a Master Artist, received numerous accolades from numerous conservation groups, such as Ducks Unlimited and Pheasants Forever.  Redlin was designated many times in the 1990’s as “America’s Most Popular” U.S. Artist, and was inducted into the U.S. Arts Hall of Fame in 1992, the South Dakota Hall of Fame in 2001 and the Watertown Hall of Fame in 2014.

The paintings displayed at the Art Center depict some of nature’s most beautiful scenes, reminding us of our childhood memories and those days gone by.

A huge supporter of wildlife and the organizations that work hard to preserve them, Terry’s artwork raised $40 to $ 50 million dollars for numerous wildlife conservation groups including Ducks Unlimited, Pheasants Forever and the National Wild Turkey Federation.

In 2007 at the age of 70, Terry was diagnosed with Alzheimer’s disease, at that time was working on several paintings. Shortly after this diagnosis, he announced his retirement, passing away on April 24, 2017 at age 78.

Julie Ranum, Executive Director of the Art Center indicated, “Terry’s final painting Evening on the Ice, was a piece of his artwork he began painting in 2005, but he was struggling. He simply could not finish it. For years, the Redlin family held the painting, unsure of how to explain why it is so different from the rest of Terry’s collection. The colors were different; the level of detail different, the overall style is different. It is a reflection of a very difficult time in Terry Redlin’s life.”

In 2007, Terry’s wife, Helene, and son, Charles, finally convinced him to stop working on the painting and allow it to go to press with the original being placed in the gallery of the Art Center In 2018,

Terry was also working on a set three other paintings, now known as his “Farewell Collection”, which were near completion when illness resulted in Redlin’s decision to retire. 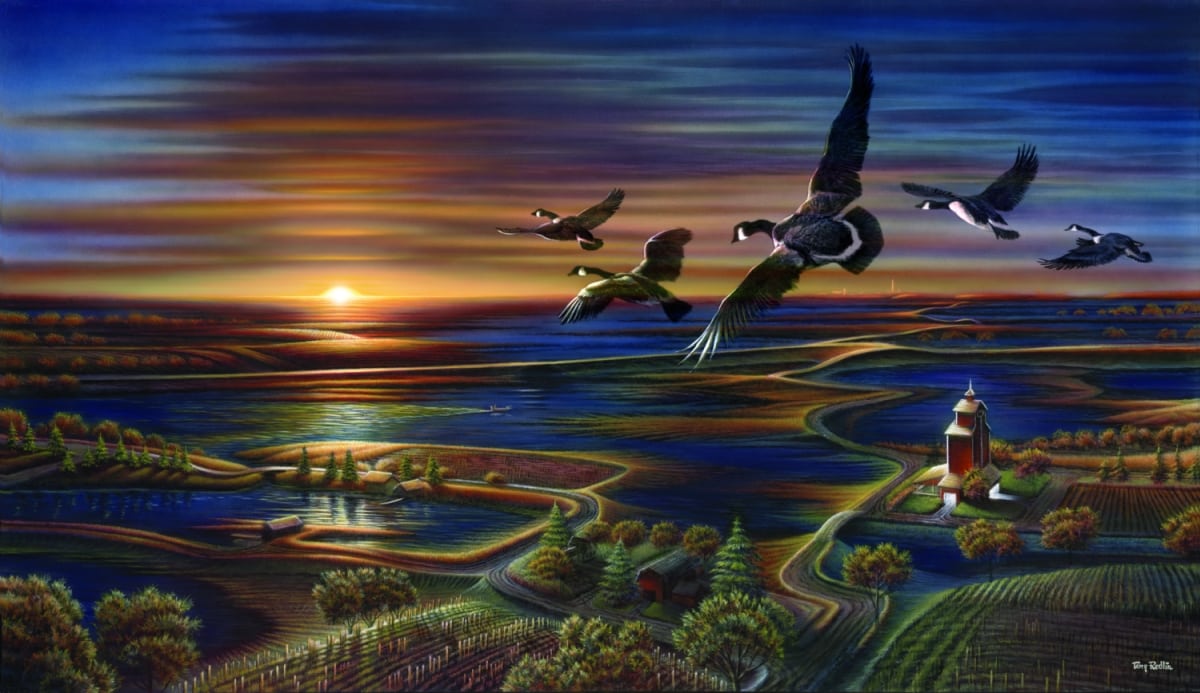 Julie Ranum indicated, “These final paintings, begun in 2005, that he failed to finish, are different from other of his artwork, including a somewhat different style, colors and details, reflecting that difficult time in Redlin’s life. They are just very different from what we know he would have done if he hadn’t been struggling with Alzheimer’s.”

The Redlin Art Center, gallery & museum offers Wildlife & Americana art lovers the opportunity to view some of Terry’s finest works from throughout his career.

Not only is Watertown, South Dakota known for the Redlin Art Center, it is rich in history and the home of unbelievable outdoor opportunity, fishing, hunting and each time I am back home, I visit the Art Center, as his artwork is something I want to see more of, giving me an opportunity to enjoy the beauty of Terry’s artwork.

If you have not had the chance to stop by to see and visit the Redlin Art Center at which there is no charge to visit, you are missing the opportunity to see this splendid building and the outstanding work of one of America’s finest Wildlife and Americana artist Terry Redlin.

Terry may be gone, but his artwork and his memory will last forever!

More information on the Redlin Art Center is available online at www.redlinart.com