As I approached Watertown on I-29 on the April 29, the flags in front of the Redlin Art Center were flying at half-staff.  These flags as well as all the flags throughout the state were at half-staff at the request of South Dakota State Governor Dennis Daugard to honor the life of iconic South Dakota artist Terry Redlin who passed away Sunday April 24.

Those of us who are members of wildlife conservation groups love the outdoors, and appreciate beautiful artwork lost a great friend.

Sunday April 24 at 78 after his long battle with dementia.

I was very fortunate to know Terry, as he and my stepfather Francis Kick from Watertown were good friends.  Over the years, I spent time with Terry in his home and at the Art Center when we filmed several of our Outdoorsmen Adventures shows with him.

Terry was a quiet man who put what he saw in the outdoors on canvas as no other could. If you saw one of his paintings, it jumped out at you, grabbing your attention!  His paintings were scenes in the outdoors, which many outdoorsmen and women had experienced or someday would hope to see.

The light coming from the windows of the cabins, homes, the sunrises and sunsets on his paintings was his trademark. His were the heart-warming scenes captured on canvas.

Because I was born and raised in Watertown, when I viewed his artwork, it brought me home. Many of his paintings were scenes from my childhood, things I saw and experienced. 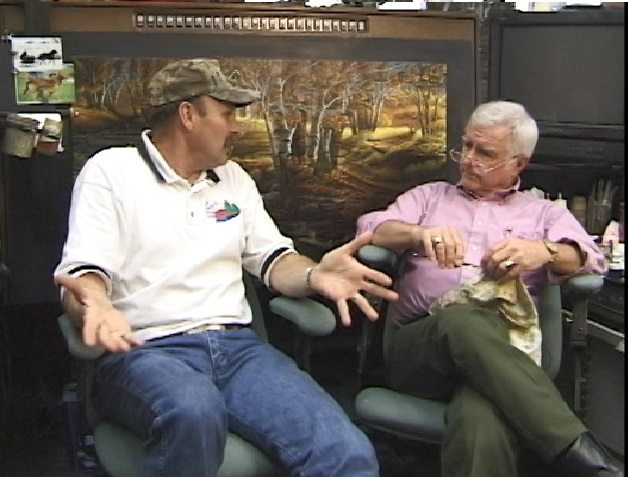 Gary Howey and Wildlife artist Terry Redlin at his home in Watertown during the filming of one several Outdoorsmen Adventures shows Howey was privileges to have the opportunity film with Redlin.

Some of his paintings included a sign with one of my classmate’s name on it, the grain elevators in the area, familiar vehicles, some of his Watertown relatives, the many Langenfeld Ice Cream signs, the Kemp Avenue Bridge, St. Ann’s Hill and numerous things I remember from my youth.

The Redlin Art Center opened in Watertown South Dakota in 1997 and is located where I-90 and Highway 212 intersect. Redlin chose Watertown as the location for the Center; he wanted to repay the state of South Dakota for the $1,500 scholarship he received toward his education at the St. Paul School of Associated Arts in Minnesota. The scholarship was awarded to students with a disability. He qualified as he lost his leg at the age 15 when a drunk driver hit the motorcycle on which he was a passenger.  Terry once told me, if he hadn’t gotten that scholarship, he would not have been able to go to college.

The Redlin Art Center museum displays more than 150 of his original oil paintings, as well as many prints, sketches and childhood drawings. The Art Center opened in 1997, and has seen over has 3 million visitors coming through since its opening.

I have made numerous visits to the Center and on each trip; I’m amazed by Redlin’s breath-taking artwork.

Terry burst onto the wildlife-art scene at the age of forty in 1977 with the release of his “Winter Snows” painting and since that, time has painted hundreds of beautiful pieces that include both wildlife and Americana paintings.

Redlin loved the outdoors and worked hard to help conservation groups raise funds for habitat and wetlands. A multitude of  his prints were the highest selling items at many Ducks Unlimited banquets helping to raise over $28 million for the development of habitat and wetland projects.

He received many recognitions, which include; the 1981 and 1985, 1st place in the “Minnesota Duck Stamp competition”, 1st place in the 1982, “Minnesota Trout Stamp contest”, also placing second that year in the Federal Duck Stamp Competition. Terry was honored as “Artist of the Year” for Ducks Unlimited (National and Minnesota), and as “Conservationist of the Year-Magnum Donor” by the Minnesota Waterfowl Association for his gifts of entire print collections. Three times, he was presented “Lithograph of the Year” by the National Association of Limited Edition dealers. He was named America’s Most Popular Artist by U.S. ART Magazine eight years in a row, 1991 through 1998. Redlin was inducted into their Hall of Fame in 1992, inducted into the Watertown Hall of Fame in August 13, 2014 and the South Dakota Hall of Fame in 2001.

His series of eight paintings “America the Beautiful” is Terry’s tribute to ideas and values many Americans feel. This series included: “O Beautiful for Spacious Skies”, “For Amber Waves of Grain“,  “For Purple Mountain Majesties“,  “Above the Fruited Plain“,  ” God Shed His Grace on Thee“, “And Crown Thy Good with Brotherhood“, and “From Sea to Shining Sea“.  His American Portrait series, included  “His First Friend, “His First Day”, “His First Graduation”, “His First Home Coming”, “His First Good By”, and His Last Good-Bye”. Thos series was a tribute to his brother in law Chuck Redlin, who was killed in Viet Nam.

These are but a few of Terry’s beautiful artwork that millions of others and i will enjoy long after he has gone.

Terry will always be remembered by those of us who love the outdoors , have seen his paintings and loved the way he brought the outdoors to life!

← Prev: Here’s the story behind my state record bullhead By Larry Myhre Next: Morel Mushrooms There for the Picking By Gary Howey →