Morel Mushrooms There for the Picking By Gary Howey

Well, its suppose to be spring, with the temperatures  warming up, the snow geese have moved through and the turkeys hunting season is in full swing.

This year, spring has come slowly, with heavy winds, then warmer temps followed by a freeze and an over abundance of rain which had Mother Nature not sure what was going on.

It’s also suppose to be that time of the year when an infectious disease takes over the life of many avid outdoorsmen and women in the upper Midwest. It infects men, women, children and it doesn’t make any difference if you’re young or old!

All of the old signs that I’ll talk about in this column have been all thrown out of whack, as the budding bushes and tress we usually rely on to let us know when it’s time to head out to check things out started to bud, froze and now coming on, so some of this information may be old news.

What causes this infectious disease is a fungi soon to be popping up among us, it’s the morel mushroom and once they start poking their heads out of the ground, men and women leave their home, family and jobs heading for the river bottoms, island and hills on mushroom hunting excursions.

Morels, found throughout the upper Midwest are easy to recognize and delicious, making them the most sought after of the wild mushrooms.

They vary in color from off-white to gray in color.  The simplest way to explain what a morel looks like is to look for a mushroom growing on the ground resembling a cone shaped brain.

Morels start popping up in the spring, this year they have been up early with my daughter Heather Kneifl and her husband Sid had a neighbor bring some over a week ago.

According to some of those experienced old timers, you’re just wasting your time hunting mushroom until the oak leaves are the size of a mouse or squirrel’s ear.

I’ve never known anyone who’s either of these, but I’ve heard it’s smaller than an acorn crown and about half the size of your smallest fingernail. 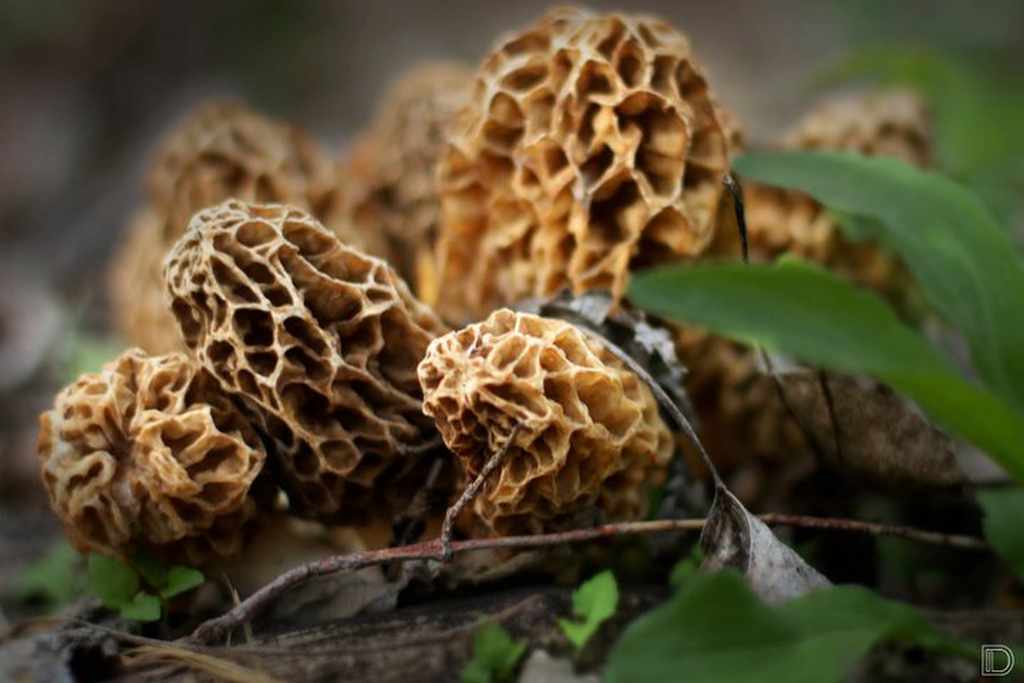 There are several other things indicating it’s time to head out and start looking for morels. One is, to keep an eye on lilac bushes and when they start to bloom, it’s a good sign that the morels will be out.

You’ll also want to watch the crab apple trees as about the time, they start to bloom, which generally is the week of Mother’s Day, as this is when the morels should be the thickest. Others use the almanac to figure out the time when morels start to appear.  If you look in the almanac, take the average date for the last frost in your area and then add two weeks to that date, you should be pretty close to the peak morel season.

Of course, moisture, humidity, sunshine along with warmer temperatures has a lot to do with when they will appear.

If you have, a week of fifty-five to sixty degrees during the daytime with no freezing temperatures at night it’s generally a good time start hunting. Along with warm temperatures, moisture is also important. Many mushroom hunters say the best time to hunt for morels is after a rain, when temperatures are around 60 degrees with high humidity in and around the edge of forested or recently cleared forestland with ash, elm, cottonwoods and oak trees. During the early spring, look for them in the sandy areas on south facing slopes as these areas warm up quickly and retain heat longer. Because the islands in the river are predominately sand, the soil will warm up quicker, where the first morels will appear

As the season goes along, go deeper into the trees as morels will also show up once the ground on the north-facing slopes start to warm.

One of my most successful hunts was near river, very early in the season in an undisturbed picked cornfield, where we found hundreds of them.

The bottom ground originally had been a forest for many years, the trees removed, leaving much of the root system buried, left to decay, and the field then planted to corn. As the roots from the old elm and cottonwoods decayed, they created a depression, which made for ideal places for the morels to take root. In these, depressions we found numerous clumps of morels sticking their heads above the soil.

I’ve also found mushrooms around trees that were dying when their bark starts to fall away, as the tree is about to fall over or had recently fallen to the ground.

The first morel is always the toughest to locate because they blend very well with the forest or vegetated ground and the leaves covering it.  Once you’ve found one, be sure to look the area over closely. You’ll see them best at ground level by kneeling down because morels are like; Perch, if you find one you generally find a bunch.

One thing is certain when it comes to finding morels; there are no set rules as to where the morel might be located.   Conditions change from day to day during the spring and a hillside that was barren on Monday may get a rain shower or warmer temperatures, causing the hillside to erupt with morels by Wednesday.

My preferred method for locating mushrooms isn’t very scientific; it’s the old wonder around aimlessly method, picking my way through the vegetation until I spot one and then getting a bird’s eye view of the area at ground level as many times as morels will just be pushing up through the leaves and are verily visible.

For years, morel hunters have hit the woods with bread sacks, ice cream buckets and other non-porous containers.  Some seem to believe that these things have lead to less morel mushrooms.

Because mushrooms reproduces through spores, which need to be returned to the ground in order to grow, if you put in a solid container like those mentioned above, we’re denying the morels the opportunity to disperse their spores and to re-seed the ground.

In order to allow the morels to throw their spores, it’s not a bad idea to use collection bags that are porous such as onion bags or some type of a bag that allows the spores to release back into the air.

Mushroom hunters south have their own language and in mushroom hunters’ jargon, down south those that search the river valleys and hills looking for the delectable fungi are called “shroomers” with a bunch of morels known as a “mess”.

Once you’ve found a mess of mushrooms, you’ll need to clean them. The first thing you’ll want to do is to split them in half from the top to the bottom.  Then rinse them off under running water as the crooks and crannies of the mushroom may contain sand or an insect that has set up housekeeping there. After you’ve rinsed them thoroughly, you’ll want let them set in water for a short period in order to flush out the sand, debris and stubborn insects. Don’t over soak them, as they’ll absorb water and become spongy.

Then the best part of morel hunting begins, preparing and eating them. There are numerous ways to prepare morels including fried, cooked in butter, which brings out their rich, almost meaty flavor or in mushroom soup or to fry them up in some type of batter.

After the mushrooms have been sliced and rinsed, let them drip off on a dry towel, dip them in a batter made by combining equal parts beaten eggs with milk and crushed up saltine crackers. Place the coated morel into a pan and cook in butter until crisp. Don’t over cook them, as they will become crunchy.

Morels are best when prepared fresh, but if you have a good mushroom hunting season and would like to preserve or save some of them for future use, mushrooms can be dried, frozen or blanched.

I’ve found that by dehydrating them, I can keep them for an extended period of time and when I’m ready to fry them up, all you need to do to bring them back to life, is to soak them in water for a short period of time and they’re ready for the pan.

Morel hunting is excellent ways to get outside and not only enjoy the outdoors but to enjoy the bounties that Mother Nature provides.

This spring while you’re out walking along the creek, river or hillsides look around as morels are found throughout our area and you never know where they might appear.

They’re excellent eating and a great way to start out the season!

← Prev: Remembering Terry Redlin By Gary Howey Next: GETTING THE MOST OUT OF YOUR MINERAL SITES →