Well it’s finally starting to look and feel like spring and to be honest with you, I’m ready for the warmer weather!

Each day gets a little longer, the sun is warmer and everything is starting to green up.

It’s what we outdoorsmen and women have been waiting for, as they’re anxious to hit the water and see what’s biting this time of the year.

With the water temperatures, starting to raise the walleyes below the dams on the river and in the lakes will start feeding more heavily.

Spawning in some areas is ending as the water temperatures have or will soon reach 50, which in the upper Midwest is generally in the month of May.

If you’ve fished the post spawn, you know that the smaller more aggressive males make up the majority of the fish taken during this time of the year.

After the spawning and recuperation period, walleyes will go on a feeding binge because eating during the spawn wasn’t real high on their “To Do.”

This feeding binge can last throughout the month and at times may even run into early June.

On sunny days the best fishing, will be in the morning or towards evening, because in the middle of the day the sun is beating down on the shallows which forces walleye and sauger to move deeper as they’re not big fans of a lot of light.

If you’re fishing on cloudy day or times when the sunlight is subdued, chances are the walleye and sauger may spend the better part of the day cruising in and out of the shallows looking for a meal.

It’s during those low-light periods when walleyes are on the prowl in the shallower water, usually 10 foot or less.

Remember just because the walleyes are on a feeding binge it doesn’t mean they’ll be dashing and darting here and there attacking everything in sight. 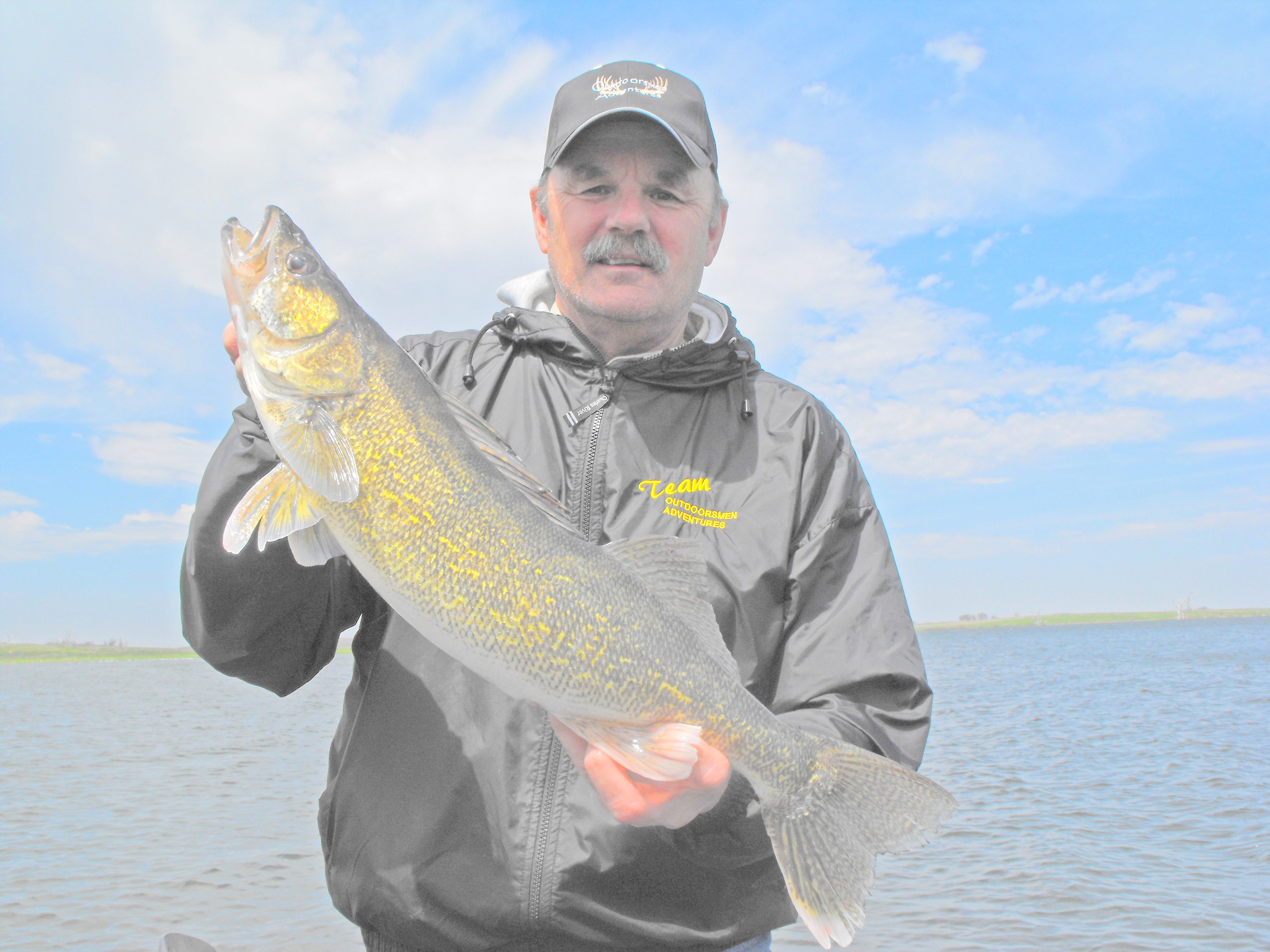 Author with an early spring walleye, he took while fishing with a live bait rig (split shot, small hook and minnow) in six foot of water along a rocky shoreline.

Everything in the aquatic world will be moving at about the same speed before the water temperatures really start to rise, so your bait should be moving slow during this time of the year.

Jigs or live bait rigs tipped with minnows are deadly in the spring! Anglers using 1/8 to 1/4 ounce jigs fishing the shallower water do well in the spring!

River anglers and anglers fishing the deeper water will probably need to go to a heavier jig, up a 3/8 ounce in order to keep their lines vertical, which allows anglers to keep their bait vertical and on the bottom.

Live bait anglers using open face spinning gear will want to stay in contact with their line at all times. Walleyes in the spring aren’t exactly going to rip the rod out of your hand when they take the bait, as they are moving slow in the spring!

When live bait fishing, it’s a good idea to keep your bail open and have the line in contact with my finger, when you feel a bite, release the line as you drop your rod tip towards the fish. After a short count, a couple of seconds or so, reel up the slack line and then if you still feel pressure, set the hook.

Sauger, the walleye’s smaller cousin are well known for biting onto the tail of the minnow or the tail of your Gulp and just hold on, only to spit it out when they come to the surface.

There are a couple of things that you can do to prevent them from spitting the hook. I like to use a stinger or trailer hook in the spring, a stinger hook is a second hook attached to your jig that lies right along the minnow’s back and then hooks into its tail.  These can either be a single or treble hook, depending on what type of water you’re fishing.

Another thing that will help you to hook them is to feed the fish line for a longer period once you detect the bite!  Instead of feeding line for a couple of seconds, make it 5 to 10 seconds.  Many times an additional second or two will give the fish enough time to get the bait and hook into its mouth.

I mentioned earlier that the walleyes would be in shallower water, which is usually less than 10 feet.

During the early spring, the angle of the sun doesn’t really affect the walleye’s sensitive eyes, so they’ll remain shallow throughout much of the day.

But, as the water temperatures begin to warm, walleyes are found shallow during low light periods (early morning and late afternoon), then move back out into deeper water as the sun moves higher in the sky.

Locating fish is the key to catching fish!  This time of the year, you’ll want to find areas with warmer water. These areas are usually located on the north shoreline.

The reason for this is the part of the river or lake that gets the most direct sunshine during the day, warming up more quickly.

Another spot to look for walleyes are areas where a creek or stream flows into the lake or river.  These shallower bodies of water, generally dingier in color, warm up faster than deeper water and their warmer water attracts the fish. If you have a creek or stream enter where you’re fishing, be sure to check the shallow water at the mouth of the stream where it comes into the river. Walleyes and sauger may have moved into this area because the water temperatures there are warmer.

Northern exposed rocky areas are also a good bet.  The sun heats up the rocks, which retains their heat throughout the day and into the night. These warmer areas will attract both the walleye and the critters that they feed on.

Spring fishing may be a little slow, but there’s no better way to spend a nice warm day than by spending a few hours fishing and enjoying the great outdoors.

By doing some Pre-Season Scouting which should include Game Cameras, you may have the opportunity to tag a buck like this one that showed up on this...

END_OF_DOCUMENT_TOKEN_TO_BE_REPLACED

Sight Fishing, Spotting Them, Before They Spot You by gary Howey