You won’t have to look very far in most fishing publications or on a fishing show where you won’t hear the words structure mentioned several times.

One thing is for sure, when you locate the structure on a farm pond, Lake Oahe or Lake Kampeska, you’re going to find the fish.

Structure, exactly what is it?  A good definition of structure would be any difference or change on the bottom configuration.  At times, it might be large and at others, not large at all.

No matter what size or type of structure you find on any body of water, it’s a good bet that there will be some aquatic life in that area.

Now that we know the fish you are hoping to catch might be relating to some sort of structure in the lake, all you need to do is to locate the right piece of structure. This change in the bottom contour can attract numerous species of aquatic creatures, which creates a food chain.

To make our body of water the underwater structure easier to understand let’s put it into above water terms. Let’s imagine a large pasture is your body of water with a large tree in the middle and a small clump of plum brush in the corner.

Fish are like any other animal such as a deer or coyote and when they enter the pasture, the first thing they’re going to see is these two changes or features in the field and they’re drawn to them as these may be a good place to look for food.  If they’re underwater, these changes would be called structure.

As I mentioned earlier, the change doesn’t need to be huge, as it can be a slight depression on the bottom or areas where the bottom content changes from soft mud to hard gravel.

I’ve caught fish around some structure so small, unless I’d seen it when the water was low, I’d have never known it was there.

It could be a few weeds along the shoreline, a change from mud to gravel, a depth change in the old river channel, submerged trees, humps or points in the Missouri River reservoirs lakes. It doesn’t have to be a drastic change; it just needs to be something different.

WHY FISH RELATE TO STRUCTURE

Studies have shown us how fish relate to structure and how much is needed in order for the fish to be attracted to one particular area.

In studies, fish were put into a large stock tank and when the bottom configuration is all the same, the fish roamed around the tank. However, when rocks were placed on the bottom, the fish moved onto those rocks.  This example didn’t give the fish all they needed as most real structure does, but it gives you an idea as to how fish react to it.

What draws these fish to these areas is simple; structure in a lake, reservoir or pond gives the fish everything they need; a food source, security and in some cases comfortable water temperatures.

All aquatic creatures are attracted to these areas some because it offers protection while others are looking for a meal, as this is where there food source is found. Structure is attractive to all aquatic creatures, from the smallest microorganisms to the minnows and baitfish as well as the larger game fish, as they’ll all be relating to or using the structure on the bottom. 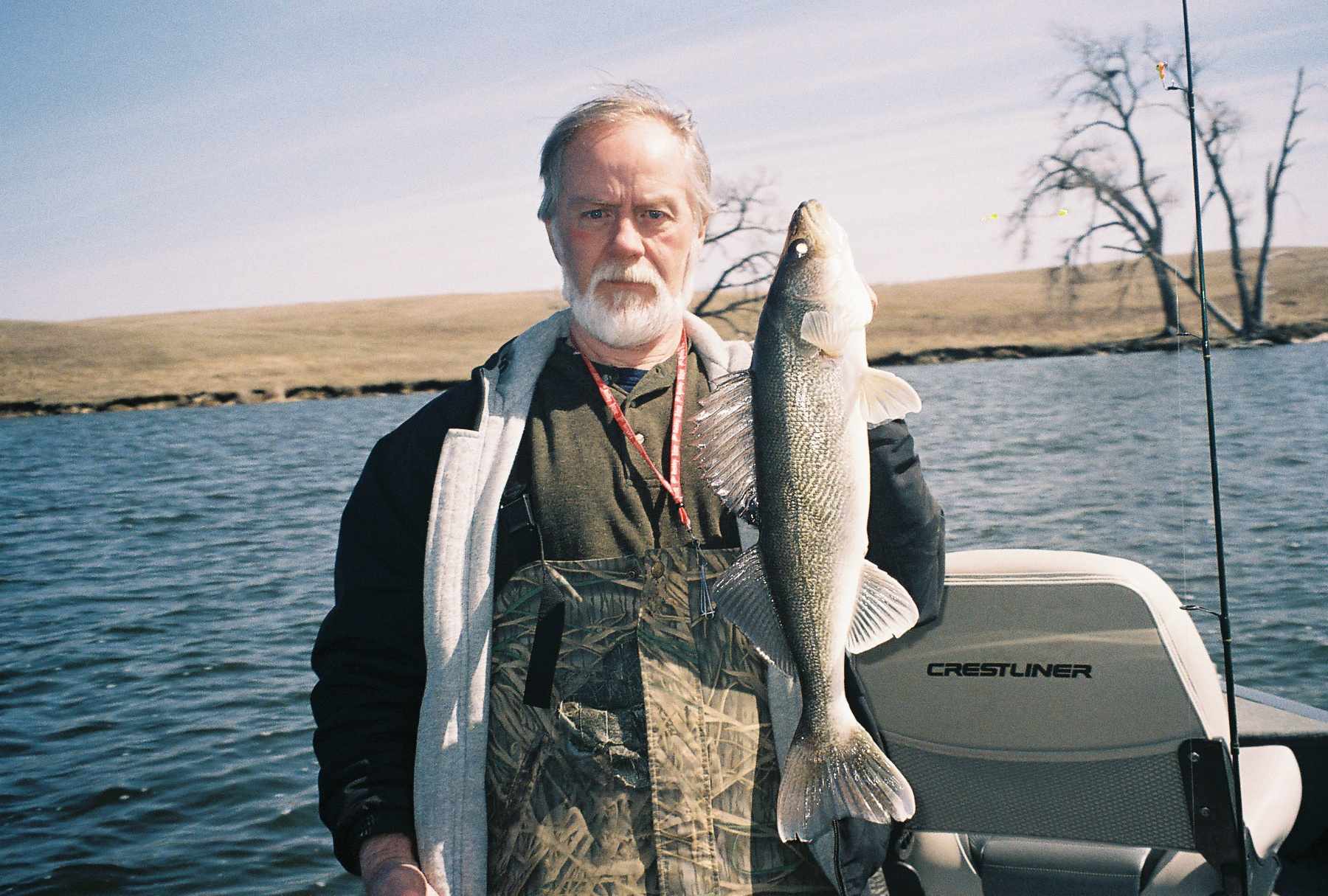 Team Outdoorsmen Adventures member Don Fjerstad, Watertown, S.D. with a walleye taken from a mud to gravel change in the bottom structure in a Glacial Lake in Northeastern South Dakota.

These areas also offer security, giving the aquatic insects, minnows, fry, crawdads and other creatures a place to hide and hopefully to keep from being eaten.

Some types of structure, for instance a weed beds and submerged timber give fish a place to get out of the sun and in the case of the weedbeds, more oxygenated water, comfortable water temperatures during the hot weather.

In the past, I’ve found walleyes lying in shallow muddied water during the heat of the day next to the only structure on that stretch of the river. It was a 4” deep depression running from the shore out into the deeper water. This shallow trench was created when water levels were low and heavy rains washed off the adjacent road.

The baitfish, in this instance, shiners had followed the zooplankton into the shoreline and was hiding in the depression. When one made the mistake of poking his head out of the depression, a walleye was there to make sure that it didn’t get a chance to make that mistake again.

We ran into a similar situation on a recent trip to the Webster, S.D. area as the only real structure in the lake that we could find were submerged trees, not exactly what most people would consider prime walleye structure.

Several factors made these trees ideal structure. The 25 MPH wind blowing into the trees had blown zooplankton into the shoreline, which attracted the baitfish, with the walleyes not too far behind.  The waves crashing into the shoreline carried sediment back out into the water, this muddied water creating a mud line allowing the light sensitive walleyes to move shallow into the flooded trees. These trees had now become ideal structure attracting not only walleyes, but also other species of predator fish.

On this trip, we tried several different methods to fish this area with our best luck by using crankbaits that are not generally considered walleye baits. On this trip, we caught our limit of fish casting heavier Firetiger lipless crankbaits up into the muddy water around the submerged trees.

You don’t want to be like some anglers thinking that only a certain type of structure in one area of the river or lake is the only place holding fish.

If you find some type, of structure, holding fish but don’t want to fight the crowds. Take the information you’ve learned from that area and search for other structures that are similar. It’s a safe bet that once you locate a similar area, there will be fish biting there also.

If the crowd is trolling crankbaits along a muddied up rocky shoreline with a 50 degree surface temperature with rocks extending from the shore line out into 6 to 10 foot of water, you should be able to take this information and head to another area with similar structure to see if you can find your own hot spot.

Not all structure in the river or lake will hold fish at the same time, but unless something changes drastically, each year when conditions are similar, you should be able to return to these areas and catch fish.

It’s not rocket science, it all has to do with the wind, water temperatures and water clarity.

On calm sunny days, in a clear water lake all aquatic life will relate to deeper structure to avoid the direct sunlight.

Of course, the exception to this is if the wind is blowing hard as you’ll want to fish on the windy side, as the food chain will be forced to follow their food.

If you are fishing dirty or turbid water, you may be able to fish the shallow structure throughout the day until shallow water temperatures become too warm.

Don’t overlook even the slightest piece of structure as a small change in the bottom contour can hold some truly big surprises.