Successful turkey hunters must learn from mistakes By Larry Myhre

It  was mid-morning on South Dakota’s Rosebud Indian Reservation. I was hunting turkeys and failing badly. Birds on the morning roost had walked away, and I hadn’t seen a tom since then.

This was many years ago. I had resorted to “running and gunning” to find a hot bird. That means you cover a lot of ground calling and hoping to fire up a tom.

I was at the bottom of a side canyon filled with Ponderosa pines and brush. I yelped loudly on the diaphragm call, and the answering gobble almost blew my hat off. I was right on top of that tom. I looked around for a place to sit and found there was no tree within 100 feet.

I did the only thing I could do. Drop to the ground and hold the prone position. The muzzle of my shotgun was pointed toward where the bird had gobbled. I’d no more than hit the ground when three hens came running in. I thought they were going to go right over me but at the last minute they swerved and ran to my right. Behind them were two jakes. My heart fell. Was it the jake that had gobbled?

At 30 yards I let loose, and the copper-clad sixes put him down. Hard.

Lesson learned. Never call unless you have positioned yourself next to a hide. Preferably a tree wider than your shoulders.

When you first start turkey hunting, you make a lot of mistakes. Sure, you may have studied this sport hard, perhaps even almost memorized a couple of books on turkey hunting. But things are a lot different in the field. You will screw up, and when you do you had better learn from your mistake. 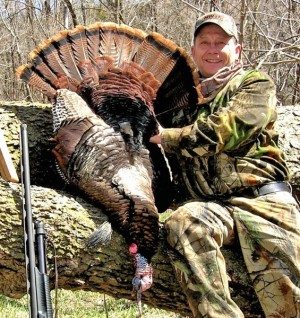 Take, for instance, another hunt I had in the Loess Hills of Iowa.

Decoy in front, my back against a tree and a tom answered my yelps off to my left. He was close, and I didn’t dare move too much. Being left handed with a shotgun, my barrel was pointing more to my right than in the direction of the bird. I should have slowly moved the butt of the shotgun to my right to be in a better position to shoot, but I thought if the bird comes in and walks around the decoy I’ll be able to get him.

Problem was, he didn’t come in. He hung up right at the edge of the opening, gobbling his head off but not moving in. I hung in there. Waiting. Waiting. But he came out of strut, turned around and disappeared into the trees.

Lesson learned. Learn to shoot from either shoulder and when you hear a gobble, change sides if you have to.

The gobbled answer to my yelps was a long ways off. I pulled the decoy from my hunting vest, ran out in front of the tree and planted it into the ground. I ran back to the tree and sat down, arranging my slate call and box call beside me and rested my gun on my knee.

I used the slate this time, purring a couple of times and turning that into a couple of yelps. The tom answered and was a lot closer this time. I put down the slate and went to work with the diaphragm. It takes hand movement to use the slate, and a turkey has an eyesight about equal to us looking through a 10 power binoculars.

Suddenly he appeared directly in front, walking down the jeep trail that led to this small opening in the timber. I could see him over the top of my decoy and when he spotted the faux hen he gobbled again.

I slid the barrel of the gun a bit to cover him and ducked my head down to the stock. Just like that he turned and ran.

Lesson learned. Never put your decoy at the position where you expect the tom to come in. You want him to be looking at the decoy off to the side, not directly in front of you.

Sometimes you just walk into a bird.

There was a slight rise in front of me and I couldn’t see beyond. Imagine my surprise when I walked over and looked down. There, not 30 yards away stood a tom in full strut. He was looking right at me and whirled and ran off before I could get the gun to my shoulder.

Never walk into a spot blind. Always send out a series of yelps. If there is tom there, chances are good that he will gobble and give himself away. Lesson learned.

Sometimes it pays to be patient. We had arrived at the blind an hour before sunrise. As the roosted turkeys began to wake up we sent out a series of soft tree yelps. We were answered by booming gobbles.

I guessed at least six toms were in that bunch.

The sun came up, the birds came down.

They gobbled at every sound we made.

But slowly they moved away. The sounds of their gobbling got fainter and fainter. Then we watched as the whole flock walked up and over the hill and out of sight. We decided to stand up and stretch. As I looked through the thin stand of trees in front of us I saw a red head looking right at us.

We were busted and the tom ran off.

If we had just sat still for another five minutes he would have walked into view.

Lesson learned. If you are calling to a group of several toms, don’t leave the stand too early. One of them may be coming in.

Yes, you will make a lot of mistakes when turkey hunting. Try to learn from them. It will make you a better turkey hunter.

← Prev: One Small Mistake Can Ruin Your Turkey Population Next: I think its Spring, What we have been waiting for By Gary Howey →