I think its Spring, What we have been waiting for By Gary Howey

As I look out my office window, I realize, that perhaps, the time of the year outdoorsmen and women have been waiting for has finally arrived, Anyway, it’s suppose to be here, but after this last week, I’m not sure.

I thought spring was when things changed from winter to spring, the turkeys would break up from their winter flicks, putting together their harems and really start to gobble, the fish should start to bite and getting things done in the outdoors were the norm.

Well, last week where I’d planned to head for the woods and do some turkey hunting, the wind had really picked up; I thought to myself, thank God, it’s not snowing. I spoke too soon as in came the snow and a late season blizzard and a few days later another, ending my day dreaming about a spring turkey hunt as we had to move wet snow that was piled up over my head,

Yes, turkeys can be hunted in the snow as I’ve tagged several where the Tom had to push snow with their chest to get to my decoys, but as I “matured”, I find it a lot more enjoyable to hunt on nice sunny days rather than those with wind, cold and snow drifts.

No matter what Mother Nature throws at us, spring is the time of the year when things really start happening in the outdoors. We can hunt turkeys, hunt sheds, do some open water fishing, as well as getting ready to hunt morels and asparagus.

It’s a great time of the year, when we discard the long johns and heavy coats, and break out our warm weather clothing.

As I mentioned, spring turkey hunting is on my mind right now, as we have three tags in Nebraska, two in South Dakota and my partner has one in Iowa, so we are going to be spending some time in the woods before the season ends.

In some areas, during last season, we had a big bunch of Toms, but things have changed this year, I was having a problem locating them in their old haunts, they’d changed their pattern and moved to another roosting area.

I generally scout the area a couple of weeks in advance, using my binoculars to check out the hills and valleys where I’d seen them in years past.  This year, not seeing much, no large flocks or even a small harem, so I switched tactics, getting out before sun up and sundown, using my locator calls to get a Tom to shock gobble.

My best bet on a locator call is an owl call, as it always seems to draw a response, a gobble or two, but this year it seems to be falling on deaf ears. Could be the gale force winds I was facing or perhaps the birds’ couldn’t hear the call or I couldn’t hear them. 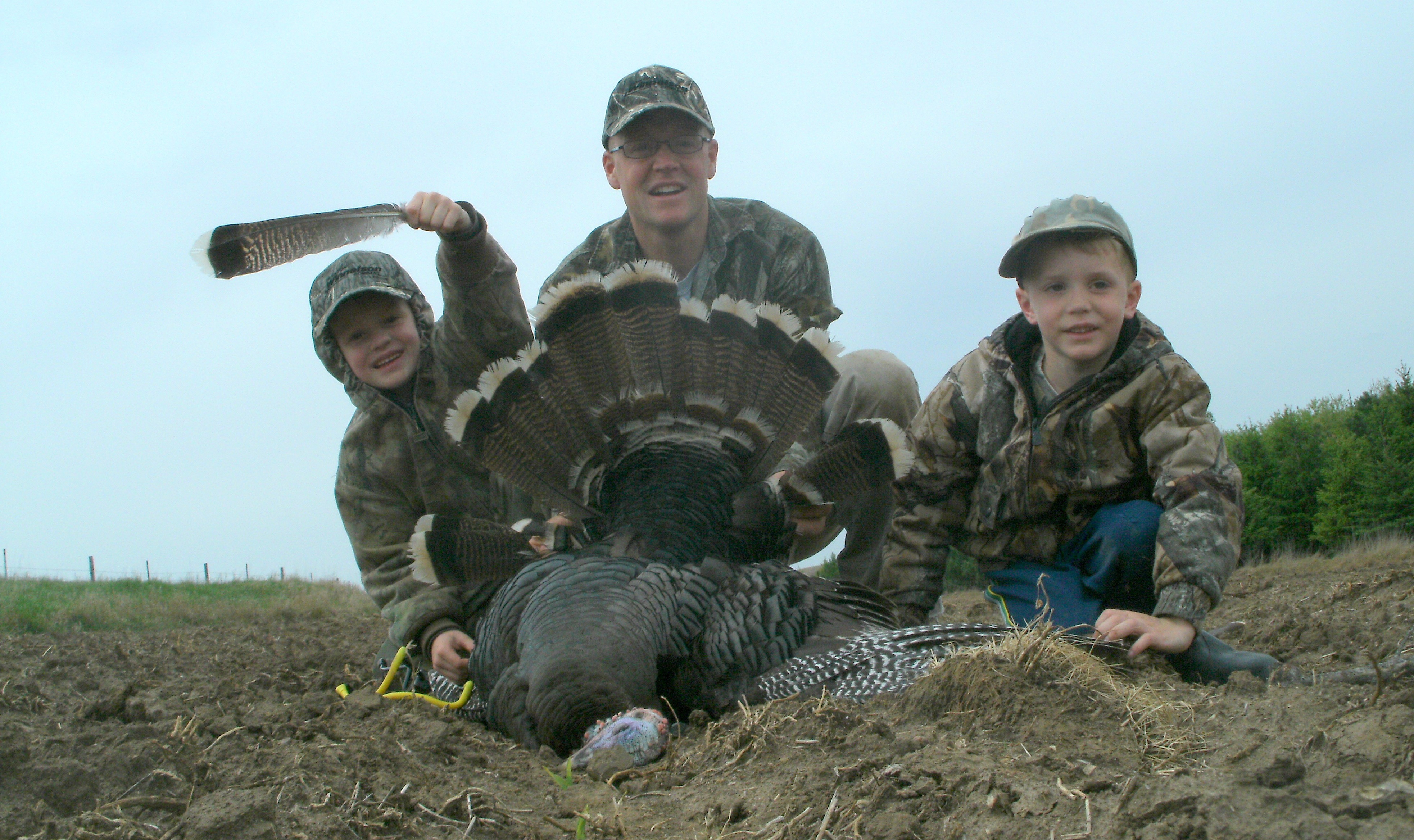 Because of the wind, I had to get closer to their old roosting area to have a chance at hearing a gobble. As I worked along the field edge, the distant sound of a flock of Canada geese could be heard and as I gazed skyward trying to locate the geese, a doe spooked from where she’d been bedded.  I quietly made my way towards the beaver dam blocking the creek, hoping to get below the bank out of the wind when four brightly colored male Wood Ducks and their three female companions erupted from the water.

Grasping my owl call firmly, I called using the old “Who Cooks for You, Who Cooks for You” call, nothing, a gobble, a cluck not even a peep. The birds’ were not there, so I moved on, hoping to locate them farther down the creek.

Making my way back to the truck, through the cornfield, as I crossed the fence, I spotted something shining in the morning sun, my first shed of the season, a four pointer, which came from one of the three bucks I’d seen on my trail camera. It was a good sign that it had made it through the winter and should be a bigger buck this season.

I worked the area for a half hour after sun up with no response and later in the day, just before sun down gave it another shot, with no response. Realizing the birds had moved to another area, my game plan would have to change before the opener.

At times changing a game plan can be a monumental task, while other times, it can be as easy as relocating less than a mile.

I always have a Plan B, this year; it seemed that I might not have a Plan A, as things just weren’t coming together. With the weather change, I was starting to think that perhaps this season would be a bust.

Then, the following morning as the sun came up and the temperatures started to rise, things changed and suddenly seemed brighter.

To some this may have been a wasted trip, as I was trying to locate a flock of turkeys, but to me, it was a success as I’d seen geese, ducks and deer, coming back with yet another shed to decorate my office.

There’s  plenty of time before the turkey season opens to scout and with warmer weather on the way, and  less wind, there’d be other trips into the field, giving me ample opportunities to spend time in the outdoors to not only hunt, but to enjoy all the Mother Nature and the great outdoors has to offer.